The winners were announced as part of a gala dinner during the 2018 AWA annual conference in Mackay. 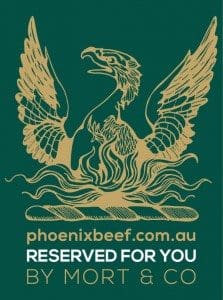 The 2018 competition attracted entries from most Australian states, judged in three divisions for Fullblood, crossbred and commercial striploin steaks, all assessed in a heavily controlled environment by an expert panel on tenderness, flavour, juiciness and overall liking.

Cattle for Mort & Co’s The Phoenix program are fed a minimum 400 days, producing minimum marbling scores of 4, but ranging up to 9.

The brand is predominantly directed into the China chilled premium beef market for use in high-end restaurants and hotels, with other important markets in Korea and across southeast Asia, Europe, and shortly, also the US.

The winning entry was from an F2 feeder steer sourced by Mort from Selwyn Maller’s Hamilton Park Pastoral Co north of Wallumbilla, east of Roma.

Mort and Co meat sales and marketing manager Tim Burgess said the win reflected the commitment of a lot of people along the supply chain, from the breeder to the livestock and milling team at the feedlot, to the processor. “Everybody in the chain contributes to the result, so the kudos is well-shared,” he said.

“It’s about selecting the Wagyu genetics that we know are going to perform, and feeding that carcase performance back to our feeder cattle suppliers, to allow them to constantly improve their herds.”

While Phoenix currently accounts for about 300 bodies per month, numbers on feed at Grassdale are growing, and the program will scale to ‘bigger numbers’ heading into 2019.

“Although still quite new, by brand standards,The Phoenix has already established a strong reputation in the Shanghai market in China, and is extending out into other big Chinese population centres like Dalian and further north,” Mr Burgess said.

Product from the winning Mort & Co entry was featured as one of a dozen conference charity auction items sold last night, bought by Jane Hughes, Hughes Grazing, Nebo. The winning bid of $8500 meant each of the chilled rib-eye The Phoenix steaks cost more than $1000. More on the charity auction in a separate item.