IMPORTS of Australian beef into South Korea will be significantly impacted by tariff adjustments in coming days, as Australia approaches its Safeguard tariff mechanism trigger-point for the year. 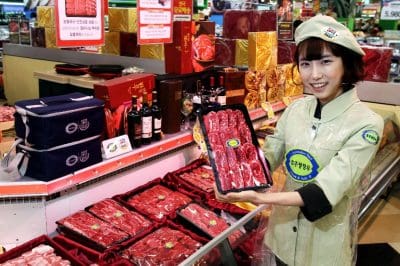 Department of Agriculture statistics show that as of yesterday, Australian beef entering Korea had utilised more than 97 percent of its 2021 Korean safeguard volume (177,569 tonnes).

The trigger point is likely to be reached in coming days. Once it is reached, the duty rate on Australian beef entering Korea will rise from 18.6 percent to 30pc for the remainder of the calendar year.

Importers anticipating the tariff rise have in fact increased their intake of Australian beef over the past month, in an effort to minimise the tariff impact on their business, Beef Central was told.

South Korea snuck ahead of the US in trade volumes recorded during the month of October, accounting for 14,900t of Australian beef. That was up almost 9pc on the previous month (13,700t), and a similar rise on October trade last year.

South Korea remains one of Australia’s most stable markets, year-on-year, with ten-month trade (not including offals) to the end of October reaching 131,600t, up 2.8pc on last year.

The tariff adjustment will temporarily widen the tariff rate advantage for US exporters consigning beef to Korea, which is currently tariffed at 13.3pc.

Australian product shipped prior to the date of the safeguard trigger that has not yet cleared customs will be allowed to enter at the 18.6pc rate, with the excess tonnage deducted from the 2022 Safeguard volume.

Since the Korea-Australia Free Trade Agreement was enacted, imports of Australian beef have often triggered the annual safeguard, but the threshold is likely to be reached much earlier this year. Last year the safeguard tariff was not triggered until 25 November.

Canada experienced a similar Safeguard tariff rise for its pork exports to Korea this week.