Ten months ago, Beef Central published a discussion paper written by independent industry analyst Simon Quilty suggesting that the Australian beef industry might be about to enter a two-year ‘Super Demand’ cycle. Has anything changed to alter than view?

I’VE not long returned from four weeks of business travel in North America, Europe and Asia where I saw first-hand how meat demand is and the general economic feeling across these continents.

There is strong anecdotal evidence that beef demand is good in both developed and developing economies and in particular, the US domestic market.

The US economy is thriving along with many other global economies and in the last quarter of 2017 much of the statistical data from Australian and US exports have supported these findings. This point has driven me to re-examine predictions made back in April 2017 on the prospects for a ‘Super Demand’ cycle, and to review my belief at the time that we were at the start of a two-year strong demand cycle globally that would see beef prices remain firm and rise progressively for all of 2017 and 2018.

So is this ‘super demand cycle’ alive or dead?

The original discussion paper published last April raised the possibility that the global meat market was heading into an unusually strong period of demand, that I termed the ‘Super Demand’ cycle.

When defining the ‘Super Demand’ cycle and looking at common characteristics, the following characteristics were identified as being important indicators:

In each instance 2017 lived up to my expectations of strong demand with firstly, global and US beef prices indeed moving in tandem both increasing by 9pc; US and global meat production were up 4.3pc and 1.5pc respectively; and US exports remained very strong, being up 15pc globally with Asia continuing to be where the largest demand came from.

All indications are that 2018 will see strong global demand continue.

In short, the ‘Super Demand’ cycle is alive and well, and on track to continue through 2018. I am now wondering if it will extend into 2019, as many of the key demand drivers are showing signs of remaining in place potentially into next year.

US economy and US meat demand

The US economy is in extremely good shape and the one common term I kept hearing when traveling recently was ‘growth’ – whether it was food manufacturers or other industries such as aviation, steel or pharmaceutical production the same message was  ‘growth, growth and more growth’. Almost all US sectors were expanding, building bigger factories and most importantly employing more people.

The US meat market has been described by many as the engine-room for global beef prices. As highlighted in last year’s original discussion paper, I thought that during this period of ‘Super Demand’ that global beef prices were having a bigger influence on US prices than vice versa.

But I am now willing to concede that in 2018 the US might rule the day, given the extraordinary strength of the US economy.

Some key points to note out of the US economy:

US unemployment is at 4.1pc, which is the lowest level in 17 years and the second lowest in three decades, with the only other lower unemployment period being Q4 of 2000. Effectively it can be argued the US economy is in full employment.

US Consumer sentiment index: A recent Urner Barry market report noted a University of Michigan consumer spending survey, where chief economist, Richard Curtin was quoted saying, “the data indicate a robust outlook for consumer spending that extends the current expansion to at least mid-2018, which would mark the second longest expansion since the mid-1800s. While the early October surge indicates greater optimism about the future course of the US economy, it also reflects an unmistakable sense among consumers that economic prospects are now about as good as could be expected.”

US Manufacturing PMI: Increased to 55 in December of 2017 from 53.9 in November and beating market expectations. The reading pointed to the fastest expansion in manufacturing since January amid sharper increases in production, new orders and employment.

US Tax law changes: Passed just prior to Christmas, the Tax Cuts and Jobs Act was signed by President Trump on December 22, and promises to bring financial benefits to US meat and poultry processors.

Some of the key initiatives from the law include: 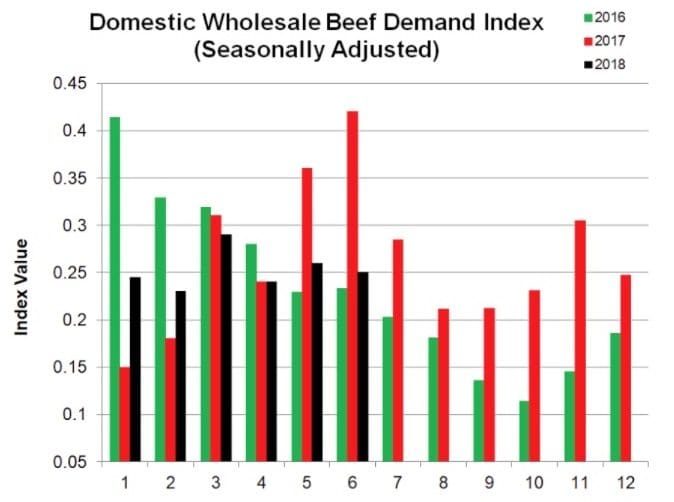 The draw-down in November cold storage stocks indicates that US domestic protein demand remains in good shape, the total supply of beef, pork, chicken and turkey in cold storage at the end of November was 4.9pc higher than a year ago and 10.2pc higher than the five-year average. But importantly, the draw-down in stocks during November was 10.7pc, compared to 9.3pc average of the last five years. What was particularly noticeable was the drop in pork inventory, considering the increase in slaughter capacity and additional production in the last few months.

I am still of the opinion that export demand is having a major impact on US domestic pricing and given the strength of the US economy, I believe US consumers will continue to pay higher prices for beef and all other proteins. 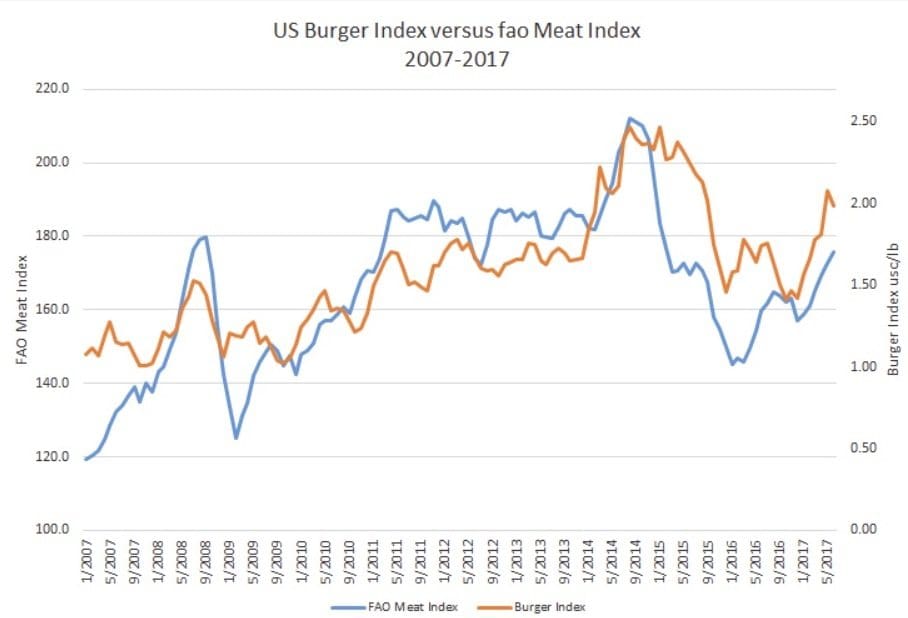 I do put an important caveat on this view, outlined below. That is that competing meats, and in particular chicken, could change this view and lower this price expectation if chicken production is 4pc or higher (compared to last year). USDA forecasts at the moment are for a 1.6pc increase in production.

When first looking at global beef demand last April, there was much anecdotal evidence that supported the belief that demand was good in Q1 of 2017. 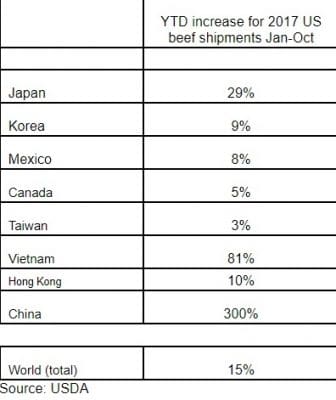 This momentum did not change for the rest of 2017 and is continuing into 2018 and potentially beyond. Two very noticeable examples of strong demand have been:

The fact that quota levels into both Japan and Korea were triggered by the US and Australia throughout the year – meaning both countries shipped large quantities of beef and forced extra duties to be imposed on each countries beef as a result of strong demand.

US beef exports were up globally by 15pc for 2017 compared to Jan-Oct 2016 and 25pc higher compared to the same period in 2015. This was to all key destinations but in particular to Asia with 80pc of the increase in exports going to the Asian region. Japan took the lion’s share of the increase followed by Korea – but it continues to reiterate belief that the growth in global demand is in Asia.

There continues to be strong anecdotal evidence that global demand for beef is strong, and will continue through 2018 and possibly into 2019:

I am intrigued by some of the market price forecasts in recent times suggesting that due to an increase US beef production this year (likely to increase by 4.8pc this year) that US domestic prices will fall. I do not follow this logic, nor believe it.

The concern with this view I believe is that US demand continues to be under-rated by many market participants in terms of its ability to cope with the larger volume of red meat and poultry. Once again it is the fear of the ‘wall of meat’ that is continued to be talked about – but such a prospect is always talked of at the start of any year in which more supply is expected, and this year is no exception.

What is important to note is that increased US supply is already here, and Q4 of 2017 saw an increase in beef of 3.6pc and an increase of total meat protein supply of 2.8pc and yet beef prices traded significantly higher year-on-year, with beef cutout prices 8.7pc higher and fresh 90’s prices traded 11pc higher. Yet production was up significantly across all meat items – the supposed wall of meat came and went.

This can only mean that US demand is outperforming supply in Q4 in what is often regarded as an average demand period normally.

I cannot help feeling that the US domestic demand has shown that it will continue to absorb the increased beef supply, and is willing to pay more in terms of pricing which during a ‘Super Demand’ cycle period is not unusual. Even with the last quarter increased supply and pricing tells me that this phenomena is alive and well. What is unique about this demand period is the continued strong influence of export demand on US beef and the presence of China as a third strong export market that will ensure, I believe, a sustainable Super Demand cycle that might extend beyond two years.

The continued growth of the middle class globally is one of the key reasons that demand has remained strong. This is well-highlighted in a paper recently released by the Brooking Institute titled, ‘The unprecedented expansion – the global middle class’.

Some of the report’s findings include:

When I spoke directly to the author, Homi Kharas he outlined to me that beef and fish were the preferred option in many of the Asian countries of the middle class as their personal wealth grows.

Similar findings were found in a survey/report commissioned by Euromonitor International released in 2015 which also found in China, the popularity of pork was falling amidst a number of pork supplier safety scandals and public health campaigns designed to encourage the consumption of lower fat protein options.

In the findings Euromonitor International found poultry was facing similar issues due to heightened regulations relating to recent bird flu epidemics at the time. It said these factors combined have made beef and veal the fastest growing meat category in volume terms in China, growing at a per capita rate of 5pc in 2014. Fish consumption is also growing in China as a result of similar health trends, although the premium seafood segment has lost considerable momentum due to the country’s anti-indulgence movement.

There is no doubt that competing meats are one of the major threats to the continuance of the ‘Super Demand’ cycle for beef. Significantly cheaper pork and chicken could impact the price paid for beef through 2018 and 2019.

In each instance an increase is seen in in supply and pricing, which points to expected strong demand across all protein sectors in the US.

There are differing views among analysts in the US regarding chicken production forecasts, with many of the opinion that 2018 chicken production could be closer to a 4pc increase on last year due to the growth in the breeder stock and as a result are calling pricing to fall potentially 3-10pc, which is an interesting contrast view to the USDA outlook.

Should the forecast on chicken prices falling in 2018 by 3-10pc due to greater volume than expected, then the projected 6-16pc increase in US and global beef prices could suffer, placing a strong dampening effect on the global beef market.