Is Australian and NZ beef out-competing domestic beef in the US market?

Independent meat industry analyst Simon Quilty looks at the performance of Australian and NZ imported beef in the US market, and comes to some interesting conclusions over future prospects for price premiums for lean grinding beef

IN MY previous discussion paper providing a ‘report card’ on Australia’s global beef export performance, I had Australia’s score in the US market at 8/10 (click here to view previous report).

I would give New Zealand’s beef exports into the US the same score, and I answered the question of whether Australian and NZ beef was out-competing domestic beef within the US market with a resounding ‘Yes.’

I promised to elaborate on this in more detail in a later paper, and explain why I think this premium is likely to remain in place for the balance of this year.

In fact I believe it will reach a record average premium over US domestic 90CL manufacturing beef of close to US10-12c/lb. Australia’s (and New Zealand’s) cow 90’s normally trade at a US3.5c/lb discount to domestic US product, based on the last 16 years’ average.

The only period I believe due to seasonal factors Australia is likely to trade at a discount this year will be for 4-5 weeks during late May and early June. The rest of this year is likely to be at a premium over domestic US supplies, with the potential that in October and November this premium could reach an unprecedented level of US30c/lb.

In today’s US market, imported 90 CL meat is trading at a US2.5c/lb premium to domestic 90’s and in the previous four weeks this had ballooned out to US12.5c/lb. This was highly unusual, but it has occurred before – in the past 16 years, it’s happened five times, to be exact, but only once in 2011 to this level of premium.

The simple reason is the lack of imported meat being shipped to the US and in particular by New Zealand, with their beef shipments down by 25pc year-to-date, due to China buying NZ lean meat away from the US. The US domestic hamburger market has relied heavily in the past on the availability of lean meat from both Australia and NZ over many years, but since the rise in demand out of China, lean beef exports from NZ have been diverted into China in increasing quantities, which has seen a critical shortage of imported lean meat in the US. As a result, an imported price premium has evolved. 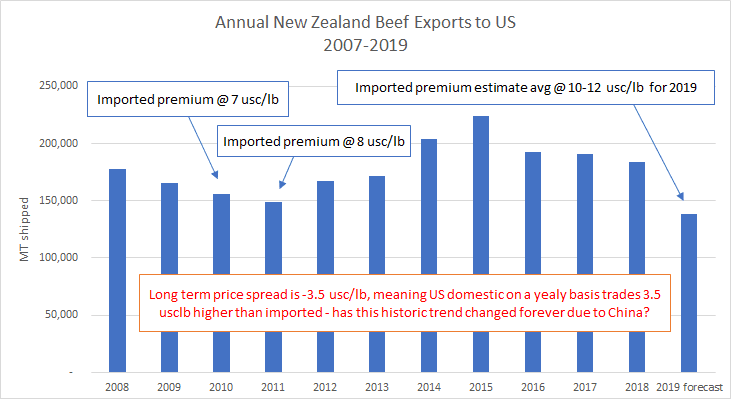 The following graph highlights the other significant years of imported 90 CL beef premiums and when they occurred. In short, the tighter the NZ supply, the higher the premium, and this year is on track to be the tightest supply year ever in recent history.

Why is imported 90 CL meat trading at a premium?

Why is imported 90 CL meat trading at a premium over domestic fresh 90s?

In 2010 and 2011 the premiums averaged US7c/lb and US8cc/lb respectively, and with this year’s NZ shipments to the US expected to be even lower, I would not be surprised to see imported 90 CL premiums average US10-12c/lb above US domestic 90’s.

What is a more sobering thought is that during the fourth quarter of this year, we could see imported move to a US30c/lb or greater premium as meat gets even tighter due to Chinese New Year buying.

What does this mean going forward?

What does this mean going forward for imported and domestic 90’s, should these trends continue?

The challenge is trying to put a value on where domestic 90s might be at for the balance of the year. The following are forecasts done by Kevin Bost (Procurement Strategies Inc, out of Elgin, Illinois) on US domestic cow, steer and heifer weekly slaughterings. In both instances he has Q3 and Q4 US domestic slaughterings on par with last year.

The interesting scenario to me is that given the 6-7pc larger weekly US cow kills compared to last year seen in the last six weeks, yet domestic 90 CL prices are almost identical year-on-year. But with more cow meat volume, it points, to me, to strong US demand for grinding meat. So should the forecast of cow supplies fall in line with last year’s supply, but demand remains robust, it could be argued that domestic 90 CL pricing will be firmer than last year for the balance of 2019.

Using 2017 and 2018 as two potential scenarios of domestic 90 CL price movements, and the belief that NZ exports remain at 25pc less than last year, the following are potential ‘what-ifs’ on imported 90 CL pricing.

Most importers would be hoping the 2018 price scenario is the likely outcome, and most exporters in Australia and NZ would be hoping 2017 is the likely scenarios. Either way I believe there are two definites in the market – firstly, imported NZ beef supply is likely to be extremely tight in Q3 and Q4 this year and secondly, there will be strong China demand for 2020 Chinese New Year.

Both factors reinforce my belief that there could be a US10-12c/lb or greater premium on imported 90 CL this year over US domestic 90 CL.

Has this price trend changed forever?

Has the normal price trend changed forever – will imported 90’s now always trade at a premium?

In the meat trading world I am reluctant to say that Australia and NZ meat will hereafter always trade at a premium in the US market (with the exception of mid-May and early June time periods) but I am confident that for the next two to five years, there is a good chance this will be the case, provided China’s buying interest remains the same or increases further.

What could change is that a US12c/lb imported market premium may pave the way for cheaper South American meat to enter the US and fill the supply void created by Australia and NZ meat going to China. In particular, Brazil which has been desperately trying to regain its export status into the US market for close to two years, might be a candidate.

The problem with this thought process is that China is desperately trying to buy South American meat also, and Brazil is China’s largest beef exporter. In January this year Brazil accounted for 22pc of the China beef import market, Uruguay at 22pc, Argentina was at 21pc, Australia at 17pc and New Zealand at 14pc.

So there is no guarantee that South American meat will fill the void in the US as China’s demand is omnipresent globally, and all beef export roads lead to China. 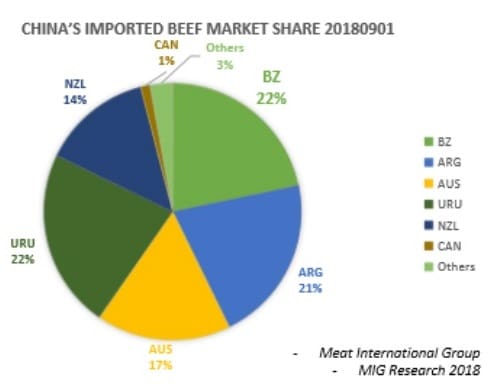 There is some talk around of the US cattle herd entering a liquidation phase in either 2020 or 2021. I think this could have the potential to lower overall beef prices and reduce the reliance on imported beef.

Therefore the premium gap of US12c/lb might fall, but if lean imported meat remains tight (or becomes tighter) this premium might be less, but still remain above US domestic prices, albeit at a narrower premium spread. So for the at least the next five years, cheap Australian and NZ beef compared to domestic US beef might be a thing of the past.

The buying tentacles and influence of China on the global market lately just doesn’t seem to be going away, and with the diversion of lean meat into China from Australia, NZ and other key supply countries, it is hard to see over the next five years this trend changing.

The impact on global grinding meat markets goes well beyond the US and into other key manufacturing markets including Japan, Indonesia and Korea, which all points to strong ongoing demand as each market vies for the same grinding meat.

I have not mentioned the added influence of African Swine Fever on global demand, but this will just add more fuel to the fire as protein supplies in China and other parts of Asia tighten further as the disease spreads. In years to come, an average yearly premium of US12c/lb for imported 90’s over US domestic 90’s might seem cheap, and something we tell our grandchildren about as we talk of pre-ASF days and post ASF days.