Indonesia to import 50,000t of beef from Brazil Indonesia’s decision to grant a new quota to Brazil follows a recent unexplained downturn in Indonesian imports of frozen buffalo meat from India, thought to be at least partially caused by a new foot and mouth disease (FMD) vaccination program in India limiting available volumes for export. 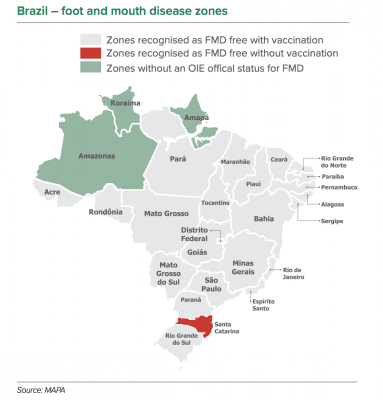 Most Brazilian cattle are located in areas classified as ‘foot and mouth disease free with vaccination’.

Australia helped Indonesia to achieve freedom from FMD in the 1970s, providing valued regional freedom from the contagious livestock disease. Indonesian moves to allow buffalo meat imports from India in in recent years have raised concerns about potential implications to the entire region’s hard-won FMD-free status.

The likelihood that Indonesia would soon open its market to beef imports from Brazil has been growing for some time.

Representatives of Indonesia’s Ministry of Agriculture visited Brazil to audit beef plants in the country March last year and meat traders from Brazil were reported to have visited Jakarta in June.

The quota will be effective for the next 12 months.

In comments to Indonesian media Minister Enggartiasto denied that the decision to import significant quantities of Brazilian beef was a direct implication of Indonesia’s loss against Brazil’s recent challenge over chicken meat imports in the World Trade Organization’s dispute settlement council.

Enggar told the Detik news agency the discourse on importing Brazilian beef had long been wanted to be done so that Indonesia would not depend on Australia in fulfilling domestic beef consumption.

“No, it was from the beginning. Brazil asked, and it is good that we do not from one country. If we only depend on Australia, we will be dictated with Australia.”