Although early feedback has been mixed, some retail and wholesale lamb suppliers reported significantly increased demand in the lead-up to the national holiday.

MLA’s group marketing manager Andrew Howie last week said some of the demand in the lead-up to Australia Day would be price-driven with the major supermarkets offering lamb legs at $8/kg, a discount of almost $4/kg.

But Mr Howie said one retailer indicated lamb orders over the counter were up 3 percent in the week following the launch of the controversial Never Lamb Alone campaign on January 10 on social media.

“I don’t know what that 3pc equates to, but I do know that is 3pcv more than at the same time last year.”

He said it was hard for MLA to delineate at the moment what was price-driven and what is campaign-driven, but the volume and value of sales during the Australia Day campaign would be analysed.

“Though obviously there is an interdependence between the two: there is a reason why they are running their promotions.”

But Mr Howie said the retailers know they don’t need heavy discounting to drive lamb sale volumes. He would prefer they ran promotions close to their normal retail prices to maximise value to producers.

Last year MLA reported a 35pc lift in lamb sales leading into Australia Day, a 24pc rise the year before and a 48pc increase in 2013.

“We won’t know this year until probably March by the time we get all the data through from everybody and compile it.

“We set a target of 15pc this year, which sounds low compared versus those last couple of years, but what we are trying to manage is a Tuesday Australia Day holiday – so how are people going to behave?

“I would say a lot of people will still have a barbecue for Australia Day, but it is quite different if people don’t have the full weekend to party,” he said.

“The last time Australia Day fell on a Tuesday was six years ago and I think we only managed a 7pc increase, but the campaign has evolved a lot in six years.”

The controversial kale-torching 2016 MLA lamb ad featuring SBS newsreader Lee Lin Chin as the mastermind of ‘Operation Boomerang’ to rescue Aussies overseas from a lamb-less Australia Day – has had more than 5.2 million views on social media. 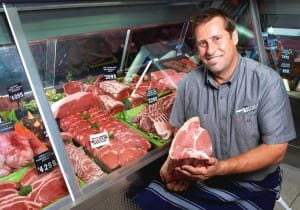 Western Australia’s Naked Butcher, Gary Hine, (pictured) said his lamb sales were strong leading up to Australia Day “as they always are.”

“We find that the more controversial the campaign is, the stronger the lamb sales are, which is great.

“The products we sold were pretty much across the board – butterfly lamb legs went well, shoulders on the bone went well, lamb banjos (blade and shoulder bone with shank), French cutlets were a big seller,” he said.

But he said the campaign only worked for the two weeks up to Australia Day and some in-store material would also help.

“It needs to have some sort of follow-up to it.

“Last year we were about 32pc up on our lamb sales for the same week and this week we were another 4-5pc up on that.”

Mr Howie said the association between lamb and Australia Day has been built up over time, but it needed continual reinforcement with consumers.

“Now it is at the point where we need to reinforce the message, reinforcing positive associations between the two, which the notion of ‘you never lamb alone’, which is a more positive way of bringing the message to life.”

But he disagreed that lamb had ‘claimed’ Australia Day in consumers’ minds.

“If we were to stop communicating, the impact would not be instantaneous, but in subsequent years you start to see that (demand) diminish.

“What you rely on is a purposeful reason that’s new or unique from the year before,” he said.

“Last year it was Richie, this year we had Lee Lin Chin and next year we’ll probably come up with something completely different.

“So what you do each year is remind people and reinforce that behaviour because not everyone buys the product – we’re trying to ask that they choose lamb over something else.”

Mr Howie said retailers were starting their lamb promotions earlier to coincide with MLA campaigns, with some in-store campaigns running for two weeks before Australia Day.

“The spring campaign is starting substantially earlier these days, as early as August, whereas there was a time when they used to try to push us out to October because the flush wouldn’t come through.

“By getting consumers in late August they can run them all the way through to Christmas.”

Kerry Melrose and son Dominic, whose Brisbane-based Royal Chef Selection wholesale business specialises in premium lamb out of Tasmania sold under their Tasmanian Royal Reserve brand suggested that the ‘longevity’ of the Australia Day campaigns had general improved over the years.

Kerry Melrose said the Australia Day spike in his business’s wholesale sales had been ‘quite good’ this year – perhaps 25pc higher than a normal trading week.

“But the real effect of Australia Day on lamb does not get felt until the week after, because a lot of butchers build stocks of lamb leading up to the day, and if sales don’t measure up to expectations, they may compensate with reduced sales the following week. We’ll have a better idea by the end of this week.”

Mr Melrose said he would have preferred to see Sam Kekovich ‘more involved’ in the 2016 Australia Day campaign, rather than playing a bit-part for the past two years. “I think the campaign has lost some impetus by not featuring Sam more, because he translates into sales.”

He was critical of the heavy discounting on lamb by the two major supermarket groups last week, sacrificing lamb as a ‘loss leader’ to get customers through the door.

“Selling lamb loin chops at half price makes no sense, when the customer would pay the full price anyway at this time of year. It’s all about sacrificing profit on one item into order to lure the customer into the supermarket to buy everything else.”

“I find that very disappointing at a time when so much industry money is ploughed into promoting a product which is already in high demand at this time. It’s a day when most Australian desperately want to eat lamb. Why would you cut the price in half?”

“Unfortunately lamb has been caught in the crossfire between the two big supermarkets, which are battling for market share. They were selling loin chops last week for $10.99/kg. That’s ridiculous. Prior to Australia Day, the supermarkets were around the $20 mark, as were many independent butchers.”

Australian Meat Industry Council national retail council chairman, Brisbane butcher Ray Kelso, said at this stage in his own outlet, Australia Day lamb sales had been strong, but perhaps not as strong as in past years. 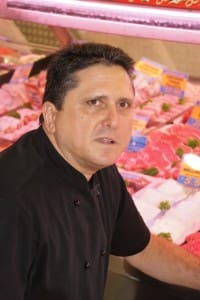 “There’s no doubt the promotion via social media aroused a lot of attention, but I don’t believe that related well to lamb sales in retail butcher shops,” he said.

“MLA may have spent a lot of money on social media promotion, but it did not provide much support at the point of sale, in the butcher shop.  It was very limited, and very disappointing,” Mr Kelso said.

“In years gone by, the Australia Day lamb campaign represented good sales for about a three-week period – a couple before, and a week or so after. But we’re not really noticing it that much this year, in our shop,” he said.

“My wholesaler is telling me his lamb sales were up 20 percent last week, which is only to be expected in the lead-up period, but what will be interesting will be how long that demand hangs on. If there is no sales of lamb the week after Australia Day, it will be less than successful.”

“I don’t think it is a pricing issue – lamb has been up there in price for quite a while now. It’s just that it lacked that call-to action, through in-store point of sale promotion this year,” he said.

“It’s easy to hit the ‘like’ button on social media, but that does not necessarily translate into people walking into butcheries to buy more lamb. I’m not convinced,” he said.

Retail customers were still happy to pay well for a good product, provide it performed well and consistently. “Consumer spending is tight, but we are not hearing comments over lamb prices,” Mr Kelso said.