Global beef prices may be set to rise, analyst suggests

WHILE supply-side issues have driven the beef market in Australia over the past two months, the demand-side of the equation may be about to re-exert greater influence

Independent meat market analyst Simon Quilty says tightening of US beef production, improved China demand and moving out of the traditional lower seasonal global pricing low period of September is likely to see an improvement in pricing for the fourth quarter of 2017, starting October.

This will lead into a strong global build-up for the 2018 Northern Hemisphere summer as we move into Q1 and Q2 of next year,” Mr Quilty said.

“The recent setback in Australian beef pricing I believe is a short-term issue,” he said.

“The fundamentals of strong global demand are still present in today global markets, but in the last two months we have been caught-up in a supply-driven market, compared with the demand-driven market that drove global beef prices in the first six months of 2017.”

After September, Mr Quilty’s research suggests that beef will be back in a demand driven market – albeit a mildly strong demand – but moving into the northern hemisphere summer, that demand-driven market was only likely to strengthen, he suggested.

“The benefits to Australia in Japan’s Safeguard tariff rise on US beef will be realised after September, as supplies tighten due to lower US production and increased demand from China, as Japan looks to Australia to meet its needs and take advantage of the 22.5pc tariff advantage over US beef.”

He suggested this window of opportunity for Australia through tariff advantage in Japan was likely to be only short-lived, however, lasting only until late December, as Japan looks to the US to rebuild its stocks in the first quarter next year for post March 31 arrival.

Degree of gloom and doom evident

“There is a degree of doom and gloom in global markets today with pricing into Japan, Korea and US markets down in some instances by 10-13pc for August, compared to previous months,” Mr Quilty said. “But evidence suggests this is short-lived, and improved demand globally is not far away,” he said.

“The challenge has been that Australia’s four key markets – Japan, Korea, the US and China – have gone quiet at the same time, but in each market, this is likely to be only short-lived.”

“The US, Japan and Korea’s markets are all inter-related due to the large US production that is occurring, and being supplied into each one respectively which in turn impacts Australia’s beef exports to these same markets. The peak in US production is right now, and once that has passed, the ability for each of these markets to lift will improve significantly,” Mr Quilty said.

The key points driving his view are:

US production at its peak this month

The graph below highlights Mr Quilty’s belief that US production is at its peak for the year and as the US industry moves into the last quarter, its production volume falls away.

“The expectation is a 4pc fall in average weekly production for steers & heifer next quarter. US analyst Kevin Bost and myself are firmly convinced that the US packers have done an exceptional job of remaining current, which has also been reflected in lower carcase weights. This will take pressure off export markets and also domestic beef pricing as well,” he said. 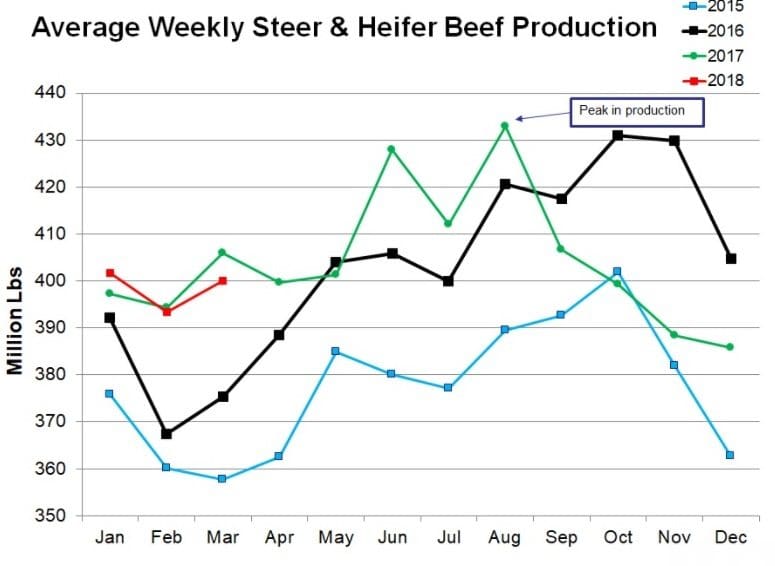 Korea and Japan in the last 6-12 months have received large volumes of US beef imports which have displaced Australian beef. In Korea, displacement has been happening for more than 12 months due to both lower US import duties and cheaper beef, while in Japan displacement has been more pronounced for the last six months due to cheaper US beef – much of which has been going to Yakiniku barbeque restaurants.

Mr Quilty’s graphs below highlight the displacement that has been going on between Australia and the US into both markets. This is best displayed when looking at Korea’s imports from both countries. In the January to June period of 2016 compared to this year’s same period, Australia’s beef exports to Korea have fallen by 13,000t and US beef exports have increased by almost the exact same volume.

“Effectively, US beef has replaced Australian beef, pound-for-pound,” he said. 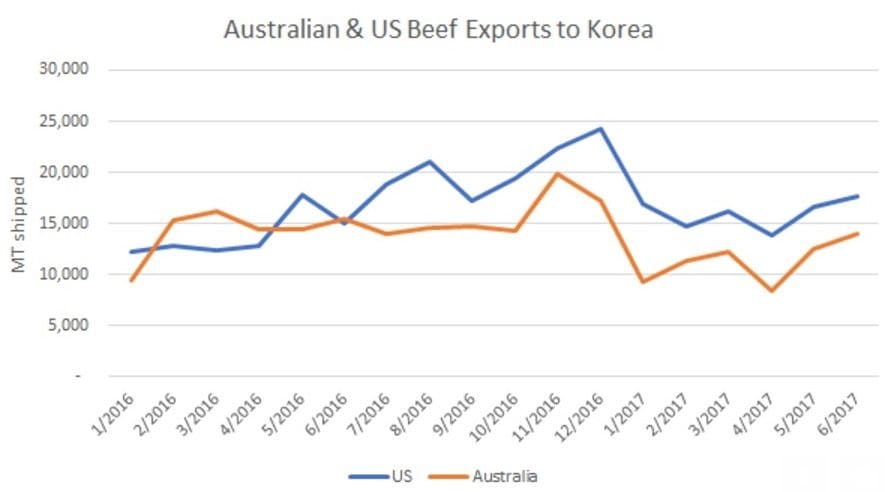 When looking at exports to Japan, the impact of displacement is not as obvious, because both countries have increased beef exports. But the US has increased its exports at a substantially higher pace, and taken market share from Australia.

In 2016 Australia’s market share was at 54pc but this year has fallen to 50pc, while the US share has increased from 38pc to 42pc – due to displacement.

“When looking at again the January to June period of 2016 and 2017, Australia’s volume increased by 27,300t whereas the US jumped an additional 38,000t. The speed of this increase by the US has led to the triggering of Japans snap back tariff,” he said.

Mr Quilty believes the easing in US production in the next 3-5 months will slow down the pace of displacement that has been occurring in both Japan and the Korea, and potentially see greater demand for Australian beef as a result. 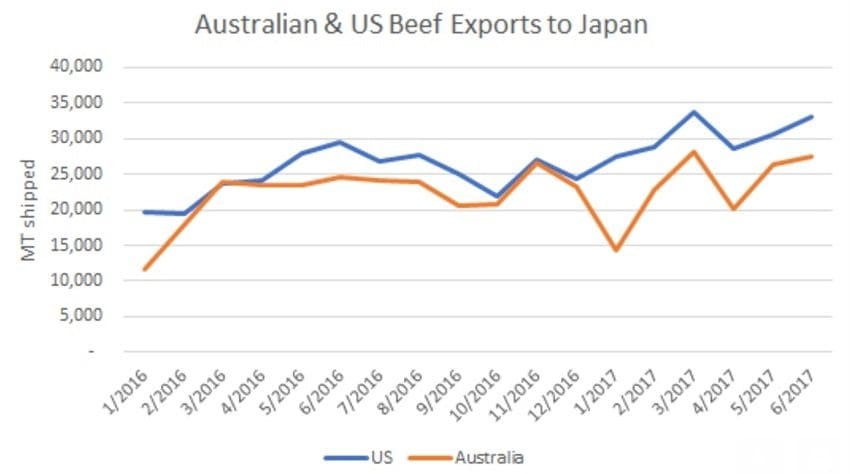 Mr Quilty suggested that almost half the 13pc fall in recent Australian beef price levels can be attributed to the rising A$ in the last four weeks – which has seen a rally from US74.5c to US79.5c.

“The more expensive the beef item the greater the price fall due to currency movements.
Equally with a rising A$ has meant a falling US$ which has seen US beef exports become more price competitive as a result.

The current weakness in beef pricing was without doubt related to lower prices in key markets such as Japan, US, Korea and China, but it should be noted this is not uncommon for this time of year, Mr Quilty said.

“This is a seasonal factor. Normally we see global prices fall 4-6pc from June to September, when the influence of currency is removed the current price fall is in line with historical trends.

“In the last six years of data, the market low for Q3 and Q4 was seen in September, this occurred four times, and single-year lows were seen on months either side of this – August and October. This year the seasonal low may have come a month early, which is what we are experiencing right now, but to be conservative, post-September is likely to see prices improve similar to other years,” he said.

Strong demand likely in first half of 2018

Looking at the global supply and demand picture, Mr Quilty believes the calendar year needs to be divided into two halves – the first six months of the year is where the market demand is driven by the Northern Hemisphere summer and the back half is dominated by supply, as demand eases and supply plays a greater role in price determination.

“Demand during the first half of 2017 was strong globally, which saw prices jump 13pc compared to the previous year – yet Q1 and Q2 supply globally remained almost identical to the same period in 2016. This all points to strong global demand, and there is no reason why a similar first six months of 2018 will also experience strong demand again,” he said.

Beef carried over into last half of 2017

“What has happened in the last half of 2017 is that during the first six months, key export supply countries such as India and Brazil encountered some market disruptions, which saw supply pushed back into the back half of 2017,” Mr Quilty said.

“In addition US steer & heifer production is also peaking for the year this month. The combined impact of these factors has created a drag on global prices.

“India and Brazil’s market disruption have been well-documented, but in brief, the Indian Government placed a ban on the sale of slaughter cattle and closed many illegal slaughterhouses, and in Brazil ‘Operation Weak Flesh’ saw a temporary banning of Brazil meat by many countries after a police investigation into alleged bribery of food sanitation inspectors.

In both countries production was disrupted and saw beef supply pushed back into the later part of 2017.

Mr Quilty estimated that between India and Brazil, close to 145,000t of beef had been carried over from first to second half of 2017. “This is in part playing a role today on dampening beef prices,” he said.

There is no doubt that the 13pc fall in prices in Australia is a combination of currency and seasonal factors, but there has been the additional impact of China’s ban on six Australian beef processors that has acerbated the fall in prices, Mr Quilty says.

The temporary ban came into place on July 25, applying to chilled & frozen beef and sheepmeat. China’s quarantine agency claimed labels on some boxes of exported meat do not match the labels on the packets inside (see Beef Central’s earlier story).

China recently sent inspectors to Australia to audit the six processing plants. Exporters are now waiting to hear news from Chinese authorities on whether the audits were successful and that operational labelling concerns have been addressed.

There is no doubt Australia needs the Chinese market open to all Australian processors so that meat is not being displaced both locally on our domestic market and/or in other markets that may already have adequate supplies and therefore placing unnecessary downward pricing pressure.

“As we move into the last five months of the year, this is a key demand period for China, and a speedy resolution for the six Australian processors banned is needed to capitilise on this period,” Mr Quilty said.

“China relies on four key export countries – namely Brazil, India, US and Australia and each play a crucial role in supplying Greater China – which I believe should include Vietnam, Hong Kong and Mainland China. Without the inclusion of Vietnam and Hong Kong, you cannot get a true picture of China’s needs due to the large amount of cross border trading.

This impending improved demand period in China between September to November among all key supply countries was critical in ensuring the tightening up of global beef supplies and enabling prices to improve, he said.

“In 2016 during this period import volumes into this region increased 50pc compared to the previous three months and at the same time Australian prices into China improved 11pc – so increased volume and increased pricing into China all points to strong demand at this time and the ability to remove excess global beef supplies.”