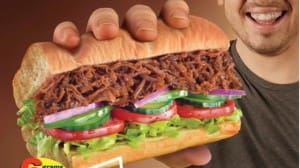 Since we published this item on the emergence of pulled meats on the Australian retail and food service market just a few weeks ago, there has been a rash of pulled meat adoptions and product launches, including items from some of the biggest food service operators in the country.

Importantly, the campaign makes a ‘low in fat’ claim (8 grams of fat or less per serve), as the product is based on slow-cooked pulled lean brisket and knuckle meat.

Australia is the Subway brand’s largest market outside North America, with more locations than any other chain. In March 2011, there were 1254 Subway outlets operating across the country. The most popular menu items are the steak and cheese, meatball, and sweet onion chicken teriyaki subs.

Again the products will be heavily promoted through mainstream media.

Domino’s has more than 600 stores across Australia and 1300 worldwide. It is now the fifth largest Quick Service Restaurant (QSR) chain in Australia by network store number, behind Subway, McDonald’s, KFC and Red Rooster.

The pulled beef trend applies even more pressure to a beef market segment – in secondary, lean cuts like briskets, knuckles, topsides and rounds – that is already under enormous pressure from unprecedented US 90CL export demand, compounded by high demand out of China and elsewhere.