GLOBAL beef prices remained strong in the first quarter 2018 with increased global export supply expected throughout the rest of this year.

As Beef Central published earlier, 2018 is shaping up as an all-time record year for international beef trade volume, with large growth being seen in exports out of the US, various South American countries, and India.

The current global situation, analyst Simon Quilty believes, is due to a ‘demand’ driven market, as opposed to four years ago in 2014 which was a supply driven market. All current indications show that present international beef demand is strong, and at least for the balance of this year, likely to continue.

The challenge is trying to determine how sustainable these global prices are beyond 2018, and for what length of time, given global beef supply is likely to increase for the next 4-5 years.

As highlighted below in this report, 55 percent of all global exports now go to Asia, of which Greater Mainland China is the largest single market. The growing middle class is critical to maintaining demand throughout Asia.

There has been lots of discussion about the strength of global pricing and much anecdotal evidence to support it. The purpose of Mr Quilty’s report is to measure this price strength and to try to understand what is driving it. Following reports in this series will look at how sustainable the increase in global demand is, and whether pricing is likely to continue to rise beyond 2018.

Super Demand Cycles (see this earlier Simon Quilty report on this topic) in the past have lasted only two years, but this current cycle may continue on into next year and beyond.

Points to note in this report:

Global beef export supply continues to grow and so do prices

Both global beef export supply and pricing increased in 2017 compared to 2016 by 24pc and 4pc respectively, and Q1 2018 is starting in the same vein with prices 6pc higher YOY and supply up 4.5pc.

2014 is a comparable year but driven by different fundamentals

In 2014, global exports began the year similar to this year with a large Q1 volume. As the graph above highlights, export volumes continued to grow throughout 2014 and at the same time prices also rose 20pc by October that year. This market to me was a supply driven market, whereby tightness of beef supply in key supply and demand countries resulted in this dramatic price rise. 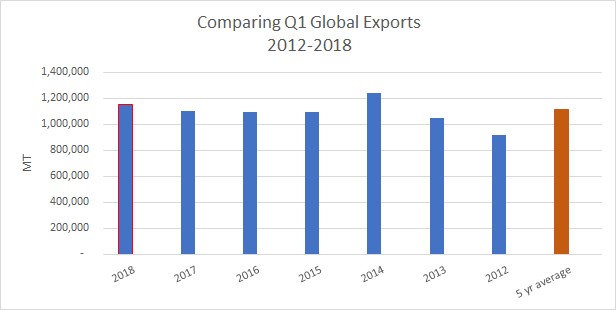 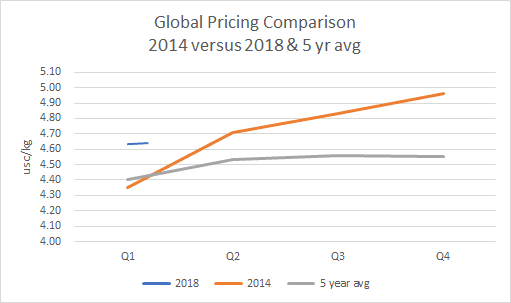 As stated the circumstances in 2014 was a result of a supply driven market. 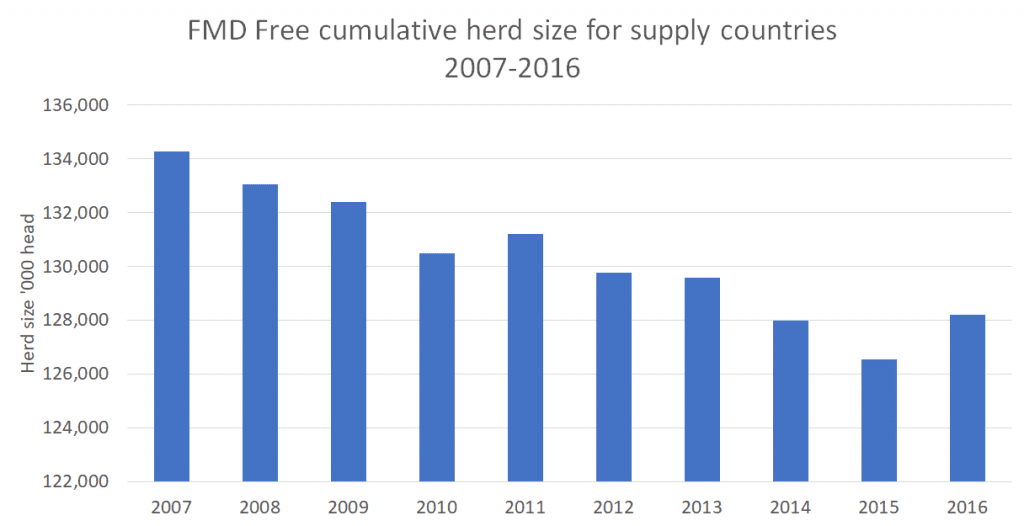 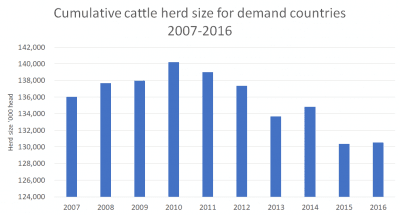 Today’s global market I believe is demand-driven, with the growth in the middle-class driving this trend, and in particular the Asian middle-class is the engine room.

Research work done by the Brookings Institute estimated that currently 140 million people enter the middle class each year and that within five years, this will be 170 million people annually. The research highlighted that 88pc of the next billion middle-class entrants will live in Asia, made up of the following; 380m Indians, 350m Chinese and 210m other Asians.

US export beef prices seem to be continuing to strengthen in February and March with all indications that April will be as strong if not stronger in pricing as buying for the Northern summer gets underway. 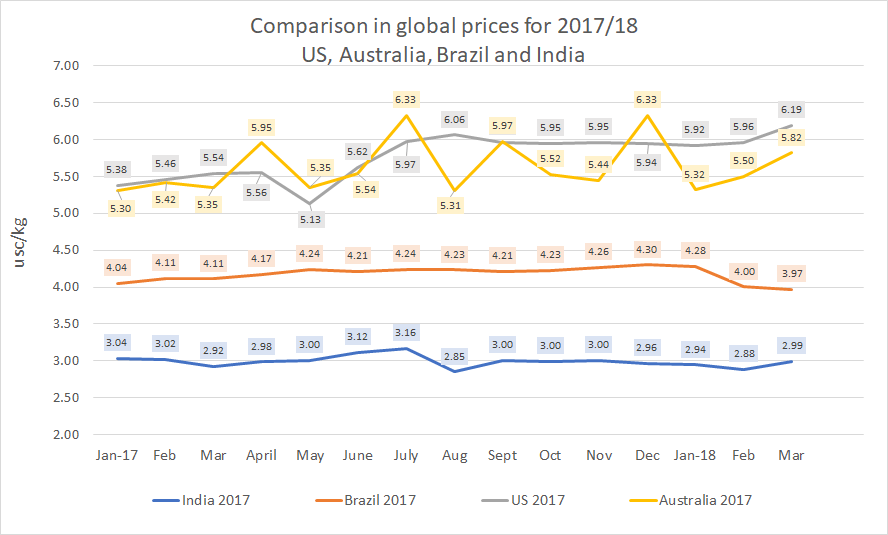