US 90CL price continues to lift, as NZ kill falls off a cliff

As the graph published here shows, it’s a normal seasonal occurrence for NZ at this time of year, and is one of the factors, along with currency movement and US demand, behind the recent price rise. 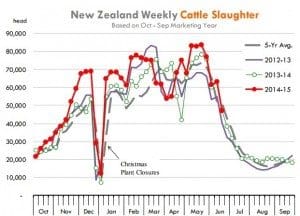 Last week’s 90 CL price to Australian exporters reached 674c/kg, representing a 10 percent rise from the recent low-point (612c) back in May, and the best price seen since mid-April. It’s still a long way from the record prices above 740c/kg seen back in September last year, however. (refer Beef Central’s home-page “Industry dashboard” graphs).

Domestic US end-user demand appears to be in better shape than what it was earlier, and are willing to bid-up in order to secure supplies.

In part this was expected given the seasonal tendency for the spread between domestic and imported beef prices to start to narrow once NZ supplies started their seasonal decline, Steiner’s weekly report last week said.

Currently the spread between domestic US and imported beef remains quite large at around US58c/lb but that is expected to shrink in coming months.

Steiner’s report suggests there is also some concern being expressed about imported beef availability in the northern hemisphere autumn, as Australia starts to limit shipments due to quota constraints. More on the current quota position below.

Among the current imported beef market drivers into the US:

Weather conditions remain a critical factor for Australian beef availability and pricing. While there is some expectation that El Nino will lead to persistent dry conditions, it is uncertain how significant those drought conditions will be during the September quarter.

Quota to increasingly come into reckoning

US Quota allocation and availability will increasingly become a concern for Australian processors in the next three months, Steiner suggests.

As at July 9, Australia had used 68pc of its US country-specific beef quota or 285,992 tonnes, leaving 132,222t in exporter accounts for the remainder of the 2015 quota year. Quotas are not triggered until 85pc of the quota has been used.

“There are only about 20 weeks left to ship against the 2015 quota (through November 24) although this is not a precise date, as it depends on vessel sailing times and other factors,” Steiner said.

“Still, if we take this date as approximate, it would imply a weekly shipment rate of around 6800t compared to the 10,333t shipped last week. It seems that given the pace of shipments so far, the US quota may be filled earlier than some expect, which could lead to a notable reduction in Australian beef availability towards the end of the year.”

Currency also remains a significant driver in the imported market, Steiner suggests. The potential for a Greek exit from the Euro Zone as well as stock market troubles in China, remain bullish for the US dollar and thus demand for imported beef in the US market.

Imports of Australian beef to the US were sharply higher in 2014 and that trend has continued at least in the first six months of this year. According to data from USDA/AMS, US imports of fresh/frozen Australian beef through June 27 were 226,452t, 64pc higher than the same period a year ago. Imports from other countries are up sharply as well. Click on image for a larger view. Source: Steiner Consulting.

USDA has been steadily revising higher its beef import figure for this year, and it is likely to increase beef import estimates in its next WASDE report.

Beef imports from Australia would likely slowdown in the second half of the year for two reasons, Steiner suggested.

“First, there is the issue of quota availability. Australia currently enjoys a quota allocation of 418,214t for FY 2015. This quota has been expanded every year and will continue to get larger as provided in the US-Australia Free Trade Agreement,” it said.

Beef entering in-quota is assessed a 4.4c/kg duty while out of quota beef pays a 26.4pc ad valorem duty.

“There is no question that Australia will fill its quota this year – it is only a matter of when: November or December,” Steiner said.

Beef imports from other markets remain strong but they will be seasonally lower into the fall as Uruguay and New Zealand seasons come to an end.