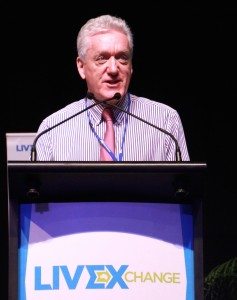 A few years ago Iain Mars was a leading figure in the Australian beef industry, as the CEO of JBS Australia and a board member of Meat & Livestock Australia.

In 2012 he moved across the Pacific to take up the role of Chief Operating Officer of Minerva Foods, Brazil’s second largest beef processer and exporter (JBS is the largest) and also the country’s largest live cattle exporter, shipping some 200,000 head of cattle a year.

Mr Mars began his extensive global meat industry career with the Vestey Group in London before taking his first foreign role at the Anglis Meatworks in Darwin in 1984.

He has since worked in senior meat industry management roles across 10 countries.

Mr Mars returned to the Top End yesterday where he provided an absorbing analysis of how Australia’s beef and live cattle industry is viewed by its global competitors, in an address to about 200 northern cattle producers, livestock exporters and other beef industry stakeholders at the LivexChange conference in Darwin.

The primary focus of his address was on the existing status of global beef markets and how competing exporters are positioned to capitalise on continued strong global demand for beef, particularly in Asia.

Australia’s heavily export reliant beef industry has been warned many times before that Brazil and its fellow South American beef producing powerhouses are poised to take over key markets.

Various factors have prevented that from happening the past, such as Brazil’s own large domestic market which consumes about 80pc of its own production, and Brazil’s own market access issues which have prevented it from exporting greater volumes of beef in the past (although its worth noting that Brazil is still the world’s largest beef exporter, with about two million tonnes exported in 2014, compared to 1.85 mt from India and 1.77m tonnes from Australia).

However Mr Mars told the conference that the country’s efforts to obtain freedom from Foot and Mouth Disease were progressing well, with all cattle are now being vaccinated against the disease.

Brazil currently has access to only 46 percent of global beef demand.

But this appears set to change with Brazil on track to gain access to many more key markets, which could soon open the country’s production to 80pc of global beef markets.

Brazil regained access to China earlier this year when eight plants were approved to supply the major market.

“She was in China last week and got another three plants approved, so Brazil will now have 11,” Mr Mars revealed. “We see that growing further and further.”

Mrs Abreu confirmed last week that the Saudi Arabia has also just opened its market to beef from Brazil.

Brazil is now also seemingly very close to gaining access for its fresh beef into the key US market.

Current market circumstances were delaying this process somewhat, Mr Mars said, adding candidly that Australia had “shoved so much meat in there” in recent times US cold stores were currently filled with Australian product which meant everybody else “had to suffer” for probably the next four to five months.

However the process of licensing Brazilian plants for US access was already well-advanced.

“Last week we had USDA around looking our factories looking to approve them, and they are pushing quite hard.

“People tell us the US will not open (our plants), but at the same time we have got the USDA going around approving plants ready for opening.

‘Two of our plants were visited last week and were approved’

“Two of our plants were visited last week and were approved – approved in inverted commas, they are approved once the protocol is signed between the two governments.

“But that will be very strong for Brazil”.

Mr Mars said Brazil had a lot of lean cattle and would fill the gap created by the drop in the Australian kill. Brazil’s agriculture ministry has previously stated that the US market could potentially take at least 100,000 tonnes of Brazilian beef within five years. Australia’s hit its full quota limit of 418,214t to the US market this year.

Mr Mars said Brazil would be limited to a quota of 60,000t when it gains access to the US market. However, given Australia is unlikely to have the supply to meet its full quota next year, he predicted there “could be more for Brazil”.

It was also widely believed, Mr Mars said, that if the US grants access to Brazilian beef, Japan will soon follow.

“That would give Brazil access to 72pc of global beef demand,” Mr Mars said.

If Brazil also gained access to South Korea, Canada and Mexico, it would then have access to 84pc of global beef demand.

Brazil’s beef exports to the Asian region have grown from just 6pc of its total export volumes in 2007 to 23pc in the past year. In November this figure has risen to a whopping 40pc.

“It is a huge, huge move, these are very significant changes, especially when we see what is going to happen with supply out of Australia,” Mr Mars said.

The headline numbers tell the story of Brazil’s motivations to grow its export markets to find a home for its already large and rapidly growing beef production.

As reported by Beef Central earlier this week, Brazil’s herd is expected to grow by almost 12 million cattle ( approximately half the size of the entire Australian beef herd) in the next two years alone.

A dedicated push by Brazilian cattle producers to produce more kilograms of beef per hectare rather than simply trying to chase prices was also driving signficiant increases in Brazilian beef production.

Changing on-farm production systems, such as the introduction of “semi-lot feeding”, or providing access to grain feeders for cattle on pasture, had helped to push average carcase weights in Brazil up by 7kg in the past year.

This was part of a a very positive change that was occurring in the Brazilian livestock industry, Mr Mars said. Producers were profitable, which was reflected in the rapidly growing numbers, the growth in productivity and capital investment occurring in the industry.

And Brazil is far from reaching its full production potential, Mr Mars said.

Some 187 million hectares of land in Brazil remain unutilised – not rainforest but undeveloped and potentially productive agricultural land, while birth rates and slaughter rates still had significant room to improve.

Mr Mars said Brazil and its South American neighbours such as Argentina, Uruguay, Paraguay and Colombia were all expanding their herds. This chart captures the growing trend of herds in each country of South America: At the same time, all other major export herds in the word were at historical low points in their production cycles: Australia had liquidated its herd in recent years and would have significantly less beef to export in coming years, while the US was becoming a net importer because of its reduction in numbers.

“In the third quarter of 2015, the cattle price in US dollar terms went down 16pc compared to the average price in the second quarter, but conversely, the export beef price increased 8pc.

“So there was a 24pc change in margin of spread, and we see that continuing.”

Minerva pioneered live cattle shipping from Brazil when it exported the first consignment of slaughter weight steers from the State of Para to Lebanon in 2003.

Mr Mars said the Brazilian industry had no where near the sophistication of Australia’s industry, but it was something it was aiming to achieve.

Brazil typically ships around 600,000 cattle a year (Australia by comparison has shipped about twice that volume in recent years) but its exports have dropped dramatically to just 185,000 this year, largely because of economic problems in its major market of Venezuela.

Minerva itself ships about 200,000 cattle per year on average, shipping slaughter weight cattle at around the 500kg mark.

Mr Mars said slaughter weight cattle in Brazil were currently priced at R$147 or AUD $3.58/kg (carcase weight) in Sao Paulo and $R 135 or $A 3.28 in Para, the state which provides most of Brazil’s live export cattle.

Shipping times were 5-6 days to Venezuela and around 20 days to the Middle East.

He said Brazil exported some feeder cattle last year and was always looking for opportunities throughout the rest of the world.

Minerva was one of two Brazilian beef processors which was also involved in shipping live cattle.

‘It is usual for a processor to do live cattle, but we see it as fundamental for the business,” he said.

“There are parts of Brazil where, like the northern part of Australia, it suits to do live cattle, and we’re fully supportive of the live cattle business and we play a very important part of it.”

With Indonesia currently contemplating opening its borders to beef and live cattle from Brazil, Mr Mars was asked about the reality of Brazil exporting cattle into South East Asia.

He said Brazil is working on a developing protocols to be able to supply slaughter weight cattle into markets such as Vietnam.

“With Indonesia, it is a market we always hear there is an opportunity to get into but there is no protocol.

“Is there a chance in the future? Yes there is. Indonesia want feeder cattle. It is a market that if there is demand we would always entertain that idea. But there are hurdles to get over.”

Mr Mars said he was surprised by the level of negativity within Australia’s cattle industry, saying the industry’s structures were the envy of the rest of the world.

“I remember when I was here with JBS and in 1984…all the associations got a lot of knocking, everybody would say there are too many bodies, too many quangos.

“It is fantastic, I tell the Brazilian guys about your controls, your carcase specification is standardised, your Ausmeat language is standardised, it is absolutely brilliant, don’t knock it.

“You’re mad to knock it, it is fantastic, the rest of the world want what you’ve got, it is something everyone else looks up to.”

“I have got no idea why they did that,” he said of the decision.

“We were (at JBS) investing money all the time, creating jobs.

“You want that money, you want those sort of people to be in your industry

“I don’t know why there is this xenophobia and why you don’t want foreign investment. People are bringing value and ideas, which is I think an opportunity.”

A highlight of Mr Mars’s address was two SWOT (Strengths, Weaknesses, Opportunities, Threats) analyses – one on the Australian beef industry from an outsider’s perspective, and another on the Brazilian beef industry, shown in the images below.