And it is clearly a market worth fighting for: Japan is the world’s third largest economy and home to 125 million people, which includes many more high income households than China (as outlined in MLA’s recent Japan market snapshot:) 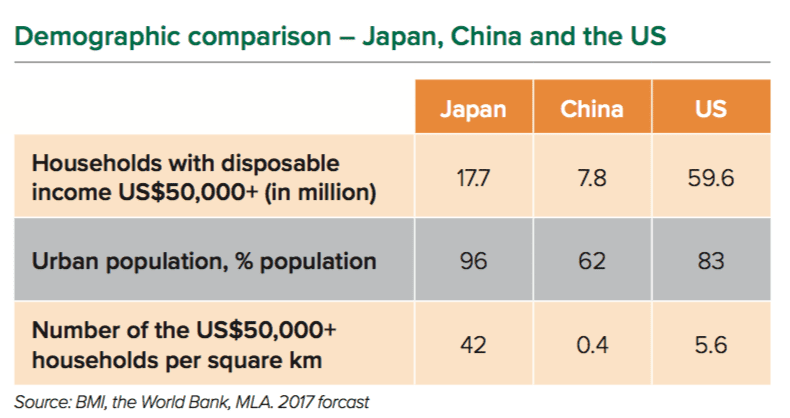 With a high quality but comparatively small and declining agricultural sector, Japan relies heavily on foreign-produced food, and is one of the world’s largest meat importers.

Mandatory country of origin labeling rules mean Japan is also a country where the battle for market share between rival suppliers is visible in every supermarket and refrigerated meat cabinet.

Retail beef packs must carry stickers denoting their country of origin, allowing consumers to make a direct choice between beef from Japan, Australia, the US or where available from smaller exporters to the country such as New Zealand and Canada (a list set to grow in 2018, as outlined below).

Japanese Wagyu beef is typically sold at about twice the price of Australian and US beef at retail. Lower priced pork also competes directly with Australian and US beef for consumers planning to cook traditional meat dishes at home such as Yakiniku (barbecued/grilled thin-sliced meat) or hot pots, noodles, rice meals or curries.

Japanese consumers are highly sensitive about the origins of their food and have a clear preference for Japanese produced food.

Japanese produced beef, which includes Wagyu and dairy beef, accounts for about 40 percent of all beef consumed in Japan.

However, the opportunities for imported beef are growing as the availability of local beef reduces, due to urban sprawl eating into agricultural land and Japan’s new strategic moves to export more of its own Wagyu beef to affluent export markets around the world (Japan beef is expected to gain access to Australia later this year).

Much of the 40 percent of Japanese beef consumption supplied by local product comprises high quality, highly marbled Wagyu beef which is purchased for specific dishes and for certain occasions, against which the majority of imported beef does not compete.

The remaining 60 percent is what Australia, the US and an increasing number of other suppliers are fighting for. 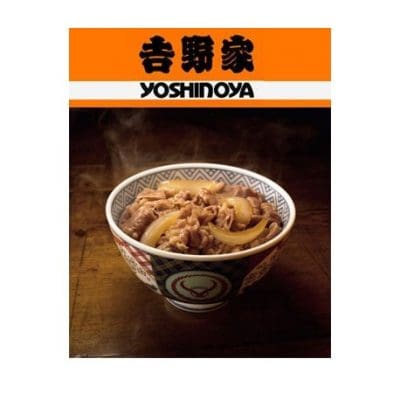 A beef bowl from the popular Japanese food chain Yoshinoya.

Two ways in which most beef in Japan is consumed are Gyudon beef bowls, a popular Japanese style of street food/fast food which comprises a bowl of rice topped with thin-sliced beef, onion and sauce, and in western style hamburgers which are also now massively popular in the country (Japan is now McDonald’s’ number two market globally, second only to the US).

Most beef in Gyudon beef bowls is sourced from the US, where processors can economically supply huge volumes of short plate brisket cuts preferred for that trade, while most beef for the hamburger market in Japan is supplied by Australia.

It is in the area of high value chilled primal cuts, such as loins and cube rolls for use in yakiniku or as western-style steaks, where Australia, the US and other exporters compete head to head for every square inch of retail meat cabinet space.

The United States was Japan’s largest supplier of imported beef until it was shut out of the market following a BSE detection in 2003.

It has been a long road back but the US has now regained virtually full access to the market with minimal restrictions and is on a clear mission to win back its number one title from Australia.

Australian beef currently has the advantage of preferential tariff arrangements due to a free trade agreement with Japan (JAEPA), which will further improve under the Trans Pacific Partnership signed in Chile last week.

Tariffs on Australian beef currently stand at 29.9pc for chilled 27.2pc for frozen. These fall to 9pc over the next 15 years under the TPP. The tariff on US beef entering Japan is 38.5pc. US frozen beef has been subjected to an even higher 50pc tariff since August last year after its exporters triggered a safeguard tariff, but this will revert back to 38.5pc in a few weeks time on April 1, 2018.

However, despite its tariff disadvantage, US beef still remains competitive on price in Japan due to its high levels of beef production and lower prices, versus the comparatively high price of Australian beef as a result of a drought-diminished herd.

The US beef export industry has seriously stepped up its beef marketing efforts in Japan and last year significantly narrowed the gap on Australian beef in volume and value terms.

The imported beef statistics also underline the fact that the overall imported beef market in Japan is performing very strongly and is growing.

An overview picture of just one of the 11 cavernous exhibition halls at Foodex in Tokyo last week – the Australian site can be seen to the left of the Malaysian site in this picture.

Last week’s Foodex Expo in Tokyo offered another example of how the battle for Japan’s coveted import beef market has recently intensified.

Foodex is Japan’s largest annual food exposition, and is massive in scale, comprising more than 3500 individual exhibitors from all corners of the world filling 11 adjacent cavernous halls.

While the event is perhaps targeted more at chefs and the high-level food service trade than some of the higher volume segments in which beef competes in Japan, the event highlighted how seriously actively many countries are taking the Japan import market. 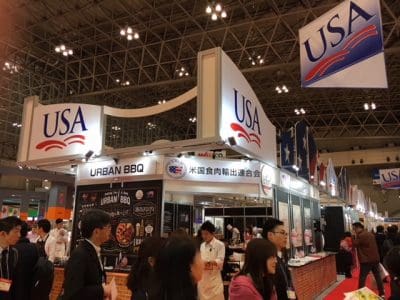 The USA site featured an urban BBQ and US beef steakhouse.

The USA had one of the largest country-specific presences at Foodex and US beef featured prominently at the stand, which included its own “US beef steakhouse”.

Beef and beef cooking demonstrations were also prominent features of the Canadian and Mexican sites.

South American counties still do not have access for beef to Japan but Uruguay is on track to gain entry to the market this year, after Japan indicated last December it will lift a 17-year embargo imposed following in outbreak of foot-and-mouth disease in Uruguay in 2000. 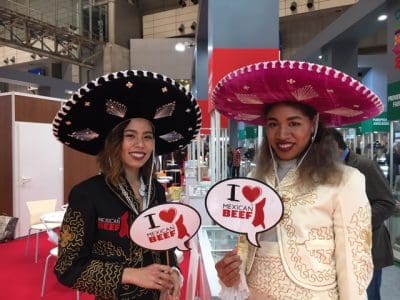 Major Japanese food producer and processor NH Foods a bought Uruguayan beef processing business in May last year for a reported A$180 million.

Uruguay’s comparatively small trade site at Foodex placed a strong emphasis on the 100 percent traceability of Uruguayan beef, and included a message of “100pc animal welfare” based on its natural grassfed attributes.

Like the US and Canada, British and Irish beef was shut out of Japan over a decade ago due to BSE issues but both are now also working actively to regain a larger sliced of the Japanese market.

Japan announced in January it will begin the process of lifting a 22-year-old ban on British beef imports in 2018. 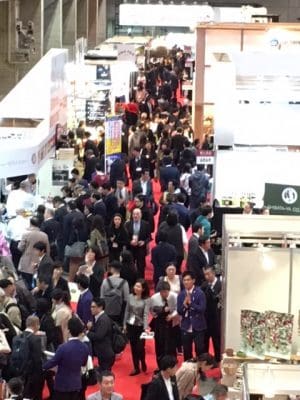 The deal, combining the 28-nation bloc and the world’s third largest economy, will effectively reduce EU and Irish beef tariffs to 9pc, similarly favourable terms to those enjoyed by Australia.

The Irish Government says it expects Irish beef exports to increase under the EU-Japan trade deal. 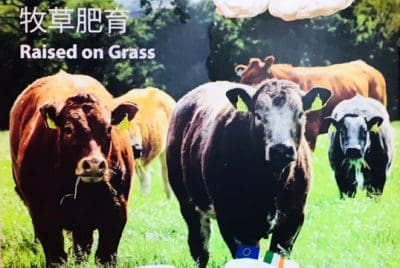 An image promoting the sustainability credentials of EU and Irish beef at Foodex.

The EU and Irish stand at Foodex also heavily emphasised beef from the region, promoting what it termed region’s ‘excellence in food safety and sustainability’.

Among the Australian exporters exhibiting at the Australian site at Foodex, which was coordinated largely by the Victorian Government, were a handful of companies promoting value-added Australian beef products into Japan such as pre-cooked frozen beef patties and meat pies.

Under the newly ratified TPP agreement, tariffs on Australian processed and value-added red meat products into Japan will drop from the current range of 6-50 percent to zero within 15 years.

Keep an eye out for more reports from Japan and Foodex on Beef Central in coming days.