New market research shows that few grocery buyers are strictly loyal to one supermarket, and most prefer to shop around rather than stick to one chain.

Of the four major supermarkets – Woolworths/Safeway, Coles, IGA and ALDI – IGA has the most loyal customers.

In any given four-week period, 30% of people who mainly shop at IGA only at IGA, the research found.

Grocery-buyers who mainly shop at Woolworths/Safeway are the second-most likely (25%) to stick with their number one, marginally ahead of Coles shoppers (24%). Despite its increasing overall market share, ALDI has a much lower proportion (7%) of exclusive shoppers. 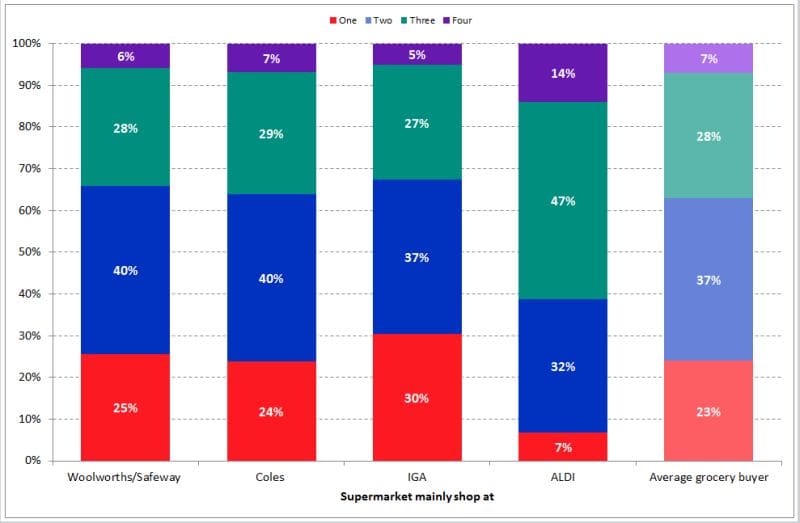 When asked how many major supermarkets they shopped at over the last four weeks, 37% of Aussie grocery-buyers reported shopping at two, 28% said three and 7% said they shopped at all four.

This pattern is relatively consistent among Woolworths/Safeway shoppers, Coles shoppers and IGA shoppers, for whom visiting two supermarkets is the most common scenario.

When it comes to ALDI, however, the greatest proportion (47%) of their shoppers visits three supermarkets in an average four-week period. Furthermore, people who say they mainly shop at ALDI are actually more likely to visit all four major supermarkets in that time than shop at ALDI alone.

“As our data has confirmed many times and in many different ways, Australia’s supermarket scene is incredibly competitive — and these latest findings throw another challenge into the mix. While most grocery-buyers have a supermarket they mainly shop at, a relatively low proportion of them shop exclusively at that supermarket. They do not seem to have any great sense of loyalty to their main chain.

“Meanwhile, the fact that so few ALDI customers shop exclusively at ALDI is not so surprising: while the German chain offers low prices and a popular home-brand range, it does not have such a huge variety of products as the other major supermarkets. As a result, it’s almost inevitable that ALDI shoppers will need to visit other chains during the month to complete their grocery shop.”