IN GROWING signs of the momentum in beef trade out of Brazil to China, a further 25 Brazilian meat processing plants have been approved this week by Chinese authorities for export.

All the new Brazilian processor listings are for frozen product, not chilled. The new regulations came into force on 9 September.

There is also some anticipation evident in Australia that China may expand the number of Australian export-eligible beef processing facilities in this country, to help fill the void left by the ASF disease outbreak.

Some of Brazil’s largest meat processors including Minerva, Marfrig and BRF are among the companies which have gained additional access to China this week.

Minerva has three new plants listed with total capacity of 3500 head per day, taking its total number of South American eligible plants for China to seven, with a daily total production capacity of just short of 10,000 head.

Marfrig has two extra beef processing plants on the list, both in Brazil’s Mato Grosso region, taking the company’s total to 11. 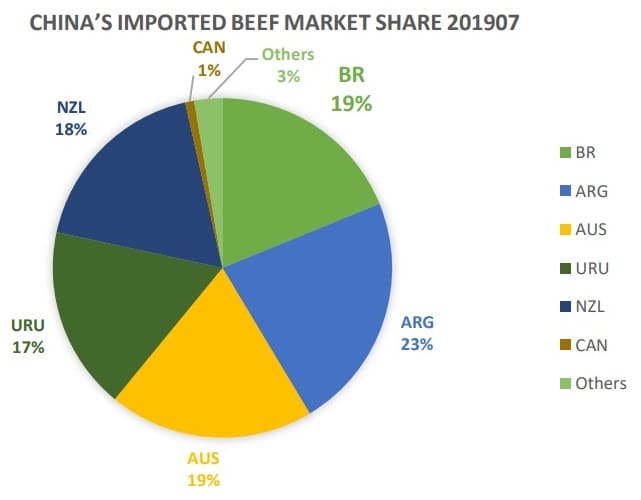 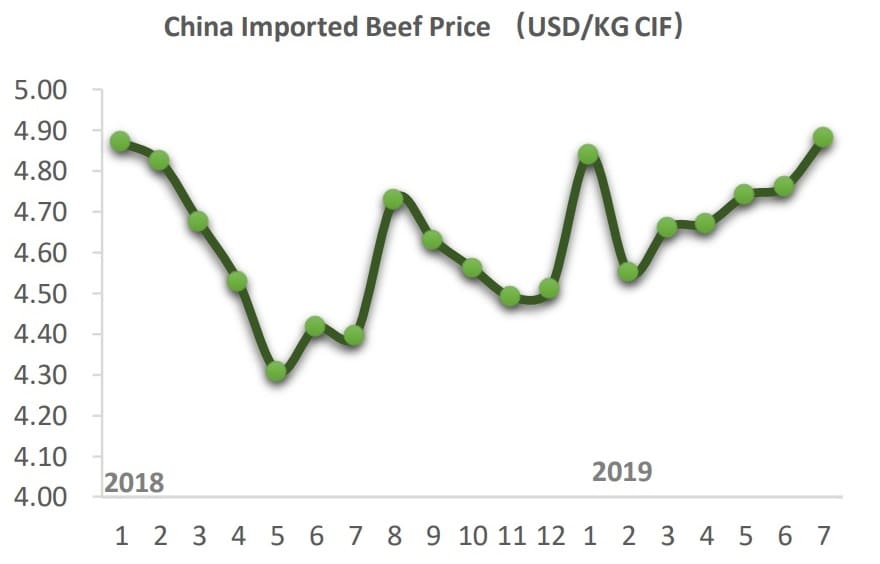 “With fierce competition among animal proteins and huge gaps in the market, Chinese importers are motivated to enlarge their purchasing volume and bet big on the peak season this year,” MIG’s report said.

Full year beef imports are anticipated to reach around 1.2 million tonnes this year – driven in part by additional access to Brazilian exporters announced in August and September.

As highlighted in this MLA graph below, Asia, and especially China, has become increasingly important to Brazil’s export footprint, increasing from a 12pc export share a decade ago to 45pc over the last twelve months. 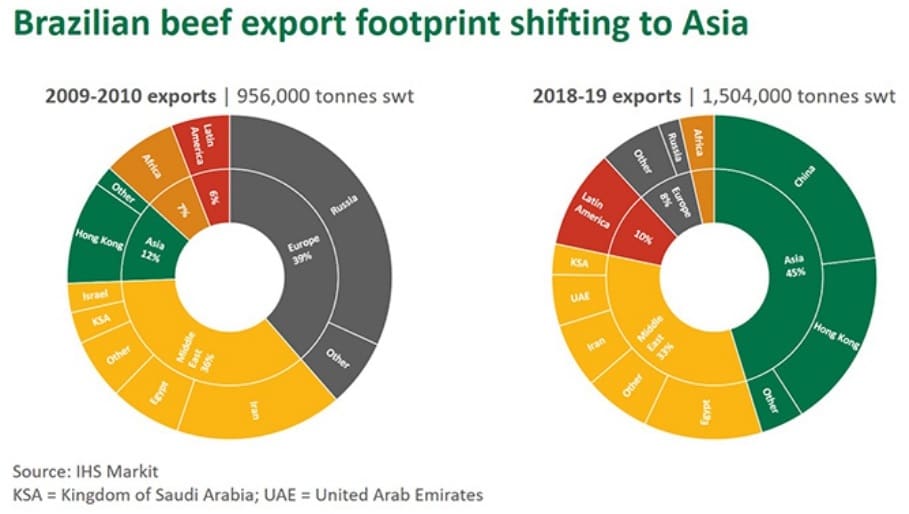 While China and Hong Kong have received the lion’s share of that export shift, other Asian markets have also increased in size. Most notably, exports to the Philippines have increased four-fold (predominantly frozen manufacturing beef) while shipments to Singapore and Malaysia have expanded 29pc and 78pc year-on-year, respectively, over the last twelve months.

While Brazilian beef still lacks access to Japan, Korea and the US (three of Australia’s four most valuable export markets representing 61pc of Australia’s export footprint over the 12 months to May) it is very price competitive in China and South East Asia.

Australian cattle prices are now at a significant premium to Brazil (50pc so far in 2019 on a currency adjusted basis), compounding the already high processing cost base in Australia (a recent AMPC study estimated it costs an extra 74pc to process a kilogram of beef in Australia compared to Brazil).

While Brazilian competition in Asia will likely increase, Australia alone cannot keep up with demand growth in China.

For Australian beef, this means it needs to continue focusing on attracting the dollars of the wealthy and discerning consumer who is happy to pay a premium for high quality and safe Australian beef,” MLA said in a recent market report.

* There are currently 47 Australian meat plants approved for frozen export to China, of which two are currently suspended, and one (Thomas Foods International Murray Bridge) closed due to fire damage. Of those 47, 11 are approved for chilled export.