China continues to approve more beef plants to ship beef to it, as its African Swine Fever-fuelled protein crisis deepens.

The latest approvals of 14 Irish plants and four UK plants are not directly related to the crisis, caused by the decimation of the Chinese hog herd due to African Swine Fever. But China desperately needs more beef, pork, lamb and poultry imports to offset an ongoing decline in its domestic pork production.

The 14 plants in Ireland join seven that had previously been approved following an initial granting of access in April 2018. The seven so far this year have exported 4650 tonnes of beef to China, four times more than was exported in 2018.

Four plants in Northern Ireland and England have been approved to export beef to China, with the first shipments expected to arrive there by the end of this year. This ends a 20-year ban on UK beef following its devastating discovery of BSE. The exports will be targeted at high-end restaurants and hotels.

China has also finalised a beef trade agreement with the UK worth £230 million over five years, after five years of negotiations.

China approved global beef approved supply plants now exceed pork approved plants by 18pc, which analyst Simon Quilty suggests points to China’s desire for beef to play a greater role in filling the void in protein caused by ASF. “This void is growing by the day due to the large ASF-induced inventory hog losses that now are estimated to be close to 50pc by year end,” Mr Quilty said in recent commentary.

Meanwhile there has been no change to the number of Australian beef or sheepmeat plants approved for frozen or chilled export to China since the African Swine Fever epidemic broke 14 months ago.  Currently Australia has 54 beef and sheepmeat plants listed for China, while New Zealand has 87. Australia has been waiting two and half years for an additional 16 meat plants to gain approval for China access.

This table produced by Simon Quilty shows the current plant listings across species and supplier countries effective June this year. It does not include the latest new listings from England and Ireland. 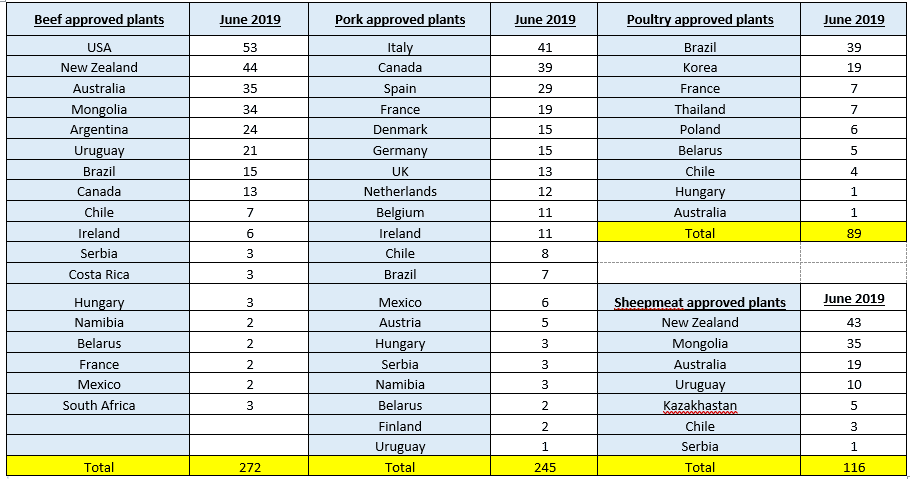