Brazil’s big surge into China beef market: What does it mean for Australia?

BRAZIL has made some big inroads into the imported beef market in China since first gaining access in May last year, muscling-in on Australia’s dominant supplier status driven by two things: price, and improving market access.

China has always been a price-sensitive export customer, but Australia has up to now enjoyed a considerable ‘front door’ market access advantage over export competitors, including Brazil.

Brazil first gained access to China in mid-2015, but its capacity to supply the market has now substantially increased, as more Brazilian plants and cold storage facilities gain approval for export.

According to a Chinese Government report seen by Beef Central, JBS’s Brazilian operations now have 46 percent of Brazil’s market share with seven plants, while Marfrig has a 20pc share with three. Six other plants share the remaining 30pc.

Brazil now has 65 plants approved for the Chinese market: 38 poultry, 16 beef and 11 pork. It is clear that Chinese authorities are looking to broaden and diversify their sourcing of animal protein and Brazil is the key target. Australia continues to have difficulty in expanding its current list of accredited facilities for China.

The Chinese government report forecast that Brazilian beef supply will grow this year to more than 20,000 tonnes per month, while Australia’s monthly share may shrink to an average of 10,000t or less.

Such has been the pace of change that within the space of nine months, China now represents one of Brazil’s single largest beef export destinations, along with Egypt, Hong Kong (proxy for China via grey channel) and Russia. Brazil went close to 20,000 tonnes worth of shipments to China in November – already 25 percent larger than Australia’s volume share for the same period.

Highly competitive pricing is the other big factor in Brazil’s recent explosion onto the Chinese beef market.

There are a number of reasons why Brazil is currently so price-competitive in the market:

Recent trade reports out of Brazil admit that demand and price in China currently is ‘depressed’, but it hasn’t stopped dramatic growth in trade volume this fiscal year

“No one doubts that China will continue to be the motor for export demand,” a Brazilian meat broker said last week. 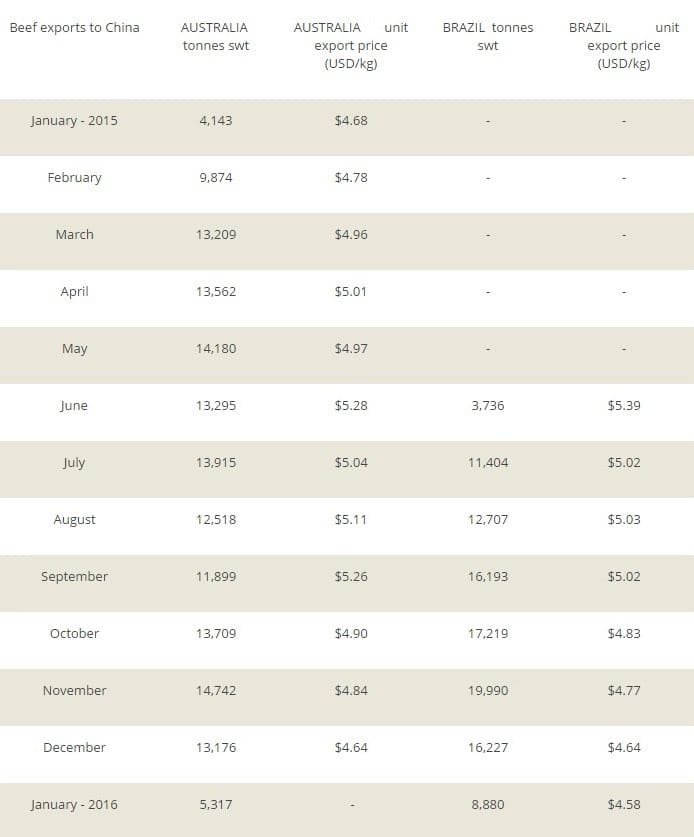 A senior Australian export beef processor attending the annual Gulf Food Show in Dubai this week told Beef Central that the landscape in the China market for imported beef was “rapidly changing.”

The processor, who asked not to be identified, said illegal grey channel trade excluded, Australia had dominated the official channel into China for the past two years, due to having a larger number of eligible plants and approved country access.

“But there’s no question that the tide has now turned,” he said.

“On a commodity-product basis, Australian exporters simply cannot compete with Brazil under current circumstances. It means Australia is really only selling into those higher-end, less price sensitive market segments, mostly in food service.”

“Cattle in Brazil are currently $2/kg liveweight cheaper than what they are in Australia. They have a currency that is equivalent to a US25c Australian dollar, and their processing costs are one third of what ours are.”

“Put that together, and it makes it impossible for Australian beef to compete, on the commodity-end of the trade,” he said.

Unless an Australian exporter was prepared to sell cow meat and lower quality steer meat to China at an ‘enormous loss’ it was likely that Australia would lose considerable market share to Brazil over time, he warned.

He said China was always going to be a very price-sensitive market, and in that segment it was always difficult to leverage a premium for “clean and green and traceable product.”

“It’s really only the top 20pc of the market that is prepared to, and can afford to recognise that in pricing. Everything else is price-driven,” he said.

So in a year like 2016, where overall Australian beef exports are forecast to fall 18pc (and even further next year) due to the drought-induced herd declines over the past two years, does it really matter if we concede ground to Brazil in the China market?

“Yes, and no,” was the exporter’s response.

“In the overall scheme of things for the next couple of years, perhaps not, because we will have so much less beef available to export. But on an individual product basis, it is likely to have a substantial impact,” he said.

“With access to Russia cut-off due to politically-driven trade bans, Indonesian trade tightly restricted, and the US cow-meat market in the doldrums, where do we go with cow meat and cheaper items?” the processor asked.

Russia at one point took +60,000t of cheaper commodity-type Australian beef each year, and Indonesia +50,000t. China has largely filled the void left by those two in the past two years.

“If China shifts more trade to Brazil, it definitely presents a problem in this country,” the processor said.

“It was fortunate that China emerged as a customer around the time that business to both Russia and Indonesia fell away, after boxed beef was banned. At the same time the US demand for Australian beef was in decline, as it liquidated its own cows due to drought. The Australian industry that year was very lucky: if China had not come along as it did, we could have been talking 90CL cow beef worth US220c/kg or less, because of how few other market options we had available.”

“It was just by the luck of the gods that China emerged as it did. We sent 150,000 tonnes of cow meat into China that year, as cuts or trim.”

The processor said the industry was not in a dissimilar position at the moment.

Grinding meat was still ‘very tough’ going in the US, as has been flagged regularly this year. Australia still has no access to Russia, where a lot of lower quality cow hindquarter beef used to go. Indonesia remains problematic, with some access for loin cuts, but none for secondary cow cuts. Knuckles, outside flats, chucks and blades, all used to go in quantity into Indonesia.

“So our options are now greatly narrowed. If China does more trade with Brazil, at Australia’s expense, it leaves us with a lot of cow meat to try to find a home for.”

“We could start to run out of markets very quickly, for that sort of meat. A lot of the time, those cheap cuts are now going into grinding meat – either that, or we start accepting trade into secondary-type export markets that are less competitive on price.”

“The risk is we don’t get full price discovery for those cuts, and that damages the value of the whole beef complex.”

The processor said the Federal Government had a strong role to play in delivering greater market access, as part of the solution to the problem.

“We have an agriculture minister regularly talking about farmgate returns. But processors can’t effectively play their part in delivering that without effective market access into these important markets – processors simply cannot get full price discovery on the value of each item in the carcase,” he said.

Trade access into China, for example, is currently restricted by limitation on eligible processing plants (only ten plants are eligible for chilled exports, for example), and a blanket ban on HGP-treated beef in response to certain Chinese requirements.

“In the overall scheme of things, I think Australia will be sending a lot less beef to the China market in future,” the processor said.