Brazillian beef is expected to start moving into Indonesia in coming weeks after the Indoneisan Government formally confirmed it has authorised 10 Brazilian plants to export beef to the country. 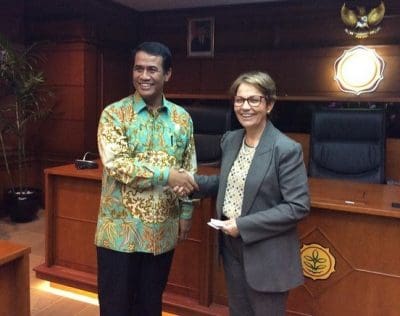 Brazil’s Minister for Agriculture, Livestock and Supply Tereza Cristina Dias announced the confirmation had been received from the Indoneisan Government last week.

The 10 plants will be authorised to export at least 25 thousand tonnes of beef.

As reported by Beef Central last month, the Indonesian Government has granted Brazil a new export quota to supply 50,000t of beef to Indonesia in the next 12 months.

“Today we have received the good news of this achievement,” Ms Dias said in a statement.

“Ten Brazilian refrigeration plants will be ready for this export.

In May, the minister met with Indonesian Agriculture Minister Amran Sulaiman to discuss the opening of the Brazilian meat market to the Asian country.

At the time she said Brazil was able to meet the demand for Indonesian animal protein, mainly beef, being an alternative and cheaper supplier to Australian meat.

“It is a country that has 270 million people. If you add Vietnam and Indonesia, we will have a market of nearly 300 million people who can consume various Brazilian agro products, ”she said.

Five of the 10 authorised plants are operated by Minerva SA.

Preliminary modelling by the Centre for International Economics (CIE) commissioned by MLA concluded that the entry of Brazilian beef would have a modest impact upon Australian cattle and beef shipments. Exports will continue to grow in the long term, as Indonesia increasingly requires imports to feed growing consumption needs.

Even with the entry of Brazil, compared to a 2018 baseline, Australian cattle and beef exports are forecast to increase 30pc and 87pc, respectively, over the coming decade, just 1pc and 9pc less than they would have been without added competition. In short, the increase in beef demand in Indonesia over the coming decade is expected to more than offset greater competitive pressure from Brazil.