EXPORTER Bindaree Beef Group has started selling its branded beef products online in China, underpinned by what the company claims is the first application of new technology designed to protect against counterfeiting and food substitution in the China marketplace. 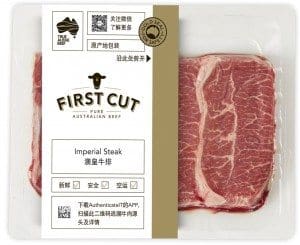 The new business follows an agreement struck in August between Bindaree and JD.com, which last year reported revenue of US$6.9 billion, almost twice the size of China’s eBay equivalent, Alibaba.

Michael Zhao is the head chef of Husk restaurant in Jing’An, and an avowed Australian beef enthusiast.

Four separate products are included in the range:

Sanger’s Tim Sullivan said with First Cut now available online, the company was gearing-up for the long-term, investing in local advertising, an Australian and Chinese website, microsite, brand videos and a WeChat account. 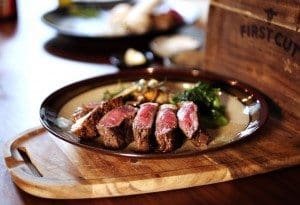 “We’re working with some of the best traditional and digital communications agencies in China,” he said. “We have a dedicated social media agency and First Cut team in place in China.”

He suggested the First Cut promotion would be a sustained campaign, rather than a ‘one off’ launch without any follow-up. “We’re here to stay,” he said.

‘First Cutography’ was also launched at the event using specially designed First Cut plates with an iPhone holder embedded in the plate.

“The plates are based on the idea that in 2015, we’re all food photographers. Whether its in our own kitchen, a restaurant or cafe, we’re all guilty of taking out our phones and snapping a picture of our food – often before the first bite. We are then simultaneously eating our meal and sharing the photo of it with our friends and followers via WeChat, Weebo, Instagram and other social media networks,” Mr Sullivan said.

In what is claimed to be a first for Australian beef, the First Cut brand is backed by the AuthenticateIT traceability platform, profiled earlier in this Beef Central article.

Using their iphone and a downloaded AuthenticateIT app, consumers can scan a QR code on the product pack (see image above), allowing them to trace the First Cut product back to Australia and its authentic sourcing and production. Unlike barcodes which can be easily copied and duplicated, the unique QR code on each pack makes it virtually impossible to compromise.

“Customers can have peace of mind from knowing that what they are buying is 100pc Australian beef and not a poor substitute that won’t have the health benefits and superior taste of First Cut beef,” the company says.

The First Cut brand program was developed with support from Meat & Livestock Australia’s Collaborative Marketing Program, which enabled Sanger to develop a brand and secure JD.com as a valued customer in China. Beef Central is hosting two specialised business and study tours to China in April and May next year, utilising our impeccable and deeply-entrenched contacts across the Australian and Chinese red meat supply chain. Just one of the many highlights will be a visit to the enormous SIAL trade show, pictured above, where Australian beef exporters have a strong trade presence.

Click here to learn more about the tours, and how to register your interest to receive more information.