TARIFFS on Australian beef exports to China will rise to 12 percent for the remainder of 2020, as surging beef exports again trigger the country’s Safeguard market protection provisions.

Under the terms of the China Australia Free Trade Agreement, a 4.8pc duty has applied to Australian exports since January 1, but large export volumes in the past six months have already reached the agreed country-specific 2020 Safeguard volume of 179,687t. 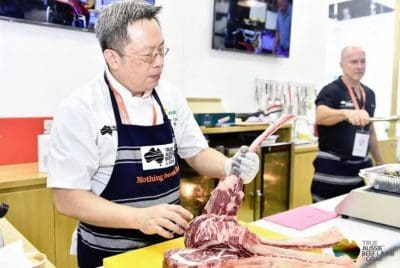 As of June 29, the number of import declarations for commodities under special safeguard measures (chilled/frozen beef cuts) has reached the trigger level for the current year.

As discussed in greater detail in today’s June beef exports report (click here to access) Australia’s exports to China slowed in June to 16,963t, down 25pc from this time last year, and down from about 24,000t shipped in both April and May.

For the first half of 2020, Australia’s exports to China totalled 121,181t, up just 3pc from a year ago, but a large ‘carryover’ quota volume from last year contributed to this week’s triggering of the safeguard.

It’s important to understand that the development has nothing to do with recent trade tensions between Australia and China, which led to suspensions of four beef plants from trade access in May, and the request for statements regarding COVID-19 safety from Australian exporters.

Instead, it is specifically a part of the CHAFTA trade agreement terms struck back in 2015-16.

Similar Safeguard mechanisms apply with other countries with which Australia has reached trade agreements, including the US, Japan and Korea. All three have triggered a number of times over the past 20 years.

Under its agreement with China, Australia’s annual Safeguard level gradually rises each year out to the end of the agreement in 2031. Next year, for example, the volume rises to 185,000t.

The annual trigger level is based on China’s own import figures, not Australian export figures. For product which is already on the water, on the basis of contracts settled before the Safeguard triggered, is exempt from the additional customs duty – but the volume is counted against next year, Beef Central was told.

While Safeguard agreements with some countries are discretionary in their application, China’s is an automatic increase for reversion to the 12pc rate. It is yet to confirm that that will occur this year, however.

The China Safeguard was also triggered in late August last year, but it occurred much later into the calendar trading year, meaning the added tariff burden was not as prolonged. The earlier triggering this year is partly due to the associated carryover volume from 2019.

Most of Australia’s export competitors in the China market, including Brazil and Argentina, do not operate under FTAs, and operate under the existing 12pc rate applied under the Most Favoured Nation (MFN) terms.

The obvious trade question is, does the adjustment impact volumes shipped out of Australia for the remainder of the 2020 year, and who, along the supply chain, bears the cost of the additional 7.2pc tariff on Australian beef?

Demand for beef remains historically strong in China as a result of the impact of African Swine Fever, which has decimated the country’s pork production over the past 18 months, one trade source pointed out. But whether the tariff change is likely to be reflected in prices offered for Australian product remained to be seen.

As with all of Australia’s Free Trade Agreements, reviews are held from time to time, and Australia may put the current circumstance – with trade rises way above anything the original document written half a decade ago could have foreseen – as a case for some revision, trade access contacts told Beef Central.

To the end of May, China’s total beef imports from all suppliers reached 831,256t, up 44pc year-over-year. Chinese import data show that Australian beef accounted for 17pc of the volume, well behind Brazil and Argentina as China’s third largest beef supplier.

Since early March, Chinese importers of US beef have been receiving tariff waivers for the 25pc retaliatory duty related to Section 301 (intellectual property and related issues). This has allowed the small quantities of US beef to enter China at the 12pc MFN rate, meaning US and Australian beef are subject to the same tariff rate in the Chinese market for the remainder of the year.