THE Pickersgills are humble people who don’t like media attention. However, patriarch Kevin agreed to be interviewed by Beef Central, recognising there has been interest in the family’s recent series of cattle property acquisitions across northern and central Australia.

For the past two and half years, the family has been making headlines after expanding its operations – paying around $125 million for 960,000 hectares of country in Central Queensland and the Northern Territory.

It also owns and operates two Northern Territory breeding properties spanning more than 900,000ha and running around 20,000 head of cattle.

Under the banner of the Bunderra Cattle Co, which means ‘among the hills’, the Pickersgills carefully select properties to breed and grow high-quality beef.

In Central Queensland, the family runs a substantial Droughtmaster cross cattle herd on the 9378ha Washpool near Humbolt, the 6014ha Shauna Hills near Bauhinia, the 11,772ha Maryvale near Alpha and the 3101ha Crescent, 4342ha Brooklee, 41,820ha Deepdale, 9043ha Mt Ogg and 13,840ha Mt Inglis near Rolleston.

Patriarch Kevin Pickersgill was born and bred on a dairy farm near Gympie, in Queensland’s Wide Bay-Burnett district. 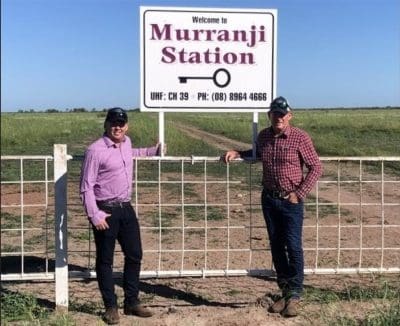 Kevin Pickersgill and son Duane at the entrance gate on Murranji Station, southwest of Daly Waters, bought in 2020.

In the late 1960s, when he was seven or eight years old, his father decided to throw his hat into the ring in the State Government’s brigalow land ballot scheme. He was lucky enough to draw a property called Redrock north of Comet in Central Queensland.

After a number of years, Mr Pickersgill senior sold Redrock to Johannes Bjelke-Petersen (later Sir Joh who went on to become Queensland’s longest-serving premier) and purchased the nearby property Washpool – the current headquarters of the Pickersgill’s family cattle operations.

When he left school in the 1970s, Kevin Pickersgill said there wasn’t much incentive to stay home.

The years 1974 to 1978, labelled ‘The Great Aussie Cattle Slump’ were without question the toughest that the Australian beef cattle industry has ever seen.

“It was a horrible time and it was difficult to see a future in the beef industry,” he said.

“Many friends did not return to the family farm. Since then, it has been a tough industry to be part of, with most ‘breaking even’ or ‘cutting it tight’ in terms of profit margins.”

“However, the last five or six years have been very exciting. Higher commodity prices have given young people the drive and incentive to have a go.”

Today, Kevin and Dianne (who have been married 38 years) head the Pickersgill family business Bunderra Cattle Co. with their sons Duane, Ashley and Liam and their families.

Mr Pickersgill said it was great to have the boys back home.

“When your kids leave school, you don’t know what they want to do or where they want to go. They are a great asset to the family business and I couldn’t be prouder of them.”

Mr Pickersgill said they are the reason the Bunderra Cattle Co is expanding.

“My sons have invested in the family business and like me, have plenty of confidence in the beef industry,” he said.

The Bunderra Cattle Co operation grows and finishes cattle on its 11 holdings in Central Queensland.

In March 2020, it expanded its operations into the Northern Territory after securing the 447,500ha well-improved breeding operation Murranji Station, south-west of Daly Waters and 370km south of Katherine, for $23 million including 12,500 cattle.

Then, in early August 2022, the family paid around $30 million for the 460,900ha turn-key beef breeding and farming opportunity Neutral Junction Station. Situated near Barrow Creek in the Davenport region, 300km north of Alice Springs and 150km south of Tennant Creek, the price tag came with 7000 head of Droughtmaster-cross, Ultrablack and Santa Gertrudis cattle.

Mr Pickersgill said the company expanded into the Northern Territory for a number of reasons.

“We were seeking breeding country, the NT offers ‘bang for your buck’ and it is a pristine part of the world. We are very excited about the growth and potential.”

Mr Pickersgill said the breeding operations are about five hours apart and will work well together.

“Boasting good cattle country, Murranji and Neutral Junction are situated in different rainfall regions. I am quite confident that if one property is struggling due to dry conditions, the other one will be safe.”

In terms of purchasing, Mr Pickersgill said the family has in the past conducted private discussions with landholders or has waited for the right opportunity to come to the market. He also noted it is important to be in a position to pounce on suitable properties when they arise.

Over the past 40 years, Central Queensland’s tightly held Southern Highland’s district has been a strong hunting ground for the Bunderra Cattle Co.

Mr Pickersgill said it is a great region to run cattle.

“It offers safe grazing in a highly reliable rainfall belt. While we are at the mercy of droughts like everyone, they don’t tend to last long. Most of that country, particularly along the Carnarvon Ranges, is a 810mm (32 inch) rainfall area, so if it is dry there, it is horribly dry everywhere else.”

So, is the family on the lookout for more country?

“At the moment, we have enough country and will now concentrate on upgrading the properties we have recently purchased. However, if a really good opportunity did come to the market, we would certainly consider it,” he said.

The Pickersgill family paid more than $40 million for the 35,448ha Aldinga Park, 50km south of Rolleston and 350km west of Rockhampton in Central Queensland’s renowned Southern Highlands. Included in the sale was a quality line of more than 2500 Droughtmaster and Brahman females, a mixed range of dry cattle and some plant and machinery.

Aldinga Park is parallel to the Carnarvon Ranges, 40km from Bandana Station which the Pickersgills purchased in October last year (see below).

The Pickersgills paid an undisclosed sum for the 12,552ha Peawaddy which Terry and Catherine Piggott carved off Aldinga Park before taking the rest of the property to market. Peawaddy neighbours the Pickersgill’s Mt Ogg Station.