THIS week’s property review includes this wrap-up of recently-completed sales, and a separate article on interesting recent listings across the country.

Greg Vickers and family, who own substantial grazing holdings in South Australia, have increased their Northern Territory grazing property footprint.

The Vickers have paid around $12 million (including 5500 head of mixed cattle) for the 2752sq km Pine Hill Station, 150km north of Alice Springs, bought from Filipino businessman Romeo Roxas. 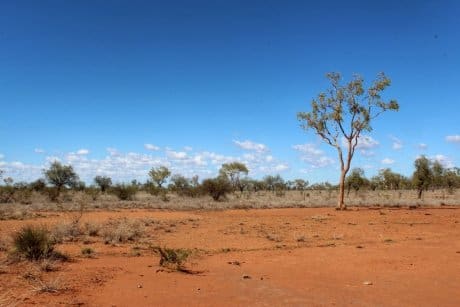 The Vickers have paid around $12 million (including 5500 head of mixed cattle) for the 2752sq km Pine Hill Station, north of Alice Springs

It’s the third Central Australian purchase by the Vickers family. Three years ago, they decided to look north for more cattle country due to the high price of land in South Australia. Their efforts resulted in the purchase of 83,300ha Delny and 38,200ha Delmore Downs.

Mr Roxas, who owns Australian Green Properties, is director of the Philippine Veterans Bank, president of the Green Square Properties Corp and the Green Circle Properties and Resources Inc. He has developed master-planned industrial, educational and resort cities in the Aurora and Quezon provinces on the eastern Philippines seaboard.

In November 2015, he made headlines when he paid more than $23 million (including 18,000 head of cattle) for two cattle stations north of Alice Springs – the 559,500ha Murray Downs, featuring the Davenport Ranges to the north and river and creek systems running through the centre of the property and the 265,600ha Epenarra, boasting 40km of Frew River frontage.

In October last year, he decided to offload the two NT breeding enterprises due to his age and overseas work commitments, while retaining Pine Hill Station, along with two sheep and cattle properties near Cobar in western New South Wales.

Murray Downs and Epenarra were offered with station plant and 17,000 branded cattle via an expressions of interest campaign.

However, a change in direction resulted in Pine Hill Station also being offered to the market. It created good interest and sold first.

In the meantime, the 265,800ha Epenarra has been placed under contract to a Droughtmaster breeder from Queensland for around $16 million.

The lower Barkly Downs region station is located 550km north of Alice Springs and is situated on the Frew River. 559,500ha Murray Downs, features the Davenport Ranges to the north and river and creek systems running through the centre of the property

It was sold on a walk-in walk out basis with extensive plant and store as well as 8000 Droughtmaster cattle, comprising 6000 breeders and followers, 2000 heifers and Droughtmaster bulls.

The third station, Murray Downs, has been withdrawn from sale with Mr Roxas keen to further develop the property and present it to the market in the next 12 to 24 months. “It would suit a range of agricultural pursuits including beef, prime lamb, wool and crop production,” he said. The aggregation is running 3000 Angus cows, 2200 weaner calves, 300 yearlings/bulls and 15,700 sheep.

A transaction of this scale is unprecedented on Kangaroo Island and Mr Russo admitted an asset of this size had never been tested in the market.

“Competition will be played out between large corporate players actively hunting beef production assets, smaller local operators, as well as mainland investors. We don’t know how the sale will ultimately play out, but already there are well qualified, significant players who have expressed interest in acquiring the whole portfolio, and there are others wanting to buy portions.”

The new owner, Growth Farms, is an Australian company specialising in the acquisition and management of agricultural investments. It was co-founded in 1998 by Angus Taylor, who is the current federal energy minister. Since then, Growth Farms has grown to manage more than $442m in assets for clients from Europe, Asia, North America and Australia. Grimwade & Gordon, who own one of Queensland’s most prominent grazing properties, have purchased the multi-purpose irrigation and grazing Cunnamulla property Melrose – dissolving a 45-year partnership by the local Dunsdon family.

Nick Dunsdon from Ruralco Property GDL Real Estate said Melrose was like no other farm west of St George.

“The Cunnamulla Weir on the Warrego River is more reliable than the Gwydir and the Border Rivers offering flexibility and unrivalled diversity in south-west Queensland,” he said.

“It is primarily used to produce fodder, finish lambs and background weaner cattle, with a portion of country organically certified. However, in the past, Melrose has grown numerous broadacre crops, as well as table grapes, rock melons and onions.”

Despite last year’s raging drought, the property turned off more than 3000 bales of hay.

While the property was sold bare of cattle due to the current seasonal conditions, Mr Dunsdon said grazing compliments the farming side of Melrose.

He said the price paid was within expectations and the property would complement Grimwade and Gordon’s 105,000ha Noorama Station, an aggregation of five properties located 110km south east of Cunnamulla and 260km north east of Bourke.

Moorabie Station, a 73,550ha cattle and sheep station in New South Wales’ far west, has been purchased by a neighbour for an undisclosed sum.

The remote property runs along the eastern side of the South Australian / New South Wales dog fence, 230km north of Broken Hill and 572km north east of Adelaide.

The undulating sandhill country has small areas of flood-out flats which are usually dry.

Owners Nick and Susan Pritchard, who have owned Moorabie since 2012, are downsizing and have purchased a smaller property in a higher rainfall zone in NSW’s Riverina.

The sale was handled by Broken Hill-based Ben Finch of Elders.

Mr Finch said over the past five years, the price of district properties has doubled to around $30/acre due to the strength of agriculture and commodity pricing.

Moorabie sits on a Western Lands pastoral lease and is awaiting ministerial consent before settling. The operators of Goulburn Farm Machinery have paid $4.65m for Raeburn, a property that once formed part of the massive Chisolm estate which spanned more than 16,000ha in the Goulburn district.

The operators of Goulburn Farm Machinery have paid $4.65m for Raeburn, a property that once formed part of the massive Chisolm estate which spanned more than 16,000ha in the Goulburn district.

Raeburn is located within the Breadalbane Plain, a two hour drive from Sydney, and has been owned since the 1980s by Robert and Loris Kilby who are now retiring.

The new owners, Mark and Michelle Coggin also own country in Grabben Gullen, near Crookwell.

Col Medway, who heads CBRE’s rural transaction business in NSW and the ACT, said the $6837/ha sale price was in line with other district sales. Ben Li from Sydney has purchased Pleasant View, on the NSW south west slopes, as a finishing platform to compliment his lamb breeding operation at nearby Bookham.

Meantime, Ben Li from Sydney has purchased Pleasant View, on the NSW south west slopes, as a finishing platform to compliment his lamb breeding operation at nearby Bookham.

Described as a lamb powerhouse by CBRE, Pleasant View is a 314ha property at Eurongilly, midway between Nangus and Junee.

Mr Medway said Mr Li paid $2.05m for 267ha that contained all of the improvements, while the balance of bare land was sold to a neighbour.

Water is secured by two bores supplying a reticulated water system and supported by 18 dams.