Perth business tycoon Kerry Stokes’ private holding company has bought Napier Downs, regarded as one of, if not the best cattle property in the state’s Kimberley region. 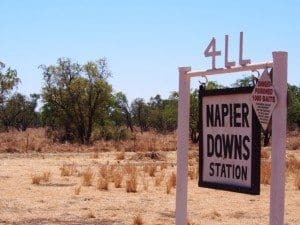 No price was disclosed, but Beef Central understands the deal was for a price between $23 million and $30 million.

Apparently Mr Stokes made an initial offer to Napier Downs vendor Peter Leutteneger of $23 million, after losing a battle with Gina Rinehart to secure Fossil Downs, which she bought in July for a reported $30 million (see earlier story).

Beef Central understands that Mr Stokes may have upped his offer to $30m to secure the Napier Downs deal.

An industry source with strong knowledge across the region suggested that if Fossil Downs sold for its reported $30m in July, it would be reasonable to attribute a value of closer to $40m for Napier Downs.

Comparisons between the Fossil Downs and Napier Downs sales will now be inevitable, however experts says the two results cannot be compared, for a number of reasons.

It is understood the Fossil Downs sale carried a considerable debt on the books – some say as much as $10m. Onlookers say Fossil Downs appeared to be over-staffed, and had struggled, long-term, to make a profit. In contrast, Mr Leutteneger has re-fenced Napier with laneways throughout the property and developed an excellent network of watering points, lifting productivity and efficiency.

Some regard the development work on Napier as being the best infrastructure model in the Kimberley region.

Mr Stokes joins Andrew Forrest and Gina Rinehart among WA’s billionaires who have recently made big investments in stations in the Pilbara, Gascoyne and Kimberley regions of the state’s north.

His Napier Downs purchase marks his return to the Kimberley cattle industry, after having once owned a string of stations in the region in partnership with business associate Peter Murray.

Napier Downs, more than 400,000ha east of Derby, boasts a 20,000 head Red Brahman cattle herd carrying the distinctive 4LL brand, rated by experienced cattlemen as perhaps one of the best in the Kimberley/Pilbara, if not northern Australia.

Mr Stokes told the West Australian newspaper that said the quality of the herd and Mr Leutenegger’s meticulous development of the station attracted his interest.

Mr Leutenegger has spent 35 years in the Kimberley, firstly as a helicopter pilot and then as a station owner. He told the West Australian he planned to have a break before taking on a new challenge.

Peter Murray, who is helping Mr Stokes with his agricultural investments through Australian Capital Equity, has long been an advocate of further development on the black soil plains of Napier Downs.

“I thought Napier Downs was the best station in the Kimberley 25 years ago and I still do,” he said. “I think it has a lot of blue sky.”

Mr Murray said the cattle industry was in the best shape of his lifetime. “I can’t see any reason why the market should fail because for first time ever we have multiple people who want to buy our product,” he said. “We have been underdone in Australia for 20 years with our prices.”

Together with Mr Murray, he owns a network of southern Australian farms producing cattle and lambs. Mr Murray told the West Australian they had not ruled out adding more properties.