As one of Australia’s largest pastoral entities, the Macquarie Group-owned Paraway comprises 21 stations from western Victoria to the Queensland gulf, and has 160 employees.

An extension of the Macquarie Pastoral Fund’s eight-year term was completed last year, resulting in an open-ended investment fund with review dates but no end date. 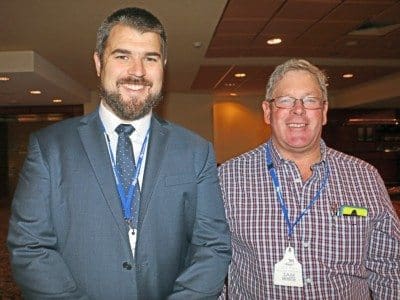 Paraway’s northern NSW region general manager  Stuart Johnston said the lack of a “drop dead date’’ had made an enormous difference to the business.

“We are not telling investors we are going to get them double digit returns – we are sub 10, and that includes capital growth.’’ Mr Johnston said.

“But we are looking to be a top 20 percent producer in Australia as far as farm operator returns go.’’

Mr Johnston was a key speaker at the Angus Australia national conference in Albury yesterday, May 20.

He said investor support was gained to reshape the portfolio with the aim of being a consistent and reliable livestock supplier.

“There is no longer any cliff-face – we are now 100 percent focused on what we are doing day-to-day at Paraway,’’ he said.

“It has been an interesting journey because we got in in 2007-2009 when northern beef property prices were high, so we felt the pain (of a declining property market), and had to always continually explain to the investors the longer term horizon.’’

Paraway parted with the million hectare Northern Territory station, Walhallow, in December to reduce exposure to the live export trade.

Mr Johnston said all end-product from Paraway’s Queensland properties would be channeled into boxed beef.

Expansion ‘on the cards’

He flagged further expansion into northern NSW and south-east Queensland was on the cards.

In April, the portfolio was expanded with the addition of the New England properties Aberbaldie, at Walcha, and the 2500 ha Burmah aggregation at Inverell.

Mr Johnstone said the Burmah aggregation would be expanded to 5500ha, finishing 5500 steers a year from an average weaning weight of 250kg to feedlot or kill weights, depending on seasonal conditions.

“There is a bit more country in northern NSW and south east Queensland we would like to get our hands on to make sure we have a few more depots for our calves as they come on,’’ Mr Johnston said.

The purchase earlier this month of Queensland stations Rocklands, near Mt Isa, and Tanbar, in the Channel country, fitted with Paraway’s  strategy to turn off more MSA graded livestock.

Mr Johnstone said the 678,000 ha Rocklands, boasting 20,000 breeders and a highway location below the tick line, had the ability to turn off crossbred progeny at a young age into the MSA grid.

He said the business had focused on long-term supply chain partnerships to increase sustainability.

“We are thinking differently about our approach to customers and partnerships – we are attempting to understand where we can help each other into the future through collaboration.

“We are trying to understand the relationship with lotfeeders and processors, making sure we can set up structures where we can share in the wins and loses.

“We are not afraid to trial a few different scenarios where we have followed animals through the kill and custom feeding to see the feedback – we are all about continuous improvement.’’

“When people talk about getting scale and efficiencies across the business, that is what we grapple with when buying new and improved properties,’’ he said.

“Most people look for efficiencies in labour, and we are finding if there is too much pressure on labour resouces, there are slippages in revenue and attention to detail.

“Investing in infrastructure to make life easier is one thing, but make sure the business is focused on the finer details.’’

This included sheep and cattle yards, fences and laneways to increase efficiency and operator safety.

“On the productivity side, we were focused on turning these properties into self sufficient business, especially in northern NSW,’’ he said.

Fodder cropping was used to increase productivity, enabling 5500 steers to be turned off at an average of 442kg liveweight last year.

“If you look at returns from 2007 to 2015, sheep have been consistent, cropping up and down, and beef and cattle only in the last 12 to 24 months have really started to come to the fore,’’ Mr Johnston said.

“For us, it is an exciting time to be part of agriculture.’’