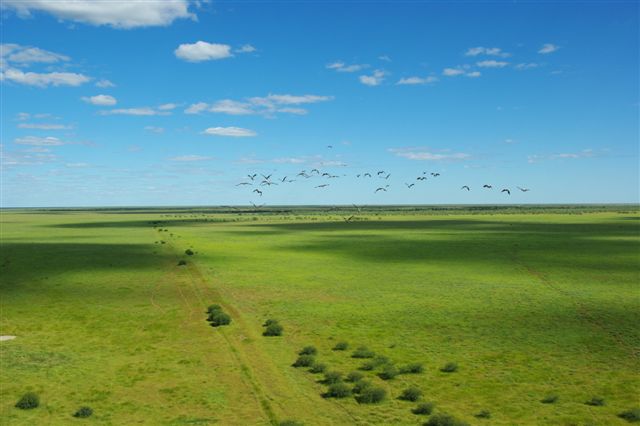 An aerial picture of Walhallow on the Barkly Tablelands. Picture: Paraway Pastoral Company.

What’s believed to have been an unsolicited offer has been made by retail magnate Brett Blundy to buy Northern Territory cattle stations Walhallow and Cresswell Downs from the Macquarie-owned Paraway Pastoral Co.

Beef Central understands contracts have been exchanged, suggesting the sale is now all but assured.

Singapore-based Mr Blundy is one of Australia’s richest individuals, with an investment portfolio that includes the successful retail chains Bras N Things, Dusk and Adairs and extensive commercial property interests.

Since 2010, the Brett Blundy Retail Capital (BBRC) Beef Division has acquired 1.4 million hectares of Northern Territory pastoral land through its acquisition with its affiliates of Beetaloo, Mungabroom, OT Downs and Amungee Mungee. The company now boasts a herd of about 85,000 head (as reported in July last year) and has been investing heavily in establishing new water infrastructure to increase the productivity of its NT cattle properties. (See more on BBRC’s investments in Beetaloo and Amungee Amungee here).

Spokespeople within Paraway Pastoral Co confirmed to Beef Central over the weekend that the company received an offer from Mr Blundy’s company for the purchase of Paraway’s breeding stations Walhallow and Creswell (the two properties are referred to singularly as Walhallow), which span 999,700 hectares of the Barkly Tablelands, due north of Brunette Downs and Anthony Lagoon.

Beef Central was yet to hear back from Mr Blundy’s company at the time of publishing this article.

Walhallow was once the headquarters of Peter Sherwin’s Sherwin Pastoral Co and later sold to the Hughes and Scott families’ Georgina Pastoral Co.

It was part of a three-property deal purchased by Paraway in 2009 worth $169 million, which also included Davenport Downs (1.5m ha) in Queensland’s south west channel country and Amraynald (219,000ha) in the Qld Gulf, and a total of 88,000 mixed cattle. It is believed Walhallow was carrying 46,000 branded cattle at the time, and is understood to be carrying a similar number today.

Paraway has invested in improvements to infrastructure and water since it has owned the property.

The value of the deal between Mr Blundy and Paraway has not been disclosed at this point. Recent property sales that may serve as a guide to current values have been  few and far between. The recent joint venture between Australian Country Choice and Acton Land and Cattle Company to form Australian Cattle & Beef Holdings included the 9200sq km Barkly Downs, a blue-ribbon cattle breeding operations in the Barkly tableland region. But no direct value has been publicly apportioned to the Barkly Downs operation under that joint venture deal.

Interestingly the most recent significant transfers of ownership to occur on the Barkly Tableland prior to that included the $169m deal involving Walhallow itself when it sold to Paraway in 2009, and sale at the same time of Rockhampton Downs from AA Co to the Harris family for $37 million.

Those sales occured back in what is now regarded as the most recent peak six years ago. The price paid for Walhallow in this latest sale will be of significant interest to the entire region because it will provide the most recent guide to Barkly values.

The sale means Paraway has now exited the Northern Territory pastoral scene – for the timebeing at least – with its most northerly holdings in Queensland including Armraynald, near Burketown; Davenport Downs in the Channel Country; Malvern Hills near Blackall; Clonagh, outside Cloncurry; and Gregory Downs, north of Cloncurry.

A brief statement issued by Paraway this morning said:

“Paraway continues to be deeply active in northern Australia and will continue to operate more than 2.25 million hectares in the region.  Our business, with the support of investors, continues to grow and we are looking to redeploy capital in land and livestock acquisitions.”

“We are absolutely in the market looking for land and livestock acquisitions,” a spokesman told Beef Central.

Paraway’s original investors invested on an eight-year closed-ended fund structure, which expired in July, 2015.  The previous month, investors voted to extend the fund, moving to an open-ended structure with no sunset clause, going forward.