THE beef property market in Victoria’s Western Districts and southeastern South Australia is shaping up as an exciting place to watch over the next twelve months, according to latest predictions by Australia’s largest independent property valuation and advisory group.

Herron Todd White rural valuer, Angus Shaw, based in the company’s Horsham and Ballarat office, said over the past two to three years the market for grazing properties in the ‘Green Triangle’ had been relatively slow, but the situation was turning around with an increase in buyer inquiry and demand.

“There has been a spike of notable quality grazing properties put up for sale,” Mr Shaw said.

“A good example is the 6000 hectare Mount Fyans aggregation near Dundonnell, one of the largest and most outstanding holdings in the Western District,” he said.

“Recent transactions appear to be reflecting this, with slightly improved values for the A-grade assets or well-known ‘name’ properties. Smaller secondary assets continue to experience steady interest, but vendors have to remain realistic in their price expectations,” he said.

The two main interest groups were big family farmers looking to expand their current operations, and private investors from the city wanting to purchase larger holdings.

Sam Triggs is the rural property sales manager at Inglis Rural Property, which specialises in New South Wales and Victoria.

He said after a two-to-three year lull, there was a reignited interest in grazing properties in the region.

“It’s coming from those operating on small to medium-sized farms and it’s linked to cheaper interest rates, stronger commodity prices and for some regions, a string of good seasons,” Mr Triggs said.

“While I haven’t seen a strong lift in values yet, there’s increased demand and a limited number of buying opportunities for large-scale mixed farming operations in the safer rainfall zones. I believe we are going to see a shift in values over the next three to six months by up to ten percent.”

Compared to this time last year, Mr Shaw said grazing property prices in his area had also risen between five and ten percent.

“The market for grazing country continues to display an improved outlook with continued strong beef prices and improving interest from private and institutional investors.”

Mr Triggs said the “fundamentals were there” for investment.

“The Australian dollar is low, credit is cheap and there’s a lot of money coming in from overseas. Australia is viewed as a good investment by offshore interests because it has a safe and stable economy. So while the currency is cheap, international buyers have great buying power.”

However, economies of scale are limiting foreign investment in Victoria, according to Mr Shaw.

While there is always interest in the beef property market, the parcels of land in Victoria are much smaller than further north.

“That’s why there’s more foreign investment in the other states where the tracts of land are much bigger,” he said.

Mr Triggs said international interest was extending beyond grazing properties to the beef supply chain – processing and value-adding – following the completion of the Free Trade Agreement with China.

“We are seeing increased interest from Asia looking for large-scale assets that can guarantee the supply of beef,” he said. 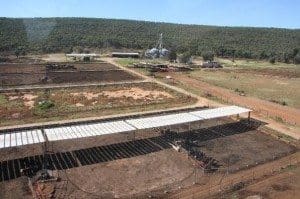 The Mount feedlot near Forbes

“Interestingly, many groups that are supplying Asia with live cattle are looking at assets in Southern Australia, because it is free from Bluetongue.”

Mr Triggs said there had also been a number of transactions for assets further along the beef supply chain.

Mr Triggs said currently, there were several groups looking at the Forbes Aggregation, an outstanding 10,000 hectare property in the Lachlan River region of Central NSW which boasts a 1000 head beef cattle feedlot, with capacity and license for expansion.

“Interested parties include Asians keen to underpin their beef supply into China. They are looking for large-scale assets, which is difficult to source in this area.”

In its latest Month in Review (November 2015), valuer Herron Todd White reports “the positive shift in the market sentiment, sales activity and macro-outlook (not just beef but most commodities), if sustained, should broadly support the general market values moving up.”