THE recent purchasers of North Queensland breeding property Esmeralda have secured a second large Queensland beef holding – this time at the opposite end of the state. 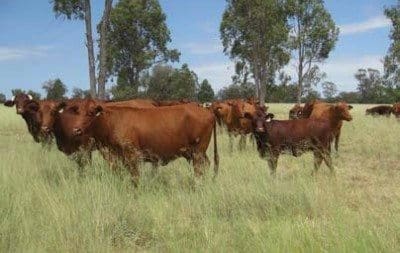 Shorthorn cows and calves on Goodar

Operated by the Munro family from Weebollabolla near Moree for the past century or more, Goodar is 18,400ha of freehold and leasehold country, well developed with 2500ha of cultivation on brigalow/belah self-cracking clays with additional arable land currently growing improved pasture.

No figure was disclosed, but reports suggest a purchase figure around $20 million. It was listed privately for sale last year.

On top of last month’s $40 million purchase of Esmeralda, near Croydon, and about $11 million spent on a 36,000ha aggregation near Roma, Gunn Agri Cattle Fund has now outlaid close to $100m on rural land assets over the past four months. The fund’s investors are described as overseas institutional-type investors.

Goodar provides valuable diversification in the Cunningham portfolio with large-scale capacity to grow fodder crops for growing-out, backgrounding or finishing grassfed cattle.  The property is well positioned to turn off cattle for both domestic and export markets.

GAC said the property was in the southern region of the portfolio’s target area which has historically experienced different climatic conditions from other Cunningham properties in the northern region.

The property has a carrying capacity of 6000 adult equivalents on improved pastures, and can grow fodder crops with the capacity to grow-out about 7000 weaner steers or heifers each year.

Gunn Agri Partners and Cunningham Cattle Co chairman Bill Gunn Jr said Goodar was a proven, highly productive asset that was a valuable addition to the Cunningham portfolio. No indication has been made that Goodar will be used to finish calves bred on Esmeralda.

He said the strategy of the Gunn Agri Cattle Fund was to acquire and operate cattle production assets in Australia and was targeting properties in Queensland with scope to include Northern NSW and the NT.

Gunn Agri Partners was in discussions with vendors of other properties within the target regions, he said.

The Fund, through its operating business Cunningham Cattle Company both owns and operates the properties employing management and station personnel directly and is currently recruiting for some roles.