Grimwade & Gordon’s latest acquisition is the Terrica aggregation, one of south east Queensland’s most historic pastoral holdings which is believed to have been secured for around $14 million

THREE years ago, BRW rich-lister Michael Gordon teamed up with well-known sheep breeders Will and George Grimwade, with the trio now forging an impressive portfolio of rural property investments.

The paths of the men crossed when the Grimwade brothers expressed an interest in purchasing Noorama Station, one of the mostly highly regarded grazing holdings in south-east Queensland and the last property in Mr Gordon’s Bydand Pastoral Company’s rural portfolio.

Since then, Grimwade and Gordon has been quietly building a rural portfolio running around 700,000 DSE on almost 200,000 hectares across six properties in New South Wales and Queensland.

George Grimwade said the partnership is both passionate and enthusiastic.

“We are seeking to build a balanced portfolio in terms of climatic diversity and spreading risk between sheep and goats. We haven’t pegged a particular growth target. We assess opportunities when they present themselves.”

Grimwade and Gordon’s latest acquisition is the Terrica Aggregation, one of south east Queensland’s most historic pastoral holdings which is believed to have been secured for around $14 million ($875/ha or $340/acre).

Comprising the 7005ha Terrica Station and the 8985ha Currajong, the 15,990 hectares are located 60km north west of Stanthorpe and 90km south west of Warwick.

Mr Gordon, who declined to disclose the price paid, said a number of factors were key to the sale.

“It made sense. A scale operation with that proximity (3hrs from Brisbane) is a rare opportunity. It also gives rain diversity to our production business.”

The Terrica Aggregation has been held since 2014 by LCP Terrica, owned by William Lempriere and Stirling McGregor who co-chair Lempriere Capital (a corporate advisory and private investment group).

Terrica Station was originally settled in the mid-1800s by the influential pastoralist and pioneering McLeod family whose pure-bred Merino stud became renowned for its superfine wool production.

During their ownership, the McLeods hosted numerous government officials and members of British Royal Family.

Ideally suited to grazing, sheep have continued to be the station’s main enterprise, with diversification into beef cattle in later years.

In 1982 Currajong was purchased by Rick and Louise Goodrich and in 2004 they acquired Terrica Station.

Continuing the legacy of fine wool production, the owners successfully maintained and developed the property to uphold the fine reputation as one of southern Queensland’s leading pastoral enterprises.

Key features of the Terrica Aggregation include a classic five-bedroom Federation style homestead circa 1907, 355 tonnes of grain storage and 109km of newly constructed exclusion fencing.

The sale of the Terrica Aggregation was handled by Nick Myer and Andrew Williams from Elders Real Estate.

The $875/ha sale price is understood to be strong for the area. Earlier this month, the nearby 4112ha Barongarook on Queensland’s Southern Downs, sold through James Croft at Ray White Pittsworth for $618/ha ($250/ac). The result is likely to trigger more local property sales.

It paid around $12m ($619/ha) for the cattle breeding and growing property which has an excellent reputation for breeding and backgrounding large numbers of cattle for feedlot and store markets.

The exclusion fencing also allows for sheep and goats, with the property rated to carry 2000 cows and followers, 4000 steers or 25,000 sheep in the current season. Cashmere west has an excellent reputation for breeding and backgrounding large numbers of cattle for feedlot and store markets.

Other Grimwade and Gordon properties

The 105,000ha Noorama is a highly regarded grazing holding in south-east Queensland. Comprising five holdings, it is situated in the heart of Cunnamulla’s ‘Salad Bowl’ region, 110km south-east of Cunnamulla and 260km north-east of Bourke in New South Wales.

With a carrying capacity of 80,000 DSE plus, it is renowned for its sheep and wool production along with cattle breeding, backgrounding, finishing and agistment. The property was bought in 2017. 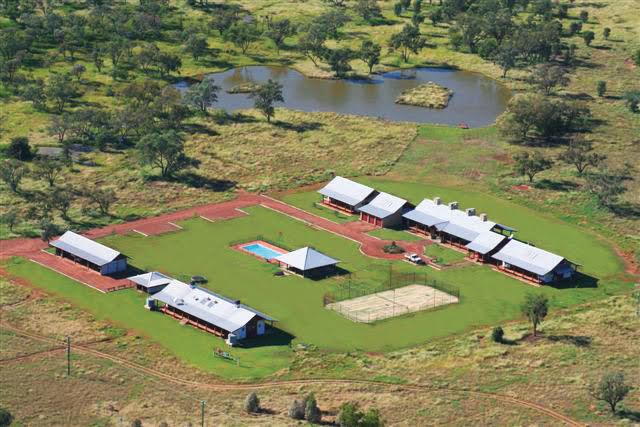 Showcase Cunnamulla districit property Noorooma, near the Qld/NSW board in the famed ‘salad bowl’ district, has a carrying capacity of 80,0000+ DSE

Comprising the 15,758ha Barrygowan, 15,786ha Mintaka and 8288ha Dunsandle, the fully exclusion fenced operation is located 140km from Bourke and 135km from Cunnamulla.

The property boasts 8000ha of flood out country from the Warrego and Noorama creeks.

In September, Grimwade and Gordon secured the Cunnamulla multi-purpose irrigation and grazing property Melrose to complement its Noorama operations.

It is primarily used to produce fodder, finish lambs and background weaner cattle, with a portion of country organically certified. However, in the past, Melrose has grown numerous broadacre crops, as well as table grapes, rock melons and onions.

George Grimwade, who has lived on Old Cobran since 2014, said the main enterprise on Old Cobran is breeding and trading sheep for export markets.