Movement at the Station: Properties for sale, passed in or withdrawn The safe calf breeding property Kutchera in Far North Queensland has been listed with a walk-in, walk-out sale price of $10 million.

Spanning 81,000ha in the Savannah Gulf region, Kutchera is located between the Ethridge and Gilbert Rivers, 95km west north west of Georgetown.

With an average annual rainfall of 800mm, Kutchera has abundant stock watering points, 30 dams ranging in size from 5000 to 15,000 cubic metres, 17 bores and five permanent lagoons.

Kutchera can carry up to 7000 head of mixed cattle. The WIWO sale includes more than 4000 cattle including 2500 breeders.

Jim and Jean Haynes have owned Kutchera for 18 years and are selling up as part of succession planning. They will retain Keswick at Julia Creek.

“Kutchera will appeal to anyone looking for grass. The property is currently understocked and there’s a good body of feed. It will also suit anyone looking for reliable, safe breeder country, or country to expand their current herd.” Located 40km north-west of Brewarrina and 100km from Bourke, Mundiwa and Twin Rivers feature an even balance of high-quality soil types

The pair purchased Mundiwa and Twin Rivers three years ago but have now decided to scale back their operations.

There is 323ha of cultivation, with scope to increase the arable area subject to approval.

They also boast a well-developed reticulated water system backed by 15 earth tanks, a 126 megalitre water entitlement and an 18 megalitre stock and domestic licence.

Col Medway from CBRE said the properties were located in a tightly held region of the western plains.

“The country is boasting a large body of feed leading into winter, after Easter rain and another 30mm of follow up. The rivers are also flowing and the dams are full,” he said.

Mundiwa and Twin Rivers would equally suit sheep or cattle breeders and are expected to make around $5.5m.

They will be auctioned as a whole on July 11 by CBRE Agribusiness and Schute Bell Badgery Lumby. Located at Talwood, 90 minutes west of Goondiwindi, Cheriton is a mixed farming, beef breeding or backgrounding and wool and/or lamb producing enterprise.

The grass may be browning off, but Mal Gollan who is marketing the 3997ha Goondiwindi property Cheriton said there’s still plenty of “flamin’ good feed.”

Located at Talwood, 90 minutes west of Goondiwindi, Cheriton is a mixed farming, beef breeding or backgrounding and wool and/or lamb producing enterprise.

Mr Gollan from Ray White Rural said there has been good interest from both sides of the border.

“There’s an excellent body of feed on the property. The exclusion fencing has rid the property of vermin, resulting in vigorous growth from natural and improved pastures.”

Fencing is a feature. Most of the boundary has new high exclusion fencing, with just 6km left to fully enclose the property. Internally, there is 17.5km of new sheep and cattle fencing.

Country comprises a mix of soft coolibah black to grey clays cleared for cultivation to soft red loams and clays for farming and pasture development to buffel and clovers.

It is well watered by a bore, troughs and dams.

The vendors estimate Cheriton can carry up to 5000 ewes plus 150 cows in average seasons, with some crop assistance.

After five years of ownership, Bill and Liz Holcombe are selling to consolidate and fulfil family succession plans.

Cheriton will be auctioned on June 21.

Genaren has been listed for sale by Richard Gemmell from Elders Central West for $10 million, after failing to sell at auction.

The cattle breeding and finishing enterprise located at Narromine/Peak Hill, spans 6425ha and was previously run as a Merino wool operation.

The property has a 6km, mostly double frontage to the semi-permanent Genaren Creek, plus several smaller creeks traverse the property. 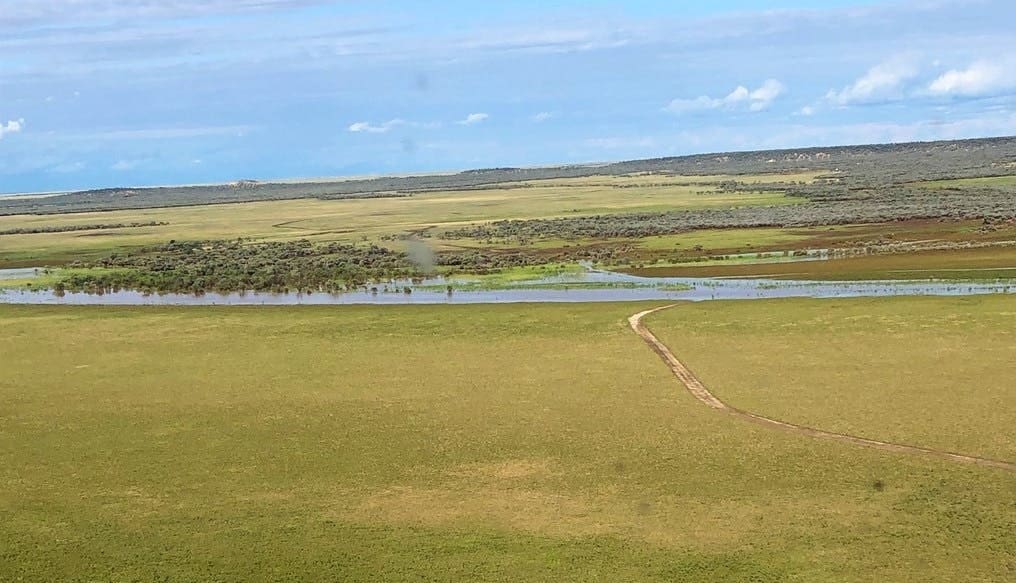 Tulmur, Tranby and Owens Creek, spanning 74,620 hectares, has experienced between 375mm and 560mm of rain, as well as beneficial flooding this year.

Tim Salter from Elders Longreach is negotiating with interested parties for Winton’s Tulmur, Tranby and Owens Creek, which were passed in at auction for $6.6 million.

Earlier this year, the 74,620ha breeding, backgrounding and fattening aggregation experienced between 375mm and 560mm of rain, as well as beneficial flooding.

Two of the three properties are neighbouring – the 54,300ha Tulmur (51km from Winton) featuring Diamantina River flood-out and channel country and the 14,100ha Tranby (80km from Winton) which features some beneficial creeks.

The lightly stocked 6220ha Owens Creek is 65km from Winton and has some paddocks available for early access.

Together, the three properties can carry 3000 breeders plus followers.

After single family ownership since 1918, Sandra McGavin and her brother Allan Walker are retiring and winding up their assets.

Marmboo was passed in at auction and offered privately for $8.5m, before being withdrawn.

The tightly held Western Queensland grazing operation Marmboo, which was being chased by grass hungry producers, has been withdrawn from the market.

The 38,558ha Vergemont district property, 92km west of Longreach, was passed in at auction after widespread rain.

During the four-week marketing campaign, Peter MacPherson from Ruralco Property reported that producers from across Queensland and as far south as Griffith in NSW could see an opportunity, especially with the provision of early access. However, that urgency left once the wet weather arrived.

Marmboo was subsequently listed for $8.5 million but has now been withdrawn from the market.

It is rated to carry 18,000 DSE or cattle equivalent and was being offered with 2023ha of stock route.

A strong feature of Marmboo is its water security which the owners had recently upgraded. There are bores, troughs and tanks, as well as 15 dams.