Raby’s historic homestead from the air

QATAR-owned Hassad Australia has entered into contracts for the sale of its showcase Warren district (NSW) grazing property Raby, plus the South Australian Glendale aggregation near Burra and Ungarra aggregation on the Eyre Peninsula.

Fifteen Australian family operators will be acquiring individual parcels of land from all three aggregations, which have been divided up.

While 8560ha Raby is famous for its Merino stud breeding heritage, more recently it has diversified into irrigated and dryland cropping.

In SA, the sales include two grain aggregations – the Ungarra parcel of Tapley and Garra, which jointly cover 7106ha on the Eyre Peninsula, and  the 3263ha Glendale aggregation in SA’s mid-north near Clare.

Hassad’s 2098ha Cummins aggregation on the Eyre Peninsula remains for sale, with Elders Real Estate expecting to finalise a deal before the end of 2017. 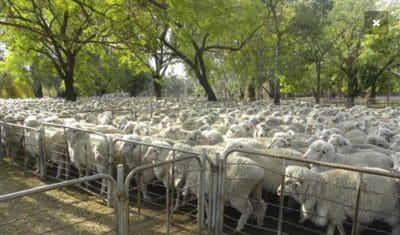 Merinos penned on Raby, near Warren

Hassad chief executive officer, John McKillop, said the divestment of the three properties, along with the earlier sales of Kaladbro in Victoria, bought by Tom Brinkworth, and Clover Downs near Cunnamulla in Queensland (sold for about $27 million), were in preparation for the next phase of the company’s investment strategy that will see further investment in lamb and grain marketing.

“The new Hassad Australia leadership wants to redirect the business away from pure primary production to a strategic blend of both farming and investments across the lamb and grain supply chains,” Mr McKillop said.

Hassad Australia was established in 2009 by Qatar’s sovereign wealth fund as Hassad Food Company’s first overseas investment. It is an integral part of Hassad Food Co’s broader vision to become a global food provider by growing, processing and supplying high quality food under a brand of excellence.

Mr McKillop said the decision to refocus investments would bring local operations further into line with the parent company’s goals.  With nine aggregations remaining across NSW, Victoria and Western Australia, Hassad Australia will remain a substantial player in the grain and sheep sector with approximately 65,000ha of cropping and 85,000 ewes to be joined in 2018.

“The sale of these properties in no way represents any sort of withdrawal or downscale of Hassad’s investment in, or commitment to, the Australian agricultural sector which, as we know, is one of the strongest and most sought after in the world,” Mr McKillop said.

“However for our business, the future lies in a balanced portfolio including farm operations, value-adding and the creation of a global export business capable of taking Australian food and fibre to the world.

“The sale of these properties will allow us to do that and to further diversify and strengthen our Australian operations, which is something we look forward to at this time of great opportunity for the production, processing and marketing of premium agricultural products,” he said.

The sale of Raby was handled by Phil Rourke and Trevor Wilson from Landmark Harcourts, Ungarra was handled by Tom Russo and Darryn Johnston from Elders, while Danny Thomas and Phil Schell from CBRE were responsible for the Glendale sale.