Can future property values be forecast on the basis of commodity prices?

THE continuing question of what return a rural property can demonstrate has been the source of endless discussions between valuers, investment managers and accountants involved in financial modelling of rural land assets.

The Australian Farm Institute has for its winter edition sought to investigate this question, and I was fortunate enough to be asked to contribute to the discussion.

For those interested in reading the five articles from industry and educational institutions, go to the website www.farminstitute.org.au

The process of writing this article was good, in that it really challenged me to look nationally for information and data to see where the value relationship to land and returns sits, based on settled sales over many years.

Buyer motivation, data access and credibility, and commodity and seasonal fluctuations are among the variables that influence a decision about how much someone will pay for an asset.

So while a complex calculation may be able to be built I asked our research guy, Rick, if he could simply overlay to Eastern Young Cattle Index (EYCI) and Queensland Cattle Market Index (QCMI) across the Qld Grazing Property index (QGPI) as reported annually by Herron Todd White and see what came up.

The result is presented below, and it reveals an interesting story. 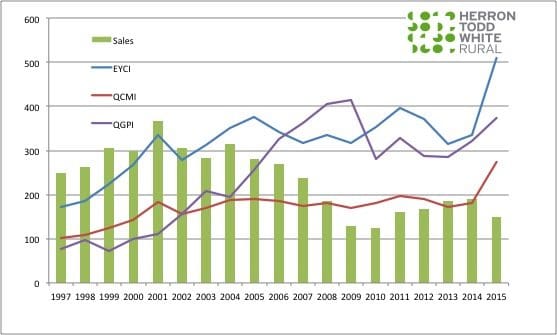 For the period 1997–2004, the result reflected that the land values moved inline with, but about six months behind, the underlying commodity movements with a high conviction.

From 2004-2009 however, the value of rural land growth to the peak of the market in 2009 was significant, with values increasing 62 percent on the median price in the five years, while the ECYI decreased 15.5pc and the QCMI decreased 10.6pc.

In other words, the driver of land value was not reflective of the commodity return. This disconnect was also highlighted in the QRAA Rural debt surveys in 2009 and 2011.

From 2009-2013, the connection between land value and commodity return come back into relative alignment, but largely because of the fall in land values, not the rise in commodity prices.

The years 2014 and 2015 then show the impact of the significant shift in the beef pricing and subsequent impact on land values. The rate of growth in the curve for the EYCI and QCMI is as sharp as any point in the last 20 years, which is no surprise for those in the industry. The jump in land values however is possibly more of a surprise.

So the question then moving forward for all stakeholders is, What is the sustainability of the commodity market pricing relative to current saleyard, processor grids and live export pricing?

There are potential risks out there (Indian frozen buffalo meat exports, Brazilian beef exports etc) that could place a cap on prices and possibly see a reduction in the commodity marketplace. If this were to occur, the logical view would be that the land values, if still following the lag period, would adjust accordingly – or at least flatten out.

I have recently presented to a few banks and corporate clients and commented that the rapid rise in land values in some sense has actually in my mind brought time forward. Where we thought the values may get to in say 2018 have been achieved in 2015/16.

The shift has been good for vendors and agents are reporting across the country that it is harder to find or list assets relative to the demand currently. Does the market settle a bit to draw breath or does demand see another level of value shift in land? Only time will tell.

Conclusion: Forecasting the land value movements based on the commodity price overlay which has a six-month lag maybe a good guide to looking at least into the short-term land market values.

This assumes the connection between the commodity outlook and the land values remains high.  Of course valuers are not there to forecast or predict the future – they deal with settled sales evidence and hopefully in a consistent manner of analysis so that our clients have a consistent reference for the conclusions drawn.