MSA program manager Sarah Strachan said the producers were to be congratulated for their commitment to produce beef that consistently achieves exceptional compliance rates to MSA’s strict specifications.

“To help with continuously improving eating quality, MSA-registered producers are provided with ongoing feedback on their livestock, accessible through myMSA, which now offers producers the ability to benchmark their performance against other producers in the state as well,” Ms Strachan said.

“These producers are showing they are taking notice of that information to achieve results.”

The Awards aim to raise awareness of best management practice from producers who consistently deliver high eating quality beef in their state ultimately for the benefit of consumers and for the profitability of the industry.

Wodonga’s Colin and Ross Coyle won their award from a field comprising 1329 registered producers in Victoria who consigned grassfed cattle during 2015-17.

Eighteen years after registering as MSA-accredited producers, the pair have narrowed down the two factors they think are key contributors to the eating quality of beef – temperament and handling.

“Getting cattle to grade into the top of the MSA Index bands is 90% about what you put down their throats and the rest is keeping them quiet through handling,” Ross said.

“Breeding isn’t everything for us. Certainly the better-bred cattle will get to the standard quicker but by supplying good quality feed and treatment you can get most breeds to grade well –some just take longer than others.”

An added challenge for Ross and his father Colin is that the steers they turn off annually on 2000 hectares of mixed country in north east Victoria are destined for Greenham’s Smithton processing plant, a ferry ride across Bass Strait to North West Tasmania.

“I think it’s testament to our operation that we can load the steers onto trucks at 8am or 9am, drive them down to the Port of Melbourne and onto the ferry and they’re at Smithton for the next morning’s kill, and they grade up there with the best of the MSA beef,” Ross said.

Ross and Colin registered their farm, Murray View, as an MSA supplier in 1999. Eighteen years later, Ross said the standards had become “more a matter of common sense.”

“Once you get involved in adhering to the MSA protocols on the farm you start to see the benefits in grading, and that has an impact on things like the number of dark cutters, where the beef shows signs of stress in the cattle,” he said.

“We get very few dark-cutters, we pride ourselves on that. Twelve months ago I went to Smithton to watch the MSA graders working and that helped me to understand the reasoning behind the standards.”

Ross and Colin buy in steers, mostly British breeds 8-12 months old, from the nearby Barnawartha North saleyards, one of the biggest in the state, and grow them out to +600kg.

Ross said he liked Angus but will also buy in Herefords, Shorthorn and black baldys from a range of breeders.

“I select more on type, but we recognise good cattle and if they’re at the saleyards next time we’ll go back and buy from the same vendor,” he said.

“We used to select mainly on size, animals with as big a frame as fitted our budget, but now I take temperament into account a lot more and I’ll certainly go past a pen if there are cattle in there that are stirred up and stressed.”

“I think the biggest factor in getting cattle to grade well is keeping them quiet, handling them and keeping the mobs separated with good nutrition.”

On arrival at Murray View the young cattle are drenched, ear-tagged and their individual number recorded, then put out into the family’s hill country which is kept lightly stocked and grows mainly native pastures such as clovers, ryes and red grass in an annual rainfall zone of 710mm.

“We might take a round bale of lucerne hay up to them to get them coming to us but otherwise there’s not too much contact, although there are public walking tracks through there so they get quite used to seeing people, which is good.”

Ross said the benefit of MSA is the exposure to “worthwhile information.”

“MSA provides practical guidelines to use in the preparation and marketing of our product, gives us an idea of how we’re performing against benchmarks, and we have the added ability to follow feedback to see where we’ve performed well and where we can improve,” he said. 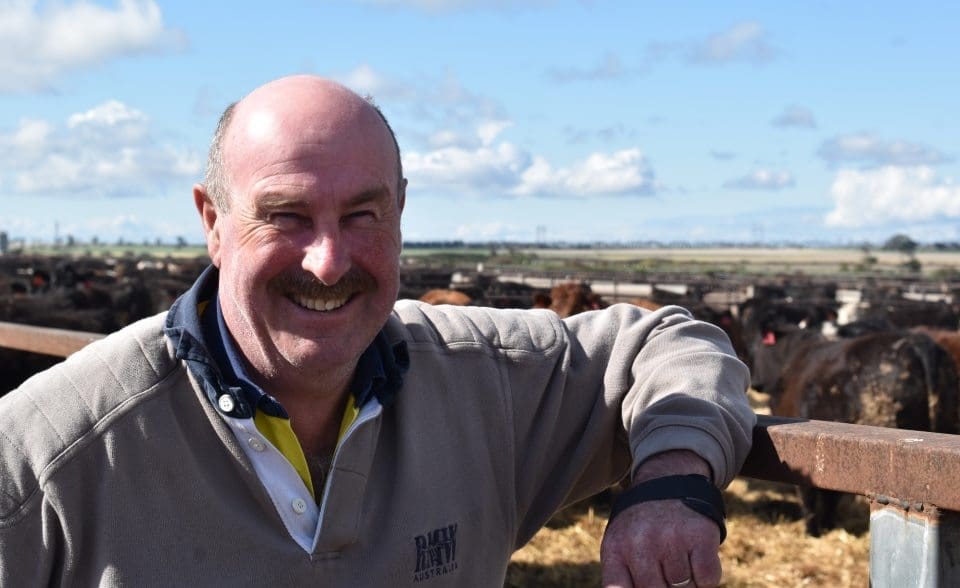 For Victorian lotfeeder David Gillett, the key to producing the best eating quality beef lies in the low-stress handling of cattle in his family’s 7000-head Jalna Feedlot* at Anakie, near Geelong.

David last night won the 2017 MSA Excellence in Eating Quality Most Outstanding Grainfed Beef Producer Award for Victoria. During 2015-17, 41pc of all cattle consigned to MSA from Victoria were grainfed.

Handling is just one of the factors David considers in the commitment to the MSA program, introduced to his business eight years ago when he was contracted to supply Coles supermarkets.

The Excellence in Eating Quality Awards for Grainfed producers recognises feedlots that have produced cattle eligible for Australian Grainfed Beef Standards and have high compliance rates to the MSA minimum requirements and consistently high eating quality performance – as determined by the MSA Index – for cattle consigned during 2015-16 and 2016-17 in each State and Territory.

David said while stress has a big influence on beef eating quality, it’s just one link in a whole circle of factors that contribute to the overall end product.

“MSA grading is also about acclimation, nutrition, transport, staff and facilities, and simple things like making sure that water troughs are clean and feed is sufficient,” he said.

Nevertheless this fifth generation farmer, whose feedlot* was registered in 1969 and whose son is the sixth generation Gillett to work in agriculture, acknowledges the benefits of changing the way they handled cattle on feed.

“Our MSA figures showed how stress in cattle had a direct correlation with meat colour and pH levels. If you’ve got cattle that want to run or spook easily, the pH levels go up very quickly, and that can make for tough beef,” David said.

“In the early days, pen riding at Jalna was done on foot or by motorbike but now we are 100pc on horseback, and the cattle quieten down very quickly with calm handling.

“It’s also a case of being aware of the impact of stress – for example, choosing the coolest time of the day to load out in summer, so that there is time to walk the cattle up to the yard slowly for their 45-minute trip to the works.”

The combination of introducing horses, re-designing feedlot facilities and continual education of staff has resulted in incremental gains that show up in the MSA data.

Jalna delivers 70-day trade cattle that are a combination of British breeds and crosses, and 100-day custom fed Angus steers for the Coles Finest brand.

David says the MSA performance results are also used to select and inform the regular suppliers of cattle to the feedlot. They come from an area covering Gippsland in the east, the Riverina region of southern NSW and along the Murray River, across to western Victoria and into South Australia.

“By integrating MSA data with the performance of cattle in the feedlot, we can feed information back to the producer that his cattle are making the weight gains and producing top quality meat,” he said.

“This is critical because if you don’t start with the right animal in feedlot, you won’t get the meat quality at the other end.”

David is a firm believer in building relationships with every company in the feedlot supply chain, and said it’s important that each link be able to make a profit and have confidence in the next.

“We have two or three companies that supply grain and supplements and we do some direct buying of grain off farmers, and we have a nutritionist, Dr John Doyle from Toowoomba who visits monthly to design rations, and a consulting vet from Southern Cross Vet Services at Cohuna,” David said.

“Both men do a lot of training with our staff – we have 14 staff between the farm and the feedlot – and we are continually upgrading our knowledge of animal welfare and pen riding techniques with Dr Kev Sullivan, an expert in low stress and acclimation.”

David attributes much of the feedlot’s success to his staff, two of whom have worked with the Gillett family for four generations.

The family also crop 4300ha of canola, wheat and barley, and bale the cereal straw for use as roughage in the feedlot. In a normal year they average 4500 to 5000 bales, but after an exceptional season last year they baled 14,000, which will be a fodder reserve for three to four years.

While the Gilletts aim to produce milling wheat and malting barley, they retain the option to use the grain in the feedlot, depending on price differential and transport costs.

After last year’s bumper grain harvest, they chose to value-add 9000 tonnes of barley through the feedlot for a $25-$30/tonne profit, David said.

The next innovation for the feedlot is the construction of a roof that will cover 1800 head of cattle, with the aim of reducing the effect of muddy winters that create dag issues in cattle, problematic during processing.

The roof was made possible by a $500,000 grant from the Coles Nurture Fund, and David said it will reduce the cost and stress of washing the cattle as well as improve weightgain.

“For the last 30 days of the feeding period, cattle will rotate through the roofed pens and be on a woodchip base, so in the clean, dry environment the dags and dirt will fall off,” he said. “We’re also expecting a jump in weightgain and a reduction in the feed requirement they’d usually require to keep warm.”

There are other benefits to flow from the roof – with a long term average winter rainfall of around 480mm, David anticipates harvesting 5 million litres of drinking water for use in the feedlot.

The roof construction should be completed by November and stocking levels will be adjusted while the pens are shut off and double feeding bunks installed.

David said MSA is a key factor in his feedlot’s success, and he advises other producers to “get on board.”

“What you get out of it will be different for individual operators, but there’s a lot of information and feedback data that’s useful to everyone involved with livestock and it’s not challenging to be involved with,” David said.

“It certainly helps to constantly review your practices and I encourage everyone in the industry to get involved.”

* Jalna feedlot was one of the first commercial feedlots built in southern Australia, developed by former ALFA President (1974-76) John Richardson. Its development is covered in detail in the history book, “Grainfed: The history of the Australian lotfeeding industry,” written by Jon Condon, available from the Australian Lot Feeders Association. Ph 02 9290 3700.