A NEW book chronicling the colourful history and people who have shaped the Australian lotfeeding industry over almost 70 years will be officially launched at the BeefEx 2014 industry conference on the Gold Coast next month. 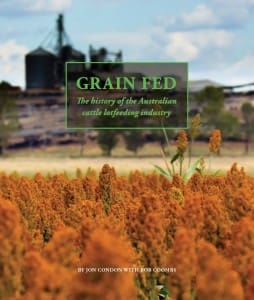 “Grainfed: The history of the Australian feedlot industry” is a 200-page coffee table style book including 85,000 words of text and 150 black & white and colour photos – many of considerable historical importance, contributed by the industry’s early pioneers.

The book was written by Beef Central publisher Jon Condon, with support from former ALFA executive director, Bob Coombs. Both have worked closely with the Australian feedlot industry for the past 35 years.

“Grainfed” provides a chronological account from the earliest origins of lotfeeding in this country in the 1940s, along with the key events and individuals that shaped the industry’s evolution through to the present day.

With many of the industry’s early pioneers now getting on in years, it became increasingly important to capture their memories and recollections of the pioneering era for posterity. The book also discusses, at length, many of the lotfeeding sector’s major contributions to the broader Australian cattle industry, including:

Former president of the Australian Lot Feeders Association, Robin Hart, collaborated closely with the authors on the development of the book.

“The history has been almost thirty years in the making,” Mr Hart said.

“It had its origins in a feedlot field day held at Dalby in 1986, which proved such a financial success through patronage that funds were put aside as a foundation for the history book project.”

Mr Hart said the time taken to draft the book demonstrated the efforts made to ensure it provides an accurate and balanced representation of the sector’s history.

“While the gathering and collation of the industry’s history from countless sources has been an arduous task, it has led to an authoritative document that finally details on paper the anecdotes, images and background of a history that might otherwise have largely been lost due to the passage of time.”

Watch our video interview with Robin Hart above

The publication also profiles all 14 of ALFA’s former and current presidents (some have served multiple terms) including their recollections of the issues of the day, and the many challenges faced by lotfeeders since the representative body was formed in 1970. Many early presidents, including Queensland’s Don Bridgeford, and Victoria’s John Richardson, showed remarkable powers of recall, given that their periods of service ended more than 40 years ago. Lotfeeders were viewed with some suspicion by the grassfed sector, as well as graingrowers, in early years.