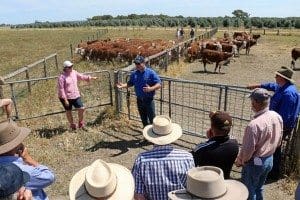 The day was hosted by Herefords Australia with support from Meat & Livestock Australia’s More Beef from Pastures program, and Coopers Animal Health.

The Millicent field day was the third in the series, following similar acclimation days at Adelong, NSW, and Millmerran, Qld.

Dr Strohfeldt said the field days were an opportunity for producers to learn stock handling techniques to reduce the pressure on anti-microbial drugs and vaccines. He said best practice weaning techniques could result in immediate post-weaning daily weight gains of 0.5-0.7kg.

Calves should be weaned at a set time or in tougher seasons once cow body condition declines. In poor seasons, calves may be weaned down to a minimum of 100kg liveweight.

“Good handling techniques on-farm in an animal’s first six months of life will be with that animal for life,’’ Dr Strohfeldt said.

“We wean cattle to manage herd fertility, the land and ensure sustainability.’’

Dr Strohfeldt said calves often suffered from confinement anxiety during the first few days of weaning. Up until that point, calves are rarely locked inside four fences where the pressure is more intense, but it was possible to reduce that level of stress with intensive handling techniques,’ he said.

“A good weaning yard has strong panels with not a lot of gap between rails – rubber belting around the sides will keep the smaller calves in.’’

A supply of fresh water and quality hay was not only critical to achieving post weaning growth and production performance, but the hay could be used to reinforce daily positive achievements.

Holding paddocks are ideal for working the weaners as a herd each day of the weaning process.

Once weaners leave the holding paddocks, pasture quality should be a minimum of 11.5 megajoules of energy and 15 percent protein to sustain growth rates, he said.

“When it comes to clostridial (5-in-1 or 7-in-1) vaccination, ideally the first dose should be three weeks before weaning, as the stress of vaccination can be ameliorated while the calf is on its mother. This should be followed by a booster shot four to six weeks apart,’’ Dr Strohfeldt said.

He urged producers vaccinate with Bovilis MH + IBR at weaning to reduce the effects of Bovine Respiratory Disease in commercial herds both on farm and later in life as they enter the feedlot production system.

“The immune status of cattle is complex, with many factors involved, and is difficult to modulate. Vaccination gives an element of control on these significant production diseases,’’ he said.

One of the key driving factors of respiratory disease was how stressed an animal was when it arrived at the feed yard.

“Stress from many different events early in life is cumulative, and contributes heavily to the disease dynamics we see in feeder cattle. If we can control the levels of stress and anxiety in cattle through good yard weaning practices, and improve the immune system through targeted vaccination, the end result is much better for the animal and the producer,” Dr

“Calves need to be yard-weaned, vaccinated and going forward in condition before entering the feedlot to have the best chance at success and performance.

“The yard weaning process has a lasting effect on the life of the individual animal in the breeding herd too, especially in females where fertility and puberty are driven by body weight.

“If we wean 1500 animals in a year and they are all gaining 0.5kg a day during the yard weaning process, that equates to 750kg of beef a day or 3750kg after five days of weaning – a truly solid return on investment for some basic TLC,’’ he said.

Some feedlots are paying suppliers up to $8/head to vaccinate weaners with Bovilis MH + IBR or supplying the vaccine directly to the producer.

“We know the cattle will perform and if feedlots are a marketing option, then yard weaning and BRD vaccination will be in your favour,’’ Mr Donoghue advised field day visitors.

“We encourage producers to pre-vaccinate three to four weeks before the cattle are sent to the feedlot to increase immunity.’’

When handling weaners in the yard on day-one, Dr Strohfeldt recommends initiating movement from the front of the herd, using the natural instincts of the lead animal.

“When the lead animal licks its lips, it is accepting pressure and will go wherever you want it to move,’’ he said.

“Place pressure on the animal by taking a step towards it to initiate movement – if the animal steps backwards, take a step back and release the pressure. The aim is to initiate voluntary motion amongst the group – let them decide on where they want to go and control their movement to that point.

“Move the mob from corner to corner in the yard until they move as a herd. Work with the lead animal to control pace by working on body position relative to his. Walk against the animals to speed them up, but walk with them to slow them down.

“As soon as the lead animal walks off, encourage the rest of the herd to follow in an orderly fashion. Each time the herd should be less disjointed.

“Handlers need to constantly read the cattle and observe what they are telling us. If the cattle have their heads up, it means they are stressed or uncomfortable. An animal that chews and walks away from pressure calmly is comfortable with the situation.”

Dr Strohfeldt advised not spending more than 30 minutes each day working weaners in this way.

“If you cannot control the situation, ask yourself why and do not blame the cattle,’’ he said.

On the second and third day, calves should be introduced to walking through gateways and on day-four, they should be walked through an open crush, quietly without anything touching them.

“By the end of the weaning process, the cattle must display discipline by being quiet, walking in a straight line and having brakes,’’ Dr Strohfeldt said.

Once a mob reached more than 200 head, it was advisable to use two people in the pre-conditioning process.

The length of the yard weaning process was decided by the response of the cattle.

“When animals stop bellowing, eat well, walk straight and have been taught how to stop, we are able to stop,” he said.

Typically, the process should take between two and seven days.

He said lotfeeders wanted performance rather than cattle lagging behind in feeding programs.

“We advise producers to follow best practice – the cattle don’t necessarily have to be bunk trained but have been on hay and going forward,’’ Mr Heinrich said.

“I normally wean calves in smaller yards but now I will use a bigger yard and move the cattle daily from end to end,’’ he said.

Tips on improving your weaning program: