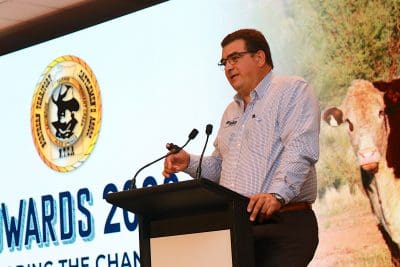 ADOPTION of research and development in the northern cattle industry, when compared to other parts of the country, has been low, Meat & Livestock Australia managing director Jason Strong told the Northern Territory Cattlemen’s Association conference in Alice Springs on Friday.

A rethink and change in MLA’s approach to research in the north, under its “fewer, bigger bolder” policy, has led to a new program of projects aimed at maximising impacts from research investment and driving greater producer adoption of best practice.

At the NTCA conference Mr Strong provided an overview of six research programs which are specifically targeted at boosting northern cattle production, including:

Designed to address the industry’s “big complex challenges”, the NB2 program’s goal by 2027 is to yield $20 million in net benefits per annum, through increased production of 10 million kilograms liveweight of cattle.

This will be delivered across 250 northern beef businesses, with herds of least 800 adult cattle equivalents.

Across the seven year program the goal is to create an industry legacy of:

One of the first phases of the project – to be known as ‘Pathways to Practice’ – involves the establishment of six producer pilot groups across northern Australia.

The use of pilot groups to enable producer to producer learning, with facilitators to guide progress, was ultimately “the key to practice change”, Mr Strong said.

“We are currently in the final stages of contracting these six groups and in the coming weeks MLA will be ready to announce the groups, their locations, and keys areas of focus. This is a significant and extremely positive step forward for our Northern industry,” he said.

There was also strong interest in the Northern Territory in further study into the use of analgesics and antiseptics at branding time to quantify the production benefits in extensive northern cattle operations, Mr Strong said.

The next phase are trials under commercial conditions which are occurring across six Producer Demonstration Sites (PDS) in the Northern Territory, three in Western Australia and one in Queensland, all utilising peer to peer learning.

‘Rail and long distance travel’ research underway by MLA is examining the potential for the inclusion of a rail pathway for MSA eligibility, through enabling the MSA grading of large cattle numbers which have previously been ineligible, whilst measuring the impact of alternative management strategies on consumer outcomes.

The study will provide definitive data on the impact of transport alternatives of direct relevance to the Northern cattle industry.

Other findings from the research related to transport alternatives and management, including trucking arrangements and the use of a rest and recovery period pre-slaughter, are expected to be of substantial benefit to the production and processing industries including transport operators and related services such as trucking yards.

Cattle ticks have the most devastating impact of any parasite to Australia’s cattle industry, causing in excess of $160 million in losses each year.

A practical single does vaccine that gives season-long cover from the time of injection has long been seen as a crucial goal for the industry.

Mr Strong said MLA funded research towards the adoption of a cattle tick vaccine is showing promise, with a single injection of the experimental vaccine stimulating an immune response that was 76.9pc effective when the cattle were infested with ticks 56 days after the injection.

The immune response peaked 28 days after the vaccine was injected and persisted for more than one year. This suggested a single dose of the vaccine might be possible for future tick control.

However, when the vaccine was given to the cattle for a second time 12 months after the first injection, there were some tissue reactions at the injection site, which means that more work is needed to improve the vaccine’s safety.

The ground breaking advances in vaccine research globally over the past 12 months in the race to develop COVID vaccines may also have some application to this research, Mr Strong said.

“We see what has happened with the development of COVID vaccines particularly, there are going to be technologies that come out of the process which we may be able to apply in some of our R&D, and hopefully this is one otf he areas that will move that forward.”

A major challenge for MLA in the north is to find ways to increase adoption of phosphorus supplementation.

In northern Australia, only a small number of cattle that are grazing on phosphorous deficient pastures are being managed with supplementation. This is due in part to perceived difficulties in implementing wet season phosphorus supplementation on extensive properties.

The estimated number of producers observing the demonstration site includes more than ten properties, representing over 2 million hectares and 50,000 breeders.

Pregnancy rates are estimated to increase by 12pc in maiden heifers, 20pc in first calf heifers and 40pc in breeders.

The mortality rate will be reduced by 3 pc per year with the extra value of calves weaned being $102 per year for each female mated. The cumulative return on investment for money spent on supplementation will be in the order of 280 pc after 4 years.  Based on initial findings, it is estimated the ‘Easy P’ system can return $2.50 for every $1 spent by producers.

CattleBoss soon to be launched

MLA will also soon be launching CattleBoss, which is essentially an extension of MLA’s ParaBoss program for cattle parasites.

Cattleboss will be the key platform for the development and extension of national best practice management for cattle exposed to mixed parasite infections which will ultimately reduce their economic impact and deliver improved animal welfare outcomes.

MLA has also scheduled several research and development events for Northern producers in 2021 including BeefUp forums and Business Edge, Breeding Edge and Nutrition Edge workshops across the North, which can be viewed on MLA’s events page here.

With a continuance of the forecast global protein shortage on the back of African Swine Fever and demand set to grow at unparalleled levels as consumers in key regions become increasingly affluent, Mr Strong said he believes the industry is looking at a three to five-year window of opportunity and prosperity.

But this opportunity was not something the industry could take for granted.

Committing to industry collaboration and adopting research outcomes was essential.

“We have incredible opportunity in front of us,” he said.

“Let’s not listen to the all-too-common voices telling us all the reasons why things can’t be done, let’s find the one reason why it can be.

“And I will finish with some words from Margaret Mead – “Never doubt that a small group of thoughtful committed citizens can change the world.  Indeed, it is the only thing that ever has”.”