Alltech is devoting a growing portion of its operations to researching and incorporating algae into its commercial feed products, as a sustainable source of protein, as well as being rich in omega 3 anti-oxidants useful in delivering ‘functional foods’. 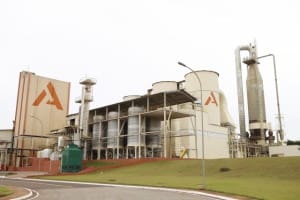 Alltech algae production facility in Kentucky. Click on image for a larger view

The company recently started construction of a second algae generation plant in Brazil, to join a similar existing facility in Kentucky in the US.

The new facility near Sao Pedro will be the largest algae and yeast generation plant for animal nutrition in the world. The $63 million investment will generate more than 200 direct and indirect jobs.

“The company’s experience with its first algae manufacturing plant in Kentucky has been a great success, and this is the reason for making the investment in Brazil,” company spokesman Dr Mark Lyons said in a press release.

“Consumers are increasingly looking for something different, and algae can be a critical part of creating new market segments. The future of nutrition lies in functional foods, and we are determined to meet the increasing global demand for DHA omega-3 oils on the farm and in the marketplace,” he said.

There are two common types of algae: autotrophic and heterotrophic. The former requires sun for photosynthesis and for the production of energy; the latter uses oxygen in the environment for their development and production and do not need any light. Alltech produces heterotrophic algae, grown in eight-storey high stainless steel fermenters.

With a high concentration of anti-oxidant rich DHA omega-3, algae offer a range of possibilities as an ingredient in stockfeeds, Alltech says. Some of these include:

“In view of the growing world population, we believe algae will play a key role in animal and human nutrition,” said Guilherme Minozzo, Alltech’s vice president for Latin America.

“We’re seeking to develop trends, address needs and surprise our customers with innovations that help them in their endeavour to feed the world in a sustainable manner.”

“Agribusiness requires technologies for enhanced utilisation of natural resources and improved animal performance. For this reason, all our investment efforts in science and technology are aimed at improving the health and well-being of our animals, meeting the demands of the consumer and protecting the environment,” Mr Minozzo said.

Late last year, Alltech announced plans to expand its existing algae generation plant in the US. The plant is one of only two in the world producing high-DHA heterotrophic microalgae on a commercial scale, producing 15,000 tons of algae. It has already been updated once since opening in 2011. 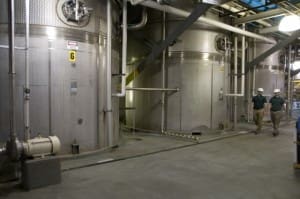 “Even with this growth, we will have the need for continued expansion globally because a commercially available source of algal DHA benefits the entire food chain, including human health with DHA as an essential omega-3 fatty acid,” Ms Timmons said.

In humans, the nutritional importance of DHA omega-3 is linked to brain and eye development as well as the reduction of coronary heart disease and Alzheimer’s.  There is also a link between sufficient dietary DHA omega-3 intake and depression.

When used in animal diets, DHA omega-3 from algae can increase immunity, fertility and overall animal health, manufacturers claim. Benefits to the livestock producer include its availability and sustainability, as well as the branding opportunities it provides as a value-added ‘functional food’ product in the marketplace.

Already some omega-3 enriched beef brands have appeared in the US marketplace.

Traditionally, omega-3 has been supplied through fish oil, which is dwindling in supply, besides having a taste not favoured by consumers. DHA omega-3 produced through algae is a viable alternative to fish oil that can be quickly produced commercially with limited land use, and no detectable ‘fishy’ taste in the functional foods sold to consumers.

“It’s seen as a form of natural enrichment with additional benefits, such as improving the visual and sensory experience of food, thereby offering food producers additional means to market to and please the consumer.”

“As we look ahead, we see algae as fundamental to Alltech’s future growth. The bottom line is that algae improve returns for the farmer with better environmental sustainability, while also creating a healthier population of both humans and animals,” Mr Bourne said.

Alltech says it plans to further increase its investment in its algae division, further increasing its production footprint throughout the world to meet the demand for a sustainable source of DHA Omega-3.

Algae are the fastest growing plant organisms in nature and have the ability to convert large amounts of carbon dioxide into oxygen.

Algae also form the base of the aquatic food chain. They produce carbohydrates, oils, protein, vitamins and organic minerals. Since they are aquatic, algae grow much faster than land plants, as they do not have to expend energy growing roots and cellulose-support structures like trunks, leaves and stems. Without the need for support structures, algae can triple or quadruple their biomass every day. This rapid growth means that one acre of algae can produce the same amount of protein in a year as 21 acres of soybeans or 49 acres of corn.

Algae’s biodiversity means that they have many potential uses. Algae are used in food, animal feed, cosmetics, pharmaceuticals, and biofuels. They can also be used for carbon sequestration and bioremediation of waste and waste water.

Alltech Algae in Winchester, Kentucky, is one of the largest algae production facilities in the world, producing 10,000 tonnes of dried algae powder each year at its current stage of development. It houses a variety of sizes and types of fermenters for growing heterotrophic algae. Algae production starts with inoculation of a flask in the lab. A dense culture of algae cells is grown and transferred to a seed fermenter, and finally on to one of factory’s eight-story tall production fermentation tanks. These tanks are fully automated, monitored and managed from a central control room. When the algae are ready to be harvested, it is transferred to centrifuges to remove the growth solution, and spray dried and turned into a powder, for use in stock feed or myriad other applications.