This is why MLA is calling 2016 the ‘year of the restocker.’ This chart shows yearling steer prices differentiated by the type of buyer – restockers (yellow line), processors (blue) and feedlots (green). For several years these three lines have tracked each other very closely. However, last year, as restockers entered the market looking to get more mouths on grass, they paid significantly higher prices than feedlots or processors, at times up to 50c/kg liveweight higher. But as herds return to more normal levels toward 2018, the yellow line is expected to re-align with the processor and feedlot prices. Saleyard data from Monday this week showed that restocker prices were back down to a 17c/kg premium compared to processor and feeder lines. Source: MLA

Worsening drought conditions in Queensland are set to further exacerbate the expected two-speed recovery of the Australian cattle herd.

In its herd projections released in January, MLA said reasonable feed conditions in Southern Australia should help to return herds in southern NSW, Victoria, South Australia and Tasmania to normal levels (normal defined as the 10-year-average level) by next year, 2018.

However, drier conditions in the north would delay the Queensland herd’s recovery to 10-year-average-levels until at least 2020-2021.

Since MLA’s initial forecast was released, a further seven shires have been added to Queensland’s drought-declared list, taking the area of the State now officially considered to be in drought to a record 85 percent. 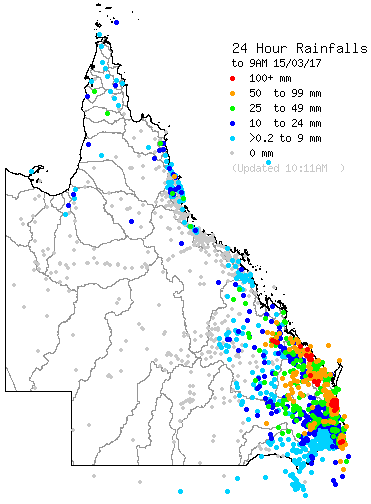 Rain in the 24 hours to 9 o’clock this morning. Click on map to enlarge

(Some nice falls of rain were recorded in parts of Central Queensland and the Darling Downs in the past 24 hours, but continued the trend of variable, patchy totals and, as the map left shows, did not cover a significant area).

With cooler temperatures starting to return and winter approaching, is another flood of drought-forced cattle sales in Queensland now likely?

Some Queensland cattle producers at yesterday’s Global Market Forum in Brisbane indicated to Beef Central that they feel that is now on the cards, commenting that many producers have held onto cattle longer than they should and, having not received the rain they had hoped for, will now have to destock at the same time before winter kicks in.

Asked if the worsening drought in Queensland could impact MLA’s expectations of national growth in the Australian cattle herd this year, MLA market information manager Ben Thomas said it was unlikely.

“The Queensland herd is at a really low level, around 10-11 million head, the lowest it has been in some time,” he said.

“In terms of thinking about whether there potentially could be another flood of cattle onto the market as has happened in the past, and a flood of females onto the market, I don’t think it will be like what it was in 2014, 15 and 16.”

“So yes it may slow it down a little bit down little bit, but I don’t think it is going to slow it down dramatically from what the current estimates are.”

Mr Thomas said MLA was confident there had been enough females retained and reasonable-enough branding rates to see an increase in Australian cattle herd in 2017.

It believes the herd will increase to just below 27 million head by the end of the year, before returning to the 10-year-average-level of 27.5 million head in 2018. As that happens it will gradually dilute the powerful influence restockers have recently had.

Last year restockers were paying up to 50c/kg liveweight more for feeder steers than lot-feeders and processors.

However, that premium is eroding. Saleyard data on Monday showed it was back to 17c/kg.

Since peaking in October 2016, cattle prices have come back between 10 and 15 percent, with some indicators falling 100c/kg carcase weight in that time.

Where to now? US feeder prices offer a clue

A good clue for what to expect going forward is to look to America, Mr Thomas said.

When the US went through a short supply situation the US feeder market shot up by 133pc on its long term average in the space of two years.

Australian feeder steer prices have followed a very similar trend, not quite matching the 133pc, but still almost doubling with growth of close to 100pc.

The US feeder cattle market took about 15 months to drop 45pc to where it is today, around AUD 350-400c/kg liveweight.

If Australian feeder steers continue to follow the same trend as the US feeder cattle market, it is highly likely they will come back down to AUD 250-300c/kg liveweight by the time we have recovered to normal production levels in 2018.