THE man in charge of Meat & Livestock Australia’s newly restructured Research and Development program has been meeting with livestock producers in recent weeks to explain how the new producer-driven consultation process will work.

At a BeefUp Forum at Esk in Southern Queensland on Tuesday and a field day in Birchip in north western Victoria on Wednesday, Dr Matthew McDonagh also provided updates on how some key R&D projects are progressing (more on this below).

Dr McDonagh said MLA’s new R&D decision making process is designed to ensure grower input is at the centre of future MLA decisions on how R&D projects will be selected and funded.

The new structure is based largely around the long-running NABRC (Northern Australia Beef Research Council) model and is designed to make R&D decisions based on producer feedback through 20 regional beef research committees around Australia.

Each regional beef research committee – of which there are 11 in the northern region, 7 in the southern region and 2 in the western region – will meet twice a year.

Growers will be urged to share their views on R&D priorities with their local beef research committee, and this input will then be fed up to the relevant overarching committee – NABRC, SAMRC or WAMRC – to form an R&D investment plan for northern Australia, southern Australia and western Australia.

“We’re looking to be much more responsive”

“We want producers to come together and really tell us what they see as the regional priorities for R&D and what the big industry issues are that they think should be included in the MLA R&D program,” Dr McDonagh told about 80 producers at the Esk BeefUp forum on Tuesday.

“We’re looking to be much more responsive. 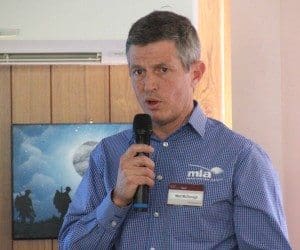 MLA will then call for projects and seek R&D partners to address the key priorities identified. The proposals will then be put back in front of the regional chairs to decide which will deliver the most beneficial outcomes for industry.

The entire process will also be overseen by Cattle Council of Australia’s R&D subcommittee, and will be aligned with the pillars of the next five year Meat Industry Strategic Plan, which is set for release by RMAC next month.

“It will all be producer driven,” Dr McDonagh said.

Dr McDonagh also provided some updates on the progress of key research projects. These included:

Numnuts for beef: A new pain-free castration device developed for sheep is about to be trialed in the cattle industry. “Numnuts” is an elastrator rubber-ring device that is equipped with a local anesthetic syringe. It provides pain relief when the band is attached around the testes and tail of sheep by triggering an injection of anesthetic which numbs the tissue. The procedure allows young lambs to mother up more effectively, results in fewer losses and prevents the production hit to growth that occurs after castration. A pilot trial is now planned for the cattle industry. “We are going to trial it on young bull calves up to three months of age,” Dr McDonagh said.

Psyllid resistant Leucaena variety showing promise: MLA in partnership with the University of Queensland has now signed two agreements with commercial partners in Central Queensland to grow seed plots for the new psyllid resistant Leucaena variety “Redlands”, named after the Brisbane-based research centre at Cleveland where it was developed. With grazing trials expected to follow, the variety is expected to be commercially available within about three years. The new variety is expected to open up 1.5 million hectares of Queensland to potential Leucaena production, which could in turn produce a net benefit to the industry of $500 million or more per year. About 200,000ha of Queensland has already been planted to the forage-tree, producing an estimated $68 million increase in net beef production for the State. Dr McDonagh said that Leucaena not only improved growth rate of cattle, but, importantly, cattle that fed on Leucaena also produced less methane emissions. “So why that is beneficial is that methane is basically an energy loss out of your animal,” he said. “When your stock are burping out methane, the more we can fix the carbon into the animal, the more kilograms of beef we can produce. That is a fundamental driver into why MLA would invest time and money into managing the national livestock methane program.” The new variety was also known to produce a low seed number which was designed to reduce its potential impact as a weed.

Macro Algae could cut cattle methane emissions: Recent trials conducted through the national livestock methane program have shown that including 1-3pc of “macro algae” in the diet of sheep can cause dramatic reductions in methane emissions from those animals. Natural compounds contained in macro algae effectively cut down methane production in the rumen. The trial showed that the process reduced methane emissions from sheep over 72 days by up to 80pc. MLA is now looking to test if similar reductions can be achieved by adding macro algae to the diet of feedlot cattle.

“It basically wipes out a huge part of methane production from an animal, and you can turn that into energy that is invested in feed efficiency and growth,” Dr McDonagh said. The Australian beef industry had already achieved reductions in methane emissions by 14pc over the past 30 years through heavier carcase weights and faster growth rates of cattle, and had also reduced water use by 67pc over the same period, an achievement helped by the capping of numerous previously flowing artesian bores.

Northern producers urged to push for more objective data: Analysis of the northern beef industry shows that the top 25pc of producers receive roughly the same price per kilogram of beef as the average producer, but make higher profits through lower costs of production and by producing more kilograms of beef per hectare per 100mm of rain received. This is partly achieved through focusing on fertility to ensure their herds are not carrying breeding cattle which do not successfully produce a calf each year. “If you are out there picking a bull and it has no objective data, no estimated breeding value for weaning percentage of daughters, without that information you can be introducing huge variation into your herd,” Dr McDonagh said. There was huge potential in tropical breeds to take advantage of the progress that has been made through objective measurement in southern breeds. “But we just don’t have the commercial demand for EBVs in the north, and the seedstock producers aren’t going to deliver you commercial EBVs unless you are demanding them,” he said. “It will only happen if you as producers are demanding objective measurements in your herds.”