The combination of unusual seasonal conditions across summer and autumn and high feedlot demand is triggering what is shaping up to be an all-time record winter silage program across central and northern NSW and southern Queensland.

A number of factors have merged to trigger the prospect of a huge winter silage program across Eastern states, stakeholders say. 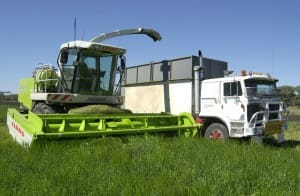 The failed summer season in many areas greatly limited summer silage production, based mostly on corn and sorghum. Compounding that, high levels of activity among lotfeeders as cattle were placed onto feed as a drought mitigation tool put a lot of pressure on available silage and roughage stocks.

Hay became increasingly expensive as the drought wore on, and many feedlots literally ‘dug deep’ into their silage reserves, leaving their silage inventory much smaller than normal heading into winter.

Another contributor has been the unusually wet autumn in many areas which has left a good soil moisture reserve, prompting some producers with access to cultivation to consider a winter silage program to exploit the opportunity.

As reported earlier on Beef Central (click here to view), there was an explosion in demand for oats seed earlier in traditional planting areas, following the drought-breaking rain from late March.

“I’ve never seen the ducks align so well as they have this year for a winter silage program, in the ten years I have been working in the silage industry,” silage consultant Trevor Schoorl told Beef Central yesterday.

Yet another factor behind the push into winter silage production this year is the looming shortage of heavier export weight feeder steers (400-500kg), forcing lotfeeders to buy lighter cattle, earlier, and backgrounding them for feedlot entry in the back half of this year. This trend will be discussed in a separate article to be published later today.

Mr Schoorl, technical services manager with silage inoculant supplier, Lallemand, estimates that only 60 percent of normal summer silage volume was put-down last summer across central and northern regions of NSW and southern Queensland, due to the dry conditions.

“And a lot of what was going into the pit was sub-optimal material – drought-affected grain sorghum and other low yielding material, because they had to,” he said.

“Users chased those irrigated summer crops that were around, and paid big money for them, to try to compensate. I heard of some corn crops were being bought for $75/tonne, standing in the paddock.”

Add harvesting cost and some unusually big distances for cartage, and some of that summer silage could easily have cost $80/$90 per or more, landed in the pit.

We’re budgeting for a massive rise this year, over what we would normally see grown over a normal winter forage crop cycle

Given all that, it was not surprising that there was an extraordinary level of interest currently in winter silage and forage.

“We’re budgeting for a massive rise this year, over what we would normally see grown over a normal winter forage crop cycle,” Mr Schoorl said.

“And the demand is not only going to come from feedlots. A considerable part of it is coming from backgrounders and even breeders for their weaning programs, because feeder cattle this year are well behind on target weights for feedlot entry, due to earlier nutritional setbacks caused by the drought.”

While rain in the past week in some winter forage growing areas had now virtually assured a crop, others would still be looking for an inch or two over the next couple of months to guarantee a crop worth harvesting and ensiling.

Contract harvesters were already bracing themselves for a ‘very intense’ cutting period, due to the sheer size of the likely crop and the relatively small window for optimum harvest in winter-grown forage.

“Some growers will start to fill a gap with their winter cereals, if they can get a crop in the ground,” Mr Schoorl said.

“Particularly given the pessimistic longer-term seasonal outlook for next summer, a winter forage crop this season could take on an even higher priority. But if we do see good spring/summer rain later this year, I’d expect to see an exceptionally large summer forage program at the end of this year, also, given how depleted silage stocks currently are.”

Given decent rain, silage next summer could easily be 50 to 75 percent larger than normal, to try to build reserves, he said.

“My advice to growers considering growing a winter forage crop this year is to firstly, get in touch with your preferred contract harvester to let him know. There could be heavy competition for available harvesting equipment, if the crop shapes up to be as big as we anticipate,” he said.

“Everybody will be wanting to harvest around the same time, and the issue with winter/spring silage is that temperatures are increasing, as harvest approaches. So unlike summer forage, the harvest window actually shortens-up, very quickly, the longer the season goes. It’s critical to get it off when it’s ready.”

While most of the winter silage this year was likely to be barley or some triticale, the large oats planting earlier might also see more oats go into the pit, partly because of the reduced number of cattle available to utilise it as standing feed.

The mild start to winter had also seen early crops much further advanced than would normally be expected.

“I know of one contractor who has chopped a really early crop that has run out to head even now. Highly unusual. But they will be going flat out through September, and into October, for later planted crops.”

Asked at what price-point decisions would be made about taking a winter cereal crop through to grain, rather than silage, Mr Schoorl said it depended on a number of circumstances.

“Contract-grown crops will make the decision straight away, and it will be thrown back onto the guy who wants to buy it. If they can get $300/t for grain, at a four-to-one ratio, they’d be looking at getting +$70/t for forage value.”

“But if it’s producers or feedlots who have grown it themselves, and they need the fodder for stock, it can take on a different relative value. It adds a value to the silage beyond what it the crop would otherwise be worth.”

A good example of a feedlot operator looking at a winter silage program this year is Rangers Valley, near Glen Innes.

“But when it didn’t rain over summer, followed by the autumn rain from the end of March, we’ve put in a lot of oats,” he said.

“It’s hard to find enough cattle to feed it, so we’re likely to ensile some of that, which is highly unusual for us,” Mr Mackay said.

“Many feedlots’ silage reserves would be low, because of what happened over summer, so I suspect there are a lot more like us, who are tempted to do some winter silage,” he said.

“The lack of cattle available to use the large oats crop that was planted might tempt a lot more people to put the crop down in pits.”

For those who are not that familiar with managing a winter-grown forage crop, Beef Central asked Lallemand’s Trevor Schoorl what the other key considerations were with winter silage production and ensiling.

“Firstly, it’s important to get moisture, or dry matter levels correct,” he said.

“Secondly, when dealing with a winter cereal for silage, you’re dealing with a crop that has a hollow stem. That means compaction in the pit is critically important. If it gets a little bit on the drier side, it can actually produce a lot of spoilage in the pit, at feed-out, because the air can more easily penetrate back into the pit. Where that risk exists, Lallemand recommends using one of its range of silage inoculants, Lalsil, which is well-suited for use with winter cereal silages.”

“A lot of our more northern contractors are telling us that, subject to a couple of inches more of follow-up rain, they will want to double their orders of Lalsil, this year,” Mr Schoorl said.