THE organic segment of the beef industry has a reputation for being more heavily-exposed than others in times of drought, but the sector has withstood the past 12 months considerably better than many might have expected. 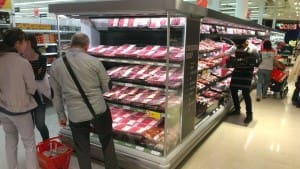 Cleavers Organic beef on offer in a Coles supermarket. Click on image for a larger view.

Organic beef programs across Eastern Australia continued to grow during 2014, showing great resilience despite the seasonal challenges of the past two years.

That’s being heavily influenced by global consumer demand, with a recent independent survey showing beef was the second largest growth segment across the entire Australian Organic food spectrum, second only to dairy, with a value estimated at $198 million in 2014.

Alister Ferguson, who runs the nation’s largest certified organic beef supply chain businesses, Arcadian Organic and Natural Meat Co, provided Beef Central with a comprehensive update on how the sector has fared during the past 12 months.

While Arcadian’s weights on Certified Organic slaughter cattle this year have been back 30kg or more on average (carcase weights in an average year are around 285kg),  that has been compensated-for by growth in the number of cattle now coming through the Certified Organic pathway, as more producers complete conversion to organic status. See today’s separate profile on large northern producers currently adopting Organic Certification.

In fact Arcadian has had to source additional contract kill space in Organic-certified processing plants, to cater for the growing numbers of cattle seen this year.

Arcadian’s lift in turnoff numbers has more than compensated for lower carcase weights, with overall production volume up about 20 percent compared with 2013.

Between 650 and 1000 head per week have gone through company’s export and domestic Organic beef programs this year. Certifying body Australian Organic recently estimated that about 100,000 cattle had gone through Organic supply chains across Australia in 2014.

“We’ve had more producers inquire and sign-up for Organic certification this year that we have ever seen over the nine years we’ve been in business, because everybody got absolutely belted in the drought and had to cop what they could get, price-wise,” he said.

“A lot of them came to the realisation that they either had to ‘do something different’, or get out,” he said.

“This year has been an absolute catalyst for adoption, rather than a deterrent – as more producers are starting to align with a dedicated supply chain and work more collaboratively.” 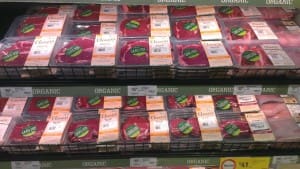 “For us to go and forward-contract orders, we need to have an assured 12-month supply, and that’s why it’s crucial that suppliers don’t treat it as an option – it’s either in or out. We see our business’s big strength as being that we’re a fully-integrated model, from dedicated producer supply through to dedicated end-customers.”

One of the key features in the Organic supply chain over the past two very dry years has been that while the conventional cattle market has come under considerable price pressure due to over-supply, certified Organic price grids remained largely unchanged.

“It’s one of the big strengths of being involved in a producer group, and sticking to the program,” Mr Ferguson said.

“Having those long-term supply relationships with customers here and overseas means the segment can avoid much of the volatility seen in the conventional cattle market.”

“At the moment, demand from our existing customers is pulling away from our ability to supply, but as more suppliers come on board, more customers will be added. We’re really looking forward to bringing more supply on, but the key for suppliers is to talk to us about the program, well in advance of gaining certification, so we can organise processing space and sales to keep pace.”

“None of this is spot market business – organic beef is very much program business, and it’s always been that way for the past eight or nine years. It’s been great for everyone in the supply chain,” Mr Ferguson said.

One of the obvious advantages in Certified Organic supply chains this year has been the stability of price, relative to the volatility seen in the conventional cattle market caused by drought and oversupply. 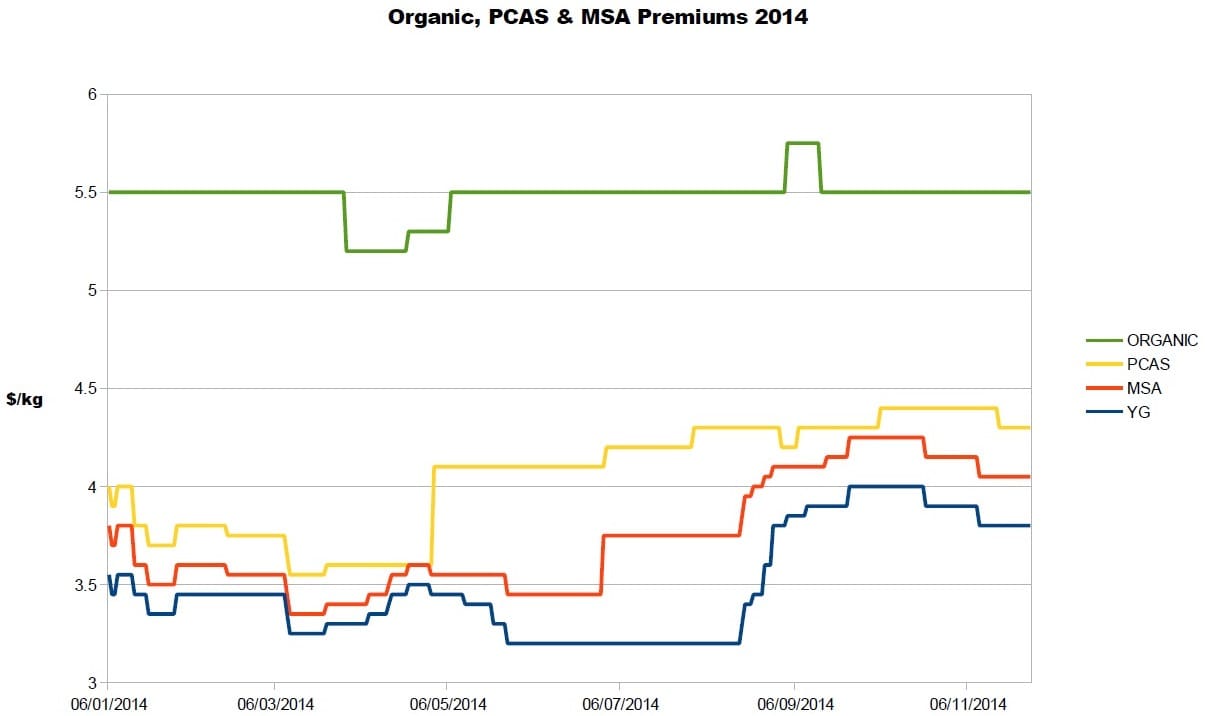 While prices for Organic cattle did dip a little mid-year, as this graph plotting a Central Queensland processor’s 2014 grids shows, the decline was nothing like that seen in the conventional grassfed yearling market.

Added to that, some new supply chain managers have emerged in the Organic segment in the past year or two, keeping competition for cattle high.

Premiums for certified Organic over conventional grassfed yearling cattle this year in Queensland have typically been 40-45pc, reaching 550c/kg for lengthy periods, as this graph shows.

“There’s been a very significant premium for Organic beef in the marketplace all this year,” Mr Ferguson said.

“That’s starting to narrow a little again now, as global demand for conventional beef rises, with record prices into the US, which makes it harder for Organic to maintain the sort of premiums seen earlier.”

So what happens next year if it rains, and conventional cattle prices rise sharply, as is widely predicted? Can Organic pricing maintain its premium, under those circumstances?

“If the rest of the cattle market moves up, the Organic segment will have to move up in parallel,” Mr Ferguson said. 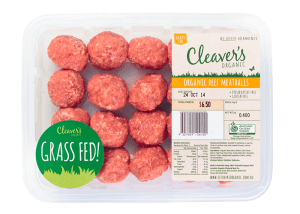 “If everything moves up next year, price wise, it’s our job, as supply chain managers, to make sure we’re maintaining those premiums for Organic beef over the conventional market,” he said.

“It may not stay at a +40pc premium as it has for periods this year, but it obviously needs to continue to make it worthwhile for suppliers. There are production costs involved. Suppliers have to stock more conservatively, they may lose the ability to trade cattle, and there’s no HGP. There are a lot of requirements that come out of it that mean there has to be a significant premium involved to justify the move.”

“At the same time, our export and domestic beef customers all realise that there are production sacrifices involved in delivering an Organic product, and are willing to work with us, on price, to reflect that.”

Another big challenge, as the A$ keeps falling, is the Organic industry’s ability to continue to service the domestic Australian market’s requirements, in the face of fierce competition from overseas Organic customers.

“In Arcadian’s case, we’ve taken the strategy that we will engage in all the available markets, so that we can grow with all of them as the segment expands. We’ve decided to stick with the domestic market, despite it being tougher in the past 12 months. Markets go up and down, and we’re committed for the long term to the domestic trade in organics,” Mr Ferguson said.

Just as there has been an explosion in demand for conventional grinding beef in the past 12 months, Certified Organic manufacturing meat is experiencing the same demand.

The climatic difficulties in the past 12 months has seen more Organic beef downgraded into manufacturing segments than normal, a trend which has not necessarily been reflected in livestock pricing, Mr Ferguson said.

Fortunately demand for Organic grinding beef is at all-time record highs, and a lot of that demand is at retail, rather than food service.