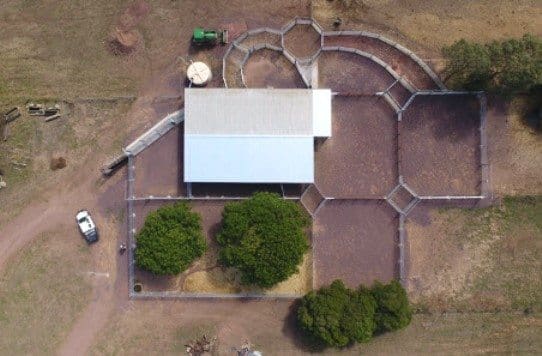 The investment on their property, Larakoona, included $20,000 for gravel, $10,000 for earthworks to prepare the site, extensive concreting and roofing, and a dust-suppression sprinkler system.

Improved cattle prices since 2015 was one of a number of factors behind the investment.

Mr Richardson said he had five ‘tactical’ reasons for investing in new yards rather than modifying the existing timber infrastructure:

“The original yards tended to work against cattle behaviour rather than with it,” he said.

“There were a number of other limitations that all added up to inefficiency, inconvenience and frustration, as well as compromised safety.”

Mr Richardson said his decision to make such a large investment in infrastructure was driven by a number of factors.

“My wife and I took over the property from my parents three years ago, after I had worked for them for about 10 years,” he said.

“Ideally, I wanted to get some big projects done early in our business ownership and we were lucky the profit we made last year allowed us to do that.”

“I could have put the money elsewhere, but our fencing, pastures and machinery are all in reasonable condition. I would like to expand the business in terms of scale, but that opportunity hasn’t arisen yet,” he said.

“I also could have put it into superannuation for the future, but I chose to invest in creating a better work environment for today. I’m 44, so I have about 20 years left in the business. There would be no point making a big investment in my work environment five years before retirement. This way I get the full benefit from it.”

In terms of return on investment, Mr Richardson said while the yards provided a pay-off in reduced stress on stock due to less time spent in the yards and reduced bruising, the main return was psychological.

“It’s more about the emotional wellbeing that comes from reduced frustration caused by the inefficiency of the old yards, and the reassurance of knowing safety has been improved, which affects family, employees and visitors,” he said.