A 10 year, $40 million investment in new water infrastructure and fencing has lifted the Beetaloo group of station’s carrying capacity from 20,000 cattle to 90,000.

BEETALOO Station in the Northern Territory, where a 10-year, $40 million project to develop new waters and fencing has just been completed, is in the market for 10,000 weaners to stock some of its newly developed paddocks.

John Dunnicliff and his family own Beetaloo Station, Mungabroom and OT Downs, which collectively span 1,050,000 hectares on the Barkly Tablelands.

With financial backing from billionaire Australian retailer Brett Blundy, the family has invested millions of dollars to increase the number of watering points on their Barkly properties from just 40 in 2002 to 600 today.

The ambitious development project has now been completed, and has increased the holding’s carrying capacity from 20,000 cattle 10 years ago to 85,000-90,000 today.

A similar development is also underway on neighbouring property Amungee Mungee, which is owned in partnership by Brett Blundy as the majority shareholder and minority shareholders Emma and Adrian Brown, daughter and son-in-law of Mr Dunnicliff and the owners of Northern Stock Water in Katherine. As reported this week Mr Blundy has also just negotiated the purchase of Walhallow on the Barkly from Paraway Pastoral Company.

The Dunnicliffs’ development program is focused on making as much of their country useable as possible.

“The basis of our business is putting water out on the country where there is grass, and putting cattle on it,” Mr Dunnicliff explained.

“That is all we do for a living, nothing terribly complicated about, and it works well.” 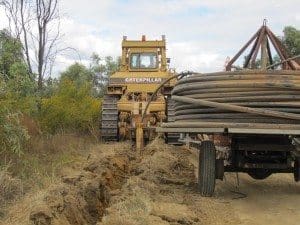 In addition to installing around 560 new waters (tanks and troughs), the Dunnicliffs have also laid about 3000km of poly pipe in the past 10 years – enough to stretch in a straight line all the way from Melbourne to Darwin.

One paddock they have just finished working on is half a million acres. It has never had a beast in it before, because it had no water in it.

“A lot of people say to us we’re crazy, and we respect that, they’re welcome to their opinion,” Mr Dunnicliff said.

“I think long term, if you want to utilise the land, you have to take the water to the cattle, you can’t take your cattle to the water. It doesn’t work.

“Cattle do two things, they make energy or they make product. You can’t sell energy, you only sell the product. If you don’t take the water to the cattle, you’ll burn up too much production, and that is not economic.” 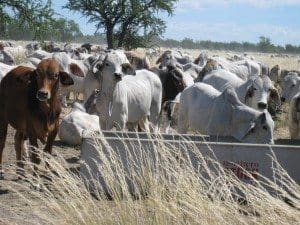 With the full water development project completed, the family is now in the market for 10,000 mixed sex store weaners to stock some of the country that has been newly opened up through the addition of water and fencing.

Former Elders stock agent Dave McGilvray has been sourcing cattle on their behalf, and so far has purchased about 5000 weaners from around the Charters Towers, Croydon and Cloncurry area.

Most have been spelled and fed in Cloncurry before being trucked to Beetaloo or Mungabroom, with Curly’s Transport handling most of the carrying so far.

“To date we have purchased over 5000, with others to look at as they muster,” Mr Dunnicliff said.

Mr Dunnicliff’s view is that investing in water and fencing to make full use of a property is a more cost-effective way to acquire additional beast areas than buying more country.

Increasing the number of waters has also reduced grazing pressure on areas of his property that were previously heavily stocked.

“When we took that country over it was running 700 to 1000 cattle on a water,” Mr Dunnicliff said.

“We cut that back to under 200, so from a grass point of view we have reduced the stocking rate dramatically.”

With the development stage now all but completed, the operation is now moving into the more intensive management stage.

“We haven’t finished because putting the waters in is one thing, controlling the grasses and managing the cattle is definitely the second stage of it, and you have got to do it, you have got to keep going.

“You have to go to a fair bit of trouble to make sure that country is being rested.

“If you just leave them on a water under any conditions you will eat out all of your perennial grasses.

Rotational grazing is now being employed to allow paddocks to be rested, while also providing greater efficiencies by enabling more cattle to be handled per labour unit.

Mr Dunnicliff said his family has been developing properties in different areas for a fair while now, and it has worked for them.

“The real thing that holds everyone back is whether you’re game enough to chuck the money at it, and get in and do it,” he said.

What does the waters intensification process happening across the Barkly region mean for local property values? Its the topic for an upcoming discussion in Beef Central’s Weekly Property Review.