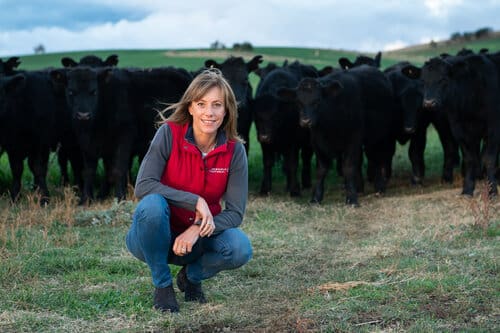 Agscent founder Bronwyn Darlington, with trial cattle on Carwoola Station, a 2000ha cattle and sheep property in the Southern Tablelands of NSW.

A NSW company developing a hand-held device to determine pregnancy status at an early stage using breath samples from breeding females has earned a $600,000 Commercialisation Grant from the Federal Government.

Agscent Pty Ltd received the grant this week to commercialise its agtech solution for improved livestock breeding and management.

The hand-held device draws in a cow’s breath, identifying specific volatile bio-markers which show pregnancy at various stages, allowing farmers to detect early pregnancy in livestock. The company has provisional patents applied for on a range of breath bio-markers.

If it lives up to expectations over accuracy, repeatability and convenience, the technology could dramatically change industry practises surrounding determination of pregnancy status, currently reliant on manual pregnancy testing or ultrasound.

The technology was the focus of a preliminary ‘proof of concept’ R&D project backed by Meat and Livestock Australia and NSW DPI back in 2018.

The first stage of that project was designed to determine the feasibility and efficacy of detecting specific volatile biomarkers in breath samples to determine pregnancy status in cattle. The device also had the potential to be applied to other non-invasive diagnostics related to productivity, health and welfare status, the project summary said.

In the second phase of the project, work has focused on developing the device that will be used in the field, with further investigation to determine whether it can be linked to other animal ID technology to allow individual animal identification and inclusion in farm management and decision support tools.

If successful, the development of the technology would allow beef producers to improve the efficiency and profitability of their enterprises by better managing reproductive performance in herds. This would have flow-on benefits for marketing, nutritional management and health and welfare, the report summary said.

The first was the livestock sampling device, which takes only seconds to collect breath from an animal in the crush. In a separate process, nano-sensors are then used to identify biological compounds in the breath sample, which change during pregnancy.

“We have been able to detect pregnancy at 60 days and in about 30 seconds but believe we can reduce this with further work,” Dr Darlington said.

The real breakthrough in the project development was in accurately identifying the bio-makers related to bovine pregnancy, she said.

“When we first started, we simply went looking for biomarker pattern differences with pregnant females. We quickly realised we could detect them, but it was necessary to really ‘clean-up’ the breath sample, because we are often collecting samples in less than ideal testing conditions. The environment is hugely challenging for this sort of work,” Dr Darlington said.

“We’ve now really refined that, and with this week’s grant, were now able to apply new sensor technology which is even more sensitive,” she said. “Working with CSIRO, we’ve made some significant strides in identifying more biomarkers for pregnancy. The grant will help pull all that together into a single-hand-held device, from the current three steps.”

The theory behind the technology, as well as key sensor components, has stemmed from human medical diagnostics.

“We’re taking that, and trying to apply it to completely foreign applications, in cattle, in totally inappropriate environmental settings,” Dr Darlington said.

“In human medicine, it often does not really matter if the results take a day or a week to deliver. But if you have a hundred cows lined up in the yards, you want to know the test results (in this case, pregnancy status) now,” she said.

“MLA has been great in helping set the sensitivity and specificity requirements, and so at this point, those goals are all achievable – but in three separate parts. Now we are bringing all that sampling and diagnostic work together, into one hand-held device.”

Dr Darlington said as a result of COVID, there had been some great advances made in the field of ‘breathomics’ (analysing breath samples for various traits) in humans.

“We’re now working to incorporate those latest developments into what we’ve been doing – including looking at what else we may be able to detect using breath samples (such as respiratory disease, for example),” she said.

“While it’s all still risky – this is first-in-the-world research – the results are proving to be quite robust. It’s gotten to a very exciting stage,” she said.

For producers operating at the scale of her own Carwool station enterprise in NSW, running 800 breeders, the aim was to make the testing equipment a ‘rental proposition’ when it was needed, while larger cattle operations might own their own units. Vets might even provide a pregnancy testing service using the devices, she said.

“It could become part of the standard diagnostic kit-bag of the typical vet,” she said.

The objective, however, was to make the technology suitable for operation by anybody.

“In our testing at home, we regular pass the unit around, and have found that anybody can take the reading,” she said.

About Agscent and Bronwyn Darlington

Agscent was founded four years ago by Bronwyn Darlington, a NSW businesswoman and beef producer from Carwoola Station, a 2000ha cattle and sheep property in the Southern Tablelands of NSW.

As such, she had had first-hand experience with the problems and limitations with current methods of pregnancy testing cattle.

Dr Darlington, whose PhD is in the areas of consumer psychology and behavioural economics, has had 25 years industry experience in a variety of sectors. She has worked in senior roles in mining, engineering, agriculture, local government, finance, and textile and apparel design and manufacturing.

At Sydney University, she has previously coordinated and taught a number of units of study in the Business School including Start-ups and New Opportunities, Business Innovation and Sustainability and is the current module leader for the ‘Finding Opportunity in Disruption’ module of the Global Executive MBA (US).