Already some export processors across Queensland and northern NSW are beginning to factor-in a slaughter cattle supply lull during the first week in May, as up to 30,000 industry stakeholders head for the nation’s beef capital for some entertainment, learning, fraternisation and light refreshment. 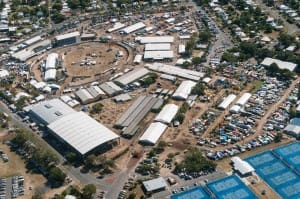 Industry attendance at Beef 2015 in Rockhampton could challenge slaughter cattle supply in early May.

Back in 2012 when the last Rockhampton Expo was held, cattle supply was tight anyway, as Eastern Australia faced the first of two very wet years.

That’s made harder to predict the extent of the event’s cattle supply effect this year, but processors aren’t taking any chances.

While it is hardly likely to be the dominant factor in current cattle pricing decisions, it will be a part of the decision-making process for slaughter cattle livestock managers in coming weeks.

Since our last weekly kill report, two major national processors have raised their Queensland grids by 10c/kg across the board for slaughter cattle booked for the late-April, early May period.

That puts heavy cows for southeast Queensland kill at 395c-405/kg with competitive processors, while four-tooth heavy grassfed steer has lifted to 425-430c (some company grids still as low as 410c, but likely to adjust soon). Milk and two-tooth steers are priced at 430-435c.

While most SEQ processors appear to be comfortable for bookings through the remainder of April, it’s in that period from early May (including Beef 2015 week) where attention is now focussing.

This week’s price adjustment is the second in three weeks for some Queensland processors, lifting rates about 20-25c from their recent low-points. Cows at the bottom of the cycle in February were making 375c, and best steer, 395-400c in SEQ grids. The recent movement perhaps mostly reflects the fact that cattle volumes have been so slow going into, and coming out of Easter, and forward bookings are much lighter than they were, even a month ago.

This week, cattle supply has shown signs of turning around, though, with a very large +13,000 head yarding at Roma store sale yesterday – the largest seen in close to 12 months and up there with the largest Roma yardings ever recorded.

Southern physical cattle markets have recorded some substantial upwards price movements over the past ten days, typified by Wagga sale on Monday, and particularly strong Wodonga and Naracoorte sales yesterday.

That price rise has again stimulated numbers coming to market, but it’s now only a matter of time before normal southern seasonal cycles exert an impact on available numbers.

The Easter rain has prompted many mixed enterprise operators in the south to abandon cattle work and jump on the tractor to get a crop in the ground, which has also helped lift recent prices.

The southern saleyards price jump since early April is perhaps more rain-related, than a broader season decline in numbers – but that is likely to happen sometime before mid-May, southern processors suggest.

How will cattle supply play out?

While there are some variations on the theme, major processors contacted this week were in general agreement as to how cattle supply, and hence price, is likely to play out through the rest of the 2015 year.

Most think adequate supply of slaughter cattle will continue through to the end of June, but July, leading into August, is now shaping as the turning-point for access to killable cattle.

Some processors have expressed surprise at MLA’s revised forecast issued this week, suggesting 2015 cattle slaughter will now reach 8.2 million head, up from January’s forecast of 7.8 million.

One processor questioned the figure, saying high kills during the first quarter just completed would ‘eat into’ the supply of killable cattle later in the year – particularly the final quarter.

“We’re seeing the cattle that would otherwise have come later in the year being processed now – that’s all that’s happening,” he said. “They won’t be there come October.”

South likely to ‘take the lead’ on anticipated price rises

There’s a growing view among processors that southern beef producing areas – Victoria, SA and southern NSW – will be the first to show signs of this year’s much-anticipated cattle price surge, as the sustained two-year extreme high beef kills finally take a toll.

“The price will jump firstly in the south, in response to lower numbers caused by the normal seasonal cycle. That, in turn, will then start to influence slaughter cattle prices further north, as relativities and transport costs take effect,” one reliable processor contact said.

A 15c/kg variation in pricing between northern and southern regions is typically all that’s required for processors to start exerting competitive pressure on the ‘cheaper’ of the two regions.

“Once southern numbers show signs of drying up, cattle prices will rise there quickly. It will then be a matter of how many cattle southern processors want to kill, at those higher price rates. That, in turn will provide greater competitive tension between the north and the south, with the freight differential attached, competing for the smaller cattle pool,” he said.

It won’t be until next week that an accurate gauge of full-week cattle flows starts to re-emerge, after three disrupted weeks.

The return to work on Saturday of the Kilcoy Pastoral Co plant after its routine three-week maintenance break on Saturday will see Queensland’s ‘normal’ slaughter capacity return for the first time since Cyclone Marcia swept through Central Queensland, closing both the JBS and Teys abattoirs back in mid-February.