THE Eastern states weekly slaughter fell to almost unprecedented mid-season lows last week, in the face of sustained supply pressure caused by the past two years of drought-forced herd reduction.

The National Livestock Reporting Service this afternoon reported the seven-day eastern states adult slaughter tally to Friday at just 97,793 head. Barring Christmas/New Year closure periods, and weeks with a gazetted national or state public holidays, that’s the lowest weekly kill seen in Australia since disruptions caused by extensive flooding in early 2011. The likely trend was forecast in this report two weeks ago. 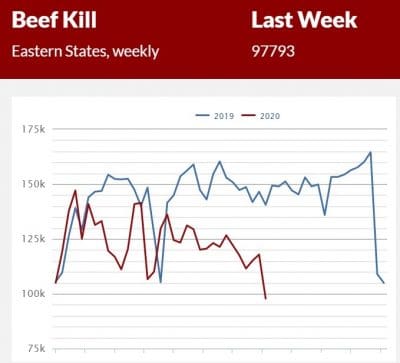 Click on Beef Central’s home-page Industry Dashboard to see graphs. Earlier sharp drops in kills this year are Easter weeks, and the week ending 13 March when kills dropped to 111,000 head after the big rain event.

Last week’s kill was 17pc lower than the previous week, and a dramatic 30pc down on this time last year.

While a Brisbane show holiday last Friday accounted for a small portion of the decline, impacting a small number of plants in and around the state capital, the overwhelming factor was sheer difficulty in sourcing slaughter-ready stock at present. And it came well before JBS Dinmore’s planned two-week closure starting this Friday, flagged in this earlier Beef Central article.

If the trend continues, a decline in national slaughter throughput of this scale will inevitably put considerable pressure on Australian beef’s ability to adequately service key export markets, Beef Central was told.

South Australia was the only state to record progress, lifting 34pc on the previous week, and 8pc on this time last year to 4375 head.

Mid-August is traditionally a difficult time to fill kill rosters, but the challenge has been made all the more difficult this year by the lingering effects of last year’s drought on cattle supply.

Processor rates for slaughter females have shown some signs of softening this week.

One large Southern Queensland processor which previously led the direct consignment market for cows at 385c/kg, has dropped rates 20c/kg this week.

Other competitors this morning showed offers for southern Queensland kills at 560-570c/kg for heavy cows, while steers remained unchanged at 625-640c on four-tooth grassfed heavy steer (some offers at the top of that range are for HGP-free only).

In the saleyards channel, some sales early this week showed a softer trend for slaughter cows, especially further north where one large competitor was not operating. At Warwick (southern Queensland) sale this morning, NLRS reported that cows generally could not maintain the levels of the previous week, with losses of 7-13c/kg liveweight, however some of that reduction in price was quality related. Heavy cows also slipped in price at Toowoomba yesterday.

One of the obvious questions in the slaughter cattle market this week is whether the ‘Dinmore effect’ will have a bearing on cattle prices over the next couple of weeks.

As reported on Beef Central last week, JBS Dinmore – the largest processing plant in Australia – will close for a minimum of two weeks from this Friday. This current week, Dinmore is operating for only two days, suggesting the impact, if any, may already be happening.

But given how tight the overall cattle supply currently is, even the removal of one large competitor like this is having little material effect on competition or cattle price, several trade sources told Beef Central.

Speculation has also circulated about whether JBS will simply divert cattle and expand kills at other sites – Beef City and Rockhampton in Queensland, and Primo near Scone in NSW – to compensate for Dinmore’s closure.

The company says that won’t happen, and Dinmore will simply try to consolidate cattle for a week or two to bolster kills after it gets back to work, sometime in September.

Rumours have also swirled this week about other possible processing plant closures to follow Dinmore’s and JBS Brooklyn’s example. No real evidence for it could be found, apart from the prospect that Bindaree Beef in northern NSW may close for a week later in September, as part of a fairly routine annual closure carried out at the plant each year for maintenance. Low slaughter stock availability and lack of profitability will obviously make that decision easier to make this year, but it is not an unusual occurrence, Beef Central was told.