ANY way you slice and dice it, beef processors have had their worst year in a generation this year, profit wise.

Granted, processors put a lot of pennies in the cookie jar during the record high kill years 2018-19 caused by the drought-driven abundance of cattle, and strong international beef demand driven in part by the emergence of another major export customer in China.

But it was always felt that at some future time, processors would have to ‘pay the piper’ and push most of that cookie-jar of stockpiled margin share back to the producer.

2021 has delivered that in spades, with the cookie jar now looking decidedly empty.

TEM’s processor margin model shows average monthly margins sliding from a loss per head of $357 in September to a loss of nearly $433 in October, the worst monthly margin on record since early 2000 (see graph below).

The October result brings TEM’s annual average margin for 2021 to a loss of $321 per head of cattle processed.

“Everything seems to be going against the processors at present, with cattle input costs increasing by around 3.2pc during October, operating costs increasing by 2.2pc and average beef export revenue values falling by 2pc,” Mr Dalgleish wrote. The only gain for processors was a 2.7pc increase in average co-product prices.

There have been some strong gains in beef export prices in recent weeks (see earlier Beef Central report), which may show some respite for processors in the next update to the margin model later in December.

But it would depend on how much higher domestic cattle prices can go with the EYCI hitting a new record high of 1111c/kg cwt recently, and direct consignment rates rising to new record highs during November (see earlier Beef Central weekly kill report). 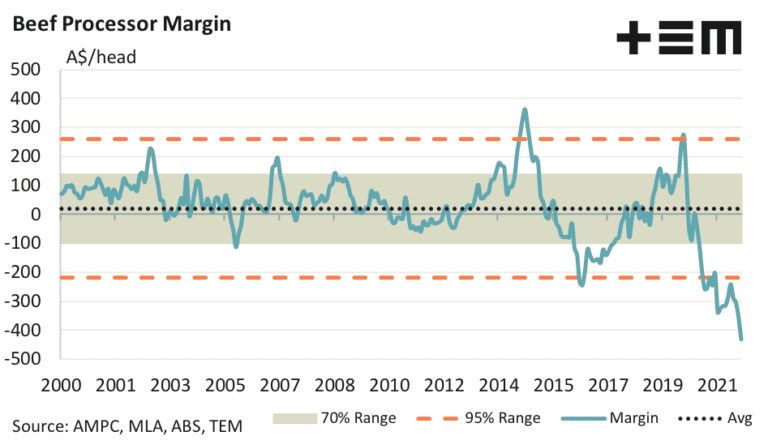 While the graph above appears to illustrate that the processor margin (or loss) has become much more erratic in the past six years, it does not reflect the dramatic rise in value of both cattle and beef over that period. For example, a $100 loss on slaughter cattle in 2005, was far more significant than the same loss in today’s trading terms.

For that reason, the graph below attempts to remove some of the dilution of profit/loss impact in percentage terms, by overlaying the processor margin as a proportion of the heavy steer price. 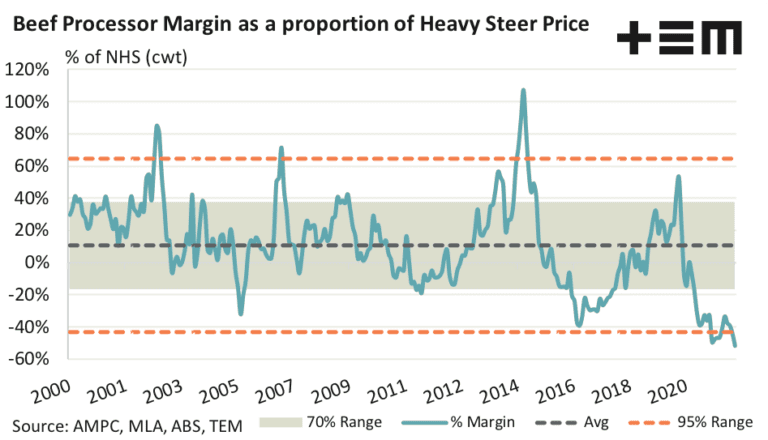 The graph above shows that in percentage terms the October processor margin losses were the worst on record, even accounting for the current high cost of cattle. On a proportional basis, margin losses in October were at 52pc of the heavy steer price, which is beyond the historic extreme loss boundary, as identified by the 95pc range (orange dotted line).

“Indeed, anyway you want to look at it, this is the worst time we have seen for Australian beef processors,” Mr Dalgleish said. “It is likely we will start to see some rationalisation of the sector into 2022 as it looks to be a while before beef processing will get back to a more positive margin outcome.”

Major arterial beef road closures have occurred overnight in both Queensland (Warrego Highway between Roma and Dalby, and Burnett Highway) and along the NSW border. RACQ has more than 349 Queensland road closures listed on its website this morning. Parts of NSW are similarly impacted.

Several processors told Beef Central they will skip days this week, as a result of short supply caused by rain, but were unlikely to lift prices again, beyond what are already record highs, in the vain hope of consolidating supply.

After a series of sharp rises three weeks ago, competitive export beef processors in southern Queensland are this week offering a record 790-810c/kg on four-tooth heavy grass steer, up as much as 30c/kg on previous rates, and 750-775c/kg on heavy cows.

Some operators are still offering those quotes with a fortnight’s lead, suggesting the current rate is more than just a reflection of short-term difficulty in supply caused by recent rain.

For premium lines, rates this week are showing 815-820c/kg for MSA yearling steer 0-2 teeth, with certified grassfed programs in Queensland starting at 830c/kg this morning. Good MSA grainfed yearlings for major supermarket programs are this week fetching well north of 900c/kg in some regions, with some forward contracts in the south at 920-930c heading into summer grilling season.

The NLRS over the hooks report for this week shows cow grids in Victoria topping at 740c/kg, with grown steers as much as 830c. In NSW, both heavy cows and heavy grass steers were making up to 730c/kg.

The national beef kill for the week ended Friday continues to struggle, accounting for just 96,282 head, up 1pc on the week before.

With the first of the early seasonal plant closures happening in central and North Queensland this week, numbers will inevitably decline further from next week.

Beef production in Queensland remained heavily constrained this week, producing the lowest tally since February for weeks unaffected by public holidays, at just 45,046 head. The female portion of the Queensland kill last week reached just 31.3pc, as low as it has been all year.

South Australia’s kill was week was steady at a little below 3000 head; Tasmania lifted considerably to 4173 head, its largest kill in almost five months; and Western Australia edged a little lower to 3214 head.

More Christmas plant closure dates have been released this week. JBS has now shut its Townsville plant for the season, with plans (weather permitting) to re-open on January 18. JBS Rockhampton’s last kill is 17 December, and Dinmore’s last kill is 16 December, returning to work on 14 January.