The benchmark 90CL grinding beef price for Australian beef sold into the US hit A864c/kg (CIF) on Friday, up 57c/kg on two months ago and easily its highest point all year. 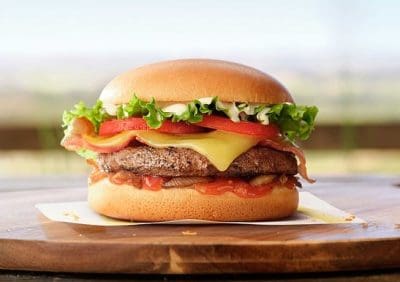 At the start of this year, the same lean manufacturing beef was selling into the US for around A615c/kg – a 40pc rise in value since then.

When valued in US currency terms, imported 90CL frozen cow beef in the US is fetching a premium of at least US15-20c/lb over equivalent US domestic product.

The ‘dear end’ of imported 90CL is selling this week around US300c/lb now (FOB port) export trade contacts told Beef Central this morning, with 95CL around 325c/lb and above.

Save for a brief two or three-week period back in December 2019 when Chinese and US buyers hit panic mode over meat supply, it’s the highest price ever seen in A$ CIF terms. There was one earlier point around 2014 when the US was recovering from drought with short domestic kills when imported prices flirted briefly with US300c/lb.

Some trades this week were above US300c/lb, one trade source said, but suggested it was still ‘not a lot of money’ in relative terms, when options like the domestic market or McDonald’s Asia was considered. One packer yesterday quoted above A900c/kg for fattier frozen 85CL trim for an Asian destination customer, but it is not clear if a deal was done at that price.

On top of that, the domestic Australian market, heading into summer holiday and grilling season, continues to soak meat up at astonishing levels, the trader said.

A softer currency is certainly helping improve Australian beef’s competitive position in export markets, and take some of the pain out of current record high livestock prices for processors. The A$ has continued to ease during November, falling from above US75c at the start of the month to 72.2c today.

Also helping underpin recent imported beef prices in the US has been low New Zealand kill, and limited supply in the spot market, as US importers and end-users struggle with supply chain bottlenecks and higher transportation, labour and warehousing costs.

A prominent export meat trader told Beef Central this morning that few larger-scaler US imported beef customers were ‘biting the bullet’, preferring to live hand-to-mouth in supply, for fear of being left with expensive product in storage if prices should fall away again.

“They are obviously trying to work around the current price issues with imported lean by getting as much domestic US manufacturing beef as they can, if their programs can use it – because it is cheaper,” he said.

Currently, imported 90CL cow beef was fetching a premium of at least US15-20c/lb over equivalent US domestic product.

The other factor was other export markets competing for the same Australian manufacturing beef. New Zealand is currently still in its low dairy cow kill period, and in fact had started selling lean bull meat to the US again, in the absence of cow meat volume.

Also adding to the shortage in the US was the fact that suppliers were not selling to customers on the west coast of the US because of the port congestion and shipping issues, and still minimising shipments into the US east coast. In New Zealand’s case, apart from bull meat, they were preferencing customers in Asia, because the shipping challenges were so much easier.

Another trade source estimated that about 80pc of recent US imported beef trade continued to arrive via east coast ports, rather than west coast because of the logistics challenges in the US.

Some in the export trade have been surprised that when Brazil was knocked out of the China market two months ago due to a BSE detection, that at least some of that huge volume might be diverted into the US market.

“Yes, there has been a little more Brazilian beef appearing in the US during October/November, but it’s not a huge amount – and certainly not enough to dilute demand for Australian product,” the trader said.

The only supplier country that had recorded any real increase in volume into the US this year was Canada, but that had not gone close to making up this year’s shortfall out of Australia/New Zealand product.

Reflecting the chronic shortage of manufacturing beef production that’s happened in Australia this year due to herd rebuilding, the female portion of Queensland’s kill last week reached just 31.4pc, as low as it has been all year.

Forecast for next year

Asked for a forecast of export lean grinding beef prices heading into the new year, the trader said he thought that while prices might not advance much further now, they were likely to ‘stay up there’ around current levels.

“Demand for beef out of the US remains pretty good,” he said.

“The US beef cut-out has come back in price on a lot of cuts, but that’s then just meant that the more price conscious items like mince have become even more popular. And the US market is yet to see the fourth-wave COVID outbreaks, like those reported in the past week out of parts of Europe.”

As it has in the US all year, the domestic cow kill remains stronger than normal, but it just keeps on getting absorbed by a meat-hungry US population.

“Normally domestic fresh 90CL beef drops off a bit of a cliff in price in the US about now, but it remains strong this year,” the trader said. “US quick service restaurants (like McDonald’s) continue to struggle a little, but the whole retail beef complex in the US remains very robust.”

From the supply-side perspective, little was likely to change out of Australia next year.

“Some Australian plants that normally close for two weeks around Christmas are talking three and four week breaks so beef production will remain tight in the medium term.”

“I don’t think the market will go nuts from here, but I think it will just bubble along somewhere near current price levels.”