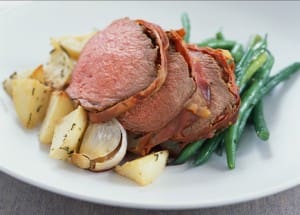 High Pressure Processing applies pressures as high as 600 MPa – the equivalent of the pressure that would be experienced a a depth of 60km below the ocean’s surface – to meat or other foods sealed in cryovac packaging.

The process is sometimes called cold pasteurisation. One of its key attractions is that it does not affect the flavour or nutritional properties of the food being treated, as cooking or other preservation processes can, and eliminates the need for preservatives.

Beef Central first wrote about High Pressure Processing and the attractions it holds for the red meat industry in this article, “Putting the pressure on e.coli.”

HPP acts instantaneously and uniformly throughout a mass of food independent of size, shape, and food composition.

While the process is not yet in commercial use in Australia, it is already being adopted in the US beef industry, in a variety of applications. One of the largest US producers of smoked briskets, pulled meats and other smoked/cooked deli-style items, Sadler’s Smokehouse, has incorporated HPP pasteurisation systems within its operations, to enhance shelf-life and reduce pathogen risk.

A recent video produced by MLA focuses on more recent CSIRO HPP research supported by the MLA Donor Company, examining how the combination of high pressure and heat may offer new opportunities for processing, in not only improving preservation characteristics, but also enhancing tenderness in certain cuts.

As with any new technology platform, the learning curve has continued by exploring the HPP mechanisms at various time, temperature, pressure settings and muscle profiling – which was a key focus for a Weribee workshop held later last year, at which this video was shot.

The overall objective of the project was to compare the impact of HPP at low and higher temperatures to other interventions and cook methods – in particular, evaluating tenderisation, colour and yield for several beef cuts.

Combinations of lower temperatures, time and pressure produced much less tenderisation effect. However, when pressure (600 MPa, 15 min) was applied at 90°C, there was a definite muscle difference, with chuck and brisket meats significantly tenderised.

“This could be include in a potential Meat Standards Australia pathway.”

Beyond that HPP as a technology platform may enable value-adding businesses adopting the technology to ‘cook’ raw meat packaged and HPP treated similar to sous vide technology, but achieved in 15 minutes instead of six hours, as is common with sous vide. The result is similar eating quality but with improved yields.

The meat can be placed in the retort pouch for HPP treatment either on its own or with a sauce to produce tender, highly-flavoured dishes.

MLA chef Sam Burke, who puts the technology to the test in the new MLA video accessible below, described it as “achieving the same results as four or five hours of slow-cooking in a secondary cut in just 15 minutes.”

“HPP has the added bonus of enhancing shelf-life and reducing the use of additives and preservatives while maintaining colour, flavour and freshness,” he said.

The technology already operates across the world, but mainly for the cold pasteurisation of smallgoods, ready-to-heat meals and beverages.

“By applying heat, it opens up the technology to a whole range of new uses, particularly in foodservice,” MLA’s video says.

MLA has now finished current research projects around HPP, and is seeking expressions of interest from companies wishing to pursue the use of the technology with red meat.

Already a value-added cooked chicken product with extended shelf-life using HPP has been released by Moira Mac’s, with packaging making strong ‘preservative/chemical-free’ claims. The products are available in major supermarkets.

Moira Mac’s claims this is the first use of HPP in Australia for meat proteins. Discussions have been held with HPP service-provider Longfresh over the development of a similar pre-cooked roast beef product.

The HPP process has the potential for food producers to expand their current markets and to meet the rising consumer demand for foods that are safe and nutritious, free from additives, good tasting and have a long shelf life to provide customers extra convenience for chilled red meat products.