ANY way it is sliced and diced, labour access is shaping up as a key limiting factor in Australian red meat processing output, and hence potential slaughter cattle demand, during 2023.

Last year was plagued at times by labour shortages due to COVID sickness issues, lack of overseas assisted visa labour and the general underlying staff shortage. Despite the COVID fog clearing, this year is shaping up no better – and arguably worse – given the rising supply of slaughter cattle coming to market after herd recovery.

Could it be that Australian red meat processing at some point in 2023 reaches maximum capacity with its limited workforce, leaving surplus (perhaps less desirable) cattle looking for a home? Could this in turn be a key determining factor in cattle price – over and above simple supply and demand – in a year when livestock supply is starting to rise?

All points to ponder as the 2023 slaughter season slowly gets back on its feet.

While the red meat industry is an acute case, all Australian businesses are crying out for more workers, with the country in the middle of one of its largest-ever labour shortages.

According to data from the Australian Bureau of Statistics, there were more than 444,000 national job vacancies in November, 95pc higher than the figure for February 2020, prior to the start of the pandemic. In November, almost 30pc of all businesses in Australia were reporting vacancies.

Earlier ABS data released last year suggested almost a third of all employers were struggling to find suitable workers. Most of it (79pc) was due to a lack of applicants, with applicants not having the required skills a lesser factor (59pc). A separate NAB survey in the June quarter last year found that 53pc of all businesses were reporting labour as a significant restraint.

While there is high demand for workers, businesses are struggling to fill those vacancies. Australia’s unemployment rate in December sat at 3.3 percent, a 48-year low, and the proportion of the adult population holding a job or actively looking for work hit a record high 66.7 percent.

He scrutinised the internet vacancy index showing average monthly job ads for a variety of professions. 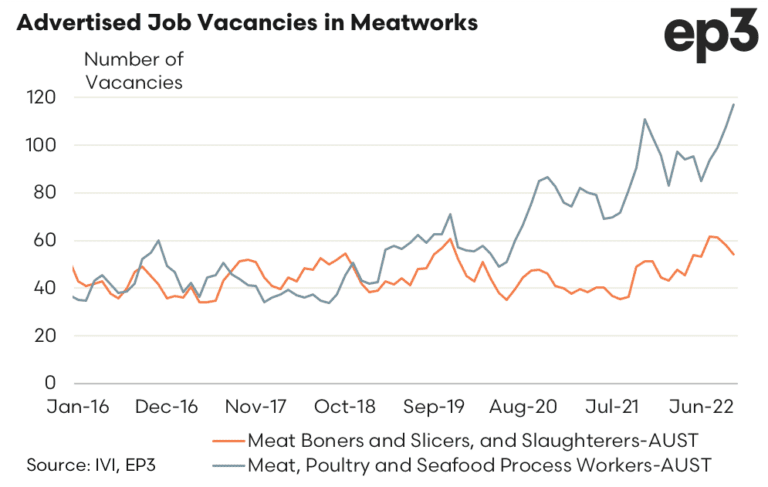 A look at the two key processing roles in abattoirs since 2016 shows that there has been a substantial increase in job ads, particularly for meat processing workers.

Some of this recent decline (orange line) may simply reflect processors ‘giving up’ in the search, one processor contact suggested.

In percentage terms the current number of job ads for meat processing workers is 244pc higher than the levels seen back in August 2018.

Backing this up is anecdotal evidence from one large export meat processing company this week. It has managed to recruit just 75 new staff for the 2023 season at one of its southern Queensland export plants, out of initial interest from 1600 people.

It leaves staffing levels alarming short of what is required, and in this processor’s case, is having to make some tough decisions to ration available labour out.

One of these has been to abandon certain value-adding functions in areas like the offal room. While this saves a few jobs along the way, it also leaves carcase value on the table – in some cases simply directing the raw material into the by-products stream.

Direct consignment slaughter grids in southern Australia have dipped further this week, while those in Queensland and northern NSW remain steady – albeit after some dramatic fall earlier in January.

Best offers seen from competitive processors in southern Queensland this morning were 580-590c/kg on heavy cows – down from 635c/kg mid-December, before falling to 605c on some grids briefly just before seasonal closure. Four-tooth export weight slaughter steers with HGP were quoted at 650-655c this morning, back 35-50c on mid-December rates. Central Queensland operators were offering 10c/kg less, although weather disruptions due to last week’s heavy rain may add delivery delays.

However some processors have withdrawn quotes for the timebeing, Beef Central was told.

In southern states, representative quotes have heavy cows 560c/kg this week, back another 10c/kg. and 650c/kg on grassfed export ox no HGP, down another 25c from earlier rates.

There’s evidently been a substantial slow-down in producer interest in doing business this week, possibly in response to the big reductions described above. Another potential factor is that in most parts of the country this is ‘back to school’ week, suggesting some producers may be pre-occupied briefly with family matters.

One Queensland processor said his business would simply drop working days if cattle could not be procured at current rates, such was the poor state of the beef export market.

There was no NLRS weekly kill report available by the time this item was published. Results for last week’s kill will be added here, when they arrive.