AN Irish emigrant to Brazil who has worked for JBS for the past 20 years has been appointed as the company’s new chairman.

Jeremiah O’Callaghan, who has worked for JBS SA since 1996, most recently as the company’s head of investor relations, was announced as the board’s new chairman on Friday. 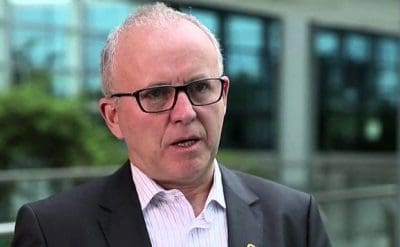 As readers will recall, JBS Brazil and its major shareholders the Batista family have been engulfed by a corruption scandal in recent months.

Mr O’Callaghan replaces Tarek Farahat, who served as chairman only since May, when he succeeded Joesley Batista. Both Joesley Batista and his brother Wesley remain in jail.

Also on Friday, JBS announced the election of four new independent company directors, as the company moves to distance itself further from the disgraced Batista brothers.

Wesley Filho served as president of JBS operations in Uruguay, Paraguay and Canada, and also led the beef operations in the US at one point. Recently, he assumed the presidency of JBS in South America.

JBS now has a nine-member board of directors, including four independents that meet strict independence criteria set out by the government. The moves were approved by Brazil’s ag lender, BNDESPAR in accordance with the terms of the shareholders’ agreement with the troubled company.

Resigning as directors on Friday were Tarek Farahat and Norberto Fatio, who join Mauricio Luis Luchetti and Claudia Silva Araujo de Azeredo Santos, who resigned at the end of August.

Incoming chairman Jeremiah O’Callaghan said he was convinced that the composition of the new board, including professionals with extensive experience and four independent members, was an important milestone in the strengthening of JBS’s corporate governance.

“I’m confident that this board will continue to provide support to the initiatives of the company’s officers for the prosperity of the business, as well as in promoting its relevant social function,” he said.

An engineering graduate from Cork University, 64-year-old Mr O’Callaghan emigrated to Brazil in 1979. He started work in Brazil’s meat industry in 1983 with Mouran, then Brazil’s largest beef processor. He then moved to tinned corned beef manufacturer Bardon, before joining JBS in 1996. Both Mouran and Bardon became JBS-owned companies.

His role with JBS was described as helping develop JBS’s international business. For the past ten years he has been JBS’s head of investor relations, representing JBS with local and international investors and stakeholders.

In an interview in Forbes magazine in 1996, it was reported that the Batistas brought Jeremiah O’Callaghan into their company, with the objective of taking JBS global.

“I was like a kid in a toy store,” Mr O’Callaghan said at the time. “I found a company that said just go ahead and do it.”In these short video recorded in 2012, Mr O’Callaghan outlines JBS’s expansion into international markets, including the US and Australia.

Tarek Farahat will continue to serve as JBS’s global advisor, with the mission of supporting governance and the international development of JBS, a company statement said.

In the statement, Mr Farahat outlined what he considered his achievements to have been as JBS chairman. These included hiring a Global Compliance Officer, and implementation of a “robust compliance program in Brazil,” with the engagement of about 800 JBS business managers.

In addition, the company formally adhered to the Leniency Agreement signed between the Controlling Shareholder of JBS (J&F) and the Federal Public Prosecutor’s Office.

“We were also able to secure a Stabilisation Agreement between the company and commercial banks in Brazil, resulting in an improvement of its debt profile. During this period, a divestiture program was also successfully implemented, thus reducing indebtedness and allowing the company to focus on its main businesses,” he told shareholders.

He said his priority as JBS’s global advisor would be to act on corporate strategy, governance and communication.

“My goal is to strengthen the company, implementing and adhering to the best global standards of governance and transparency,” he said.

Meanwhile, Brazilian media has reported that the country’s securities regulator has opened an investigation into Mr O’Callaghan’s recent actions.

The Brazilian authority, CVM, last week accused him of violating his duty to inform markets by not questioning JBS managers and controlling shareholders in relation to the plea bargain deal signed in May.

JBS recently withdraw its proposed $1 billion US public float of most of its global business, except for the Brazilian operations. The withdrawal is a blow to plans to restructure the company and improve access to a broader base of investors.