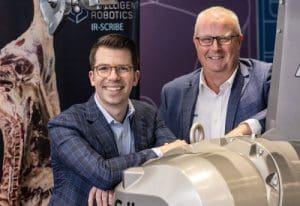 AMPC chief executive officer Chris Taylor said there had been some fantastic networking at the three-day showcase at the Melbourne Showgrounds and it was a great opportunity to demonstrate innovations ready for, or close to, adoption.

“The industry has had an opportunity to see that first-hand – to try on some exo-skeleton gloves and see all the different bits of kit in-situ,” he said.

“It’s also been brilliant to see new technology providers talking to each other and thinking about new ideas and potentially working together on what the next big thing might be.”

Bondi Labs general manager Jonathan Marshall said he had been working in biosecurity and agriculture for nine years and this was the first time AMPC/processor innovation managers, industry and government people, suppliers of technology and innovation companies had been brought together.

“You go to certain places where there are just vendors trying to sell a bit of kit, here everyone actually has a bit of an R&D mindset, so they are talking with those industry partners around how to work together to address those problems.

“That is really quite unique.” 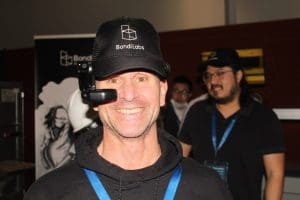 Mr Marshall said he was working with processors that had an innovation culture to solve problems, supported from the top down.

“I think this ‘business as usual’ isn’t going to survive and I think this environment allowed everybody to bring that sort of thought process (innovation) together.”

Mr Marshall said interactions between the showcase participants would help provide solutions to some of the industry’s challenges, and increasingly around in the areas of sustainability, biosecurity and regenerative farming. Whereas investment in these areas had been seen in the past as costs, improvements in traceability and verification were now seen as opportunities underpinning the business’ future.

Mr Taylor said drivers of innovation included cost, but also the need for better accuracy in meat cuts and solving some of the industry’s sustainability challenges.

More than 40 examples of emerging technology

Mr Taylor said the innovation showcase was an immersive and interactive event, allowing red meat processors to see how R&D solutions could be used in their businesses.

“The Innovation Showcase was about equipping Australian red meat processors to continue delivering world-class products and creating jobs in the communities where they operate.

“The showcase proved the future of the red meat processing industry is exciting, and regional communities together with R& D providers will continue to power this industry.”

AMPC is currently involved in about 300 R&D activities across Australia.

“We wanted to give processors a chance not only to understand the breadth of what we are doing, but to understand what is coming for the industry and what might be relevant in their own business so they can make confident decisions around where to invest,” Mr Taylor said.

The event featured 11 panel discussions and presentations from innovators and futurists, and it also highlighted the need for new funding resources including global partnerships, and understanding how novel approaches to drive sustainability outcomes could also deliver improved bottom lines for processors. Topics covered by speakers ranged from the use of artificial intelligence in processing plants to the evolution of the circular economy.

“The circular economy is about optimising the use of resources, and of course sustainability is an important outcome, but it’s also about how we get the absolute maximum value out of the products we create.

“That means utilising technology to transform waste into energy and other saleable products. All this sits alongside other sustainability goals like re-using water and managing energy usage,” he said.

Mr Pagett said the showcase was also one of first networking opportunities for the AMPC innovation managers embedded in processing businesses since the positions were established two years ago.

“By getting the group together we were able to start to find ways around the natural competitive tension within the industry and start looking at big picture opportunities that could benefit everyone.”